Share All sharing options for: It's Not Plagiarism If You Link To It Apologizes A Trillion Times

It's Not Plagiarism If You Link To It is BHGP's regular news roundup. Send all tips to any of the email addresses at the bottom of the page. We even welcome comments from glad-handing nonsensical douchebag yes-men.

* Bang Zoom To The Moon!  Yeah, yeah, Marcus Coker is the most exciting running back to wear a tiger hawk since Shonn Greene used and abused defenses in 2008 (although Brandon Wegher's Superman act in 2009 was also pretty damn exciting).  He's also probably the Iowa player whose listed major(s) will turn the most heads when the TV networks inevitably discuss that topic next fall.  Look at the big brain on Marcus:

One of the reasons he chose Iowa out of DeMatha Catholic High School in Maryland, he said, was the school's department of physics and astronomy. Coker is pursuing a double major in both fields and says his dream is to some day work for NASA.

A Hawkeye in space?

Physics and astronomy?  Hot damn.  That's a far cry from "Mass Communications" or "Interdepartmental Studies." And, yes, the fact that he's apparently able to balance that courseload with the starting running back gig at Iowa (and all the work that entails) does make us feel wildly inferior.  We promise to get over it if he puts up a few more performances like the Insight Bowl, though.

And while Coker says he wants to stay earthbound, I don't think he should rule out a trip to space so easily... 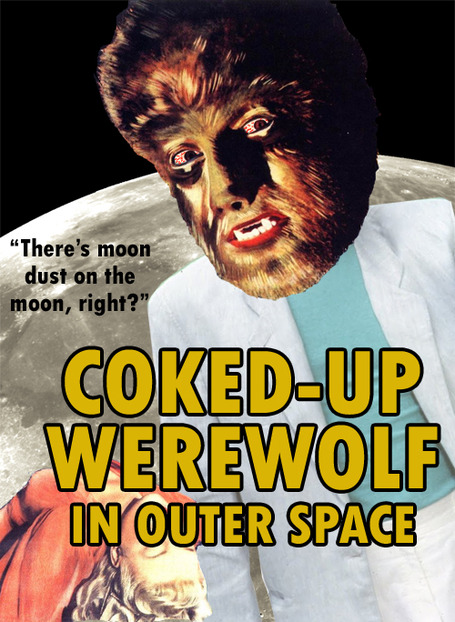 TFJ to Horace E. Cow for his image assistance.

* No one told me there would be math.  But someone really should have told that to Josh Oglesby, since a bad grade in a high school math class is preventing him for officially joining the team until fall, meaning he's hanging out at home this summer and making the arduous trek from Cedar Rapids to Iowa City and North Liberty for self-directed practice and PTL hoops.  Would you believe that Fran wasn't too pleased with this turn of events?

"I had a meeting with him a couple of months ago because he was disappointed in my math grade," Oglesby said. "I got it up by the end of the year, and I had a meeting with him. He chewed me out for a good 20, 30 minutes and then after that … he said he didn’t offer me a scholarship to come in my freshman year and be a star my senior year. He said he wants me to play next year."

BHGP spiez brought us this exclusive footage from their meeting: 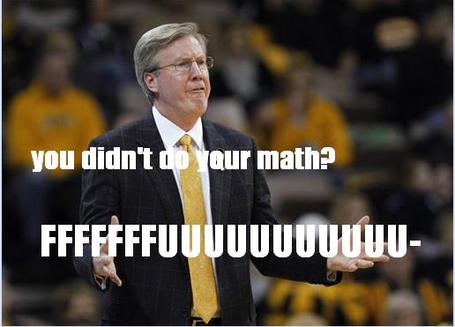 Oglesby's expected to have everything ship-shape by fall; hopefully he stays away from the math classes.

* Advanced Studies in Cheese Curdology.  The hottest free agent quarterback on the college football meat market opted against following in the scandal-clouded footsteps of Cameron Newton and invading the plains of Auburn; instead, former North Carolina State standout Russell Wilson is shipping up to Madison to join the Badgers in their quest to win a national title win the Big Ten consume every last bit of beer and cheese in the state of Wisconsin.  Or maybe he just had a closet full of red and white gear and couldn't bear to part with it.  Some pundits are hailing this as a game-changer that sets up Wisconsin as the Big Ten favorites and even makes them a more trendy pick to bring home a national title.  Our blog brethren at Off-Tackle Empire and Bucky's 5th Quarter seem to be taking a more cautiously optimistic stance, which is frankly no fun.  On one hand, it seems like these high-profile transfers often work better on paper than in practice (hey there, Jeremiah Masoli!), but on the other hand, Wilson will probably just be able to hand the ball off 66% of the time and throw a play-action pass every fifth play and call it a day.  It doesn't really matter to us until they play Iowa in the Big Ten Championship Game and we take back our damn trophy.

* Ticket pricin'.  Hlas breaks down what it would cost to attend every Iowa football game this fall with face-value single-game tickets ($801, if you're curious), but the most telling detail in his piece is this:

Purdue is charging $65 for Notre Dame and Ohio State, but just $46 for Iowa, Illinois and Minnesota.

Iowa is lumped in the same Loser's Club as Illinois and Minnesota?!  Iowa, your Most Hated Rival?  THIS IS AN OUTRAGE THAT WILL NOT STAND.  I for one propose that we buy all of their cheap tickets and invade Ross-Ade Stadium and show them how much we detest them.  By, um, selling out their football stadium and spending money at their local establishments.  Okay, so this plan has a few holes.  BUT THE OUTRAGE IS STILL STRONG, PURDUE.

* It appears that the final chapter has been written in the long and sordid Cedric Everson saga.

* Live in the Quad Cities?  Like Iowa football?  Then you may want to hit up the Legends of Iowa Football Camp.

* Reason #692 that Bill Callahan was a gigantic boob: He didn't even offer Shaun Prater a scholarship.

* Tim Floyd is headed to the Iowa State Athletic Hall of Fame (hey, he didn't drive them into a sanction-induced wasteland of preside over the worst era in Chicago Bulls history); meanwhile, Larry Eustachy and Gene Chizik are still waiting for their courtesy calls.

* JoePa is really getting the hang of the interwebs.