Share All sharing options for: Profiles in Boldness: Kirk Ferentz

NOTE: The following post is sponsored by Nestea BOLD, the company responsible for making the sidebars look like Boiled Sports. 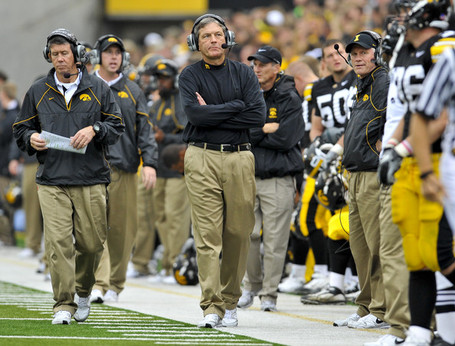 Check that style.  Sneakers, white.  Khakis, pleated.  Turtleneck, mock.  That's not stuff you can find anywhere.  That's not a one-stop trip to the store.  That's walking into JC Penney and hitting the Nautica section AND the sportswear section.  Praise this dude to the most fly, Dockers.  That impeccable style just oozes from his pores.  Check that coaching staff, all the khakis pleated like so, all the hair parted.  You match the look, you match the boldness.

That style translates, too, to his team's play.  This team isn't afraid to make bold decisions and run the exotics.  Iowa always picks up high school quarterbacks and track stars to put at wide receiver so that they can throw insane trickeration at their opponents all the time.  Take a look at this crazy trick play, pulled from the hat of offensive coordinator Ken O'Keefe:

And if that wasn't enough, this trick play is just sick:

Iowa will do that to you at any time.  They'll throw out that end around, or maybe an end around mistakenly called a reverse by the television play-by-play guy, or a wideout pass when up 30 on Michigan State, or a halfback draw on third and 26 OUT OF NOWHERE.  That's the thing with the Iowa offense: You never know what you're gonna get.  It's like a 'box of boldness' [via Forrest Gump].  O'Keefe is an offensive genius and bold as hell, fools.

If the offense is bold, the defense is crazy sick bold.  You want to run single-back against Iowa?  Norm Parker will throw a 4-3 cover 2 on you so fast your head will spin.  What about the I formation?  BOOM 4-3 cover 2!  Deal with that!  What about four-wide shotgun?  Betcha can't handle this 4-3 cover 2, mofos!  Single-wing?  FOUR. THREE. COVER. TWO. The glasses fall down on Norm Parker's nose and he says you should deal with it.  He boldly rushes four on every pass.  He boldly leaves three linebackers on the field against five wideouts.  Dude's bold as all get-out.

Break out your dictionary and look up the word 'Bold'.  I'll bet you find a picture of Kirk Ferentz.  And, even if not, you'll find the definition of 'bold' which obviously applies to Ferentz.  Kirk Ferentz is so bold, he makes Lady Gaga look like a nun.  Kirk Ferentz sends every email in Arial Bold font.  One time, Kirk Ferentz went bowling, and they changed the name of the sport to 'bolding' in his honor.  When Iowa played in the Alamo Bowl, they called it the Alamo Bold.  Iowa football is bold, and it's because their head coach is the boldest mother in organized sports.