Share All sharing options for: Caring Is Creepy 2012: Have A Seat, Drew Ott 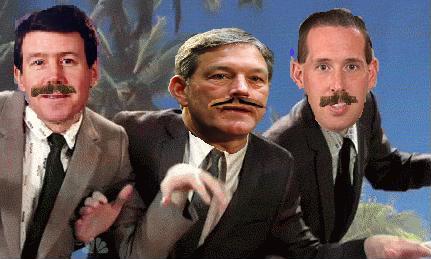 The Iowa coaching staff on the hunt.
Creepy Christmas (Creepmas?) continues!  Two days after scoring their second verbal commitment of the 2012 campaign (and their first in months), Iowa struck again, snatching TE/DE Drew Ott out of Nebraska.  Ott ticks off a lot of boxes on your Prototype Ferentz-Era Iowa Recruit Checklist:

Positionally versatile?  Check!  Nebraska recruited him as a tight end (though they didn't offer him); Iowa is bringing him in as a defensive end.

Multi-sport star?  Check!  In addition to football, Ott led his team to a basketball state championship last winter, and excelled at track in the spring.

Under the radar?  Double-check!  Not only did he not have an armful of big-time offers (his other BCS offers were Kansas State and Ohio), but he played eight-man football in small-town rural Nebraska (Giltner, population: 389!).

Not surprisingly, most of the recruiting services don't think too highly of Ott yet -- ESPN and Rivals haven't even really ranked him amd Scout made him a 2*.  (247Sports thought a little more highly of him, though, making him a 3*.)  But Ott fits the profile of any number of past Iowa players.  Chad Greenway springs to mind most readily, since he was another 2* recruit from a rural area in a neighboring state who played a slightly different type of high school football (nine-man football in Greenway's case).  Current player (and potential defensive line starter) Dominic Alvis is another comparison, as a talented multi-sport athlete from rural Iowa who was lightly recruited.

Highlights for Ott are a little light, unless you want to watch him unleashing a thunderous* dunk, although FOTP PlannedSickDays was able to dig up this highlight reel.  Ott appears to be a classic "hurry up and wait" Iowa recruit; he'll almost certainly redshirt as a freshman, bulk up, and spend the next few years on special teams.  It's unlikely his name will be on the tip of your tongue come fall 2012; file it away for use in about three years.