Share All sharing options for: The PTL Lifestyle, Game 2

Here's a quick rundown of the scores:

I didn't see this one, but Eric May had another impressive scoring line, going 11-19 and finishing with 26 points.  Bryce Cartwright made his 2011 PTL debut, going for 20 points and 7 assists, and Gabe Olaseni made his debut, recording a quiet line of four points and four rebounds.

This was the game I watched start to finish, and it was a good one.  I really thought Monica's/L.L Pelling, with its advantages at center (Devon Archie) and small forward (Devyn Marble), not to mention its overall athleticism, would run away with this game, but it didn't play out that way, mainly thanks to good shooting by Coaches Corner/Two Rivers Bank, and one UNI player (more on that later).  Marble had another very good game (27 points on 11-22 shooting), mixing in drives with a variety of hesitation jumpers and fadeaways.  I caught a post-game interview where Marble mentioned that he is playing with a "whole new swagger" this summer, which is true.  He just looks much more confident in his offense and jump shot, and his defense is as good as ever.  It will be interesting to see how Fran incorporates the newly beswagged Marble into the offense next year.

Anthony Hubbard played well for Coaches Corner/Two Rivers Bank (11 points/9 rebounds), although he couldn't get to the rim quite as easily against Monica's zone defense and height.  The real star of the game was, unfortunately, a UNI Panther.  Anthony James, a waterbug point guard in the mold of Aaron Brooks, was by far the best player on the court yesterday.  He was lightning-fast in transition, quick off the dribble, and, when the defense sagged off him, deadly from outside.  He finished with 32 points on (I think) 12-19 shooting, and made a crucial three to break a 94-94 tie with 1:20 left. It's not too surprising he did so well here -- he was, just looking at the statistics, arguably the Panthers' most efficient player last year: second in scoring, 54.2% on twos, 41.3% on threes, team-bests in eFG% and true-shooting percentage at 56.7% and 59.5%, respectively.  Those efficiency numbers, especially for a player who is 6'0" (maybe) and 175 pounds, are pretty dang impressive.  Now that Kwadzo Ahelegbe has graduated, I wouldn't be surprised if James becomes the Panthers go-to player.  And just as a side-note, it seems like every UNI player in the league has a pretty well-developed offensive game: James, Matt Morrison, Matt Bohannon, even freshman Chris Olivier was scoring inside on Devon Archie with some subtle post moves.

Oh, and just for fun, here's a logo for the Coaches Corner/Two Rivers Bank team, the Fightin' Plutocrats.* 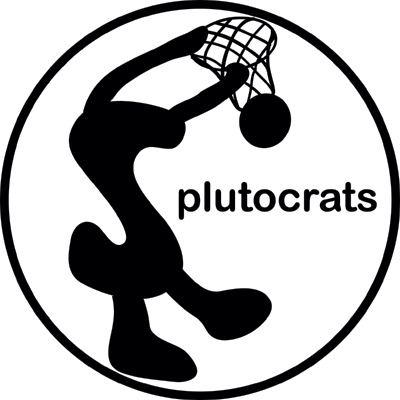 * Bankers serve an important function in our society and are not all mustache-twirling, monocle-wearing tyrants.  And Coaches Corner is a restaurant, I think, or some sort of corner, so that doesn't really fit at all.  But the idea of a dollar sign dunking in the manner of Shaquille O'Neal's Nike logo was irresistible.  Shaq doesn't hold grudges or retaliate, does he?

This game featured the 2011 PTL debuts of Matt Gatens and Melsahn Basabe, as well as another chance to check out incoming freshman Aaron White.  Gatens looked like he could get points in his sleep in this game, everything was working so smoothly for him.  He finished with 26 points, six rebounds and five assists.  White had 12 points and six rebounds, and showed off some nice ball-handling skills for a guy his size.  It's pretty fun to watch a 6'7"/6'8" guy grab a board and just steam up court with the ball without hesitation, and White has the skill to do that.

Basabe had a pretty wretched game, going 7-24 on his way to 22 points.  I'm willing to chalk some of that up to fatigue from the U19 camp and travel, but Basabe was really forcing things, committing turnovers and resorting to awkward contortions to get his shot off.  This got me thinking about Basabe, and what an odd hybrid player he really is.  If you'll permit me to ramble for a minute....

One thing I noticed looking at Basabe close up is that, for someone who plays power forward and the odd minutes at center, he is not a big guy.  When he stood next to Zach McCabe while they waited for a free throw to be shot, I noticed that Basabe is just about even in height with McCabe, and maybe a hair shorter.  He weighs just 225 pounds.  In the NBA, he would compare physically to a small forward or even a tall shooting guard (think Tracy McGrady or Penny Hardaway).  How can he get away with playing power forward, then?  Well, a) college players are generally shorter than pros, b) he has very, very long arms, and c) he can jump really well.  As has been noted many times before, you don't play with the top of your head, but with your hands, and Basabe's hands are attached to unusually long arms.  Basabe probably has the reach of a player three or four inches taller than him, and that allows him to rebound like a power forward and block shots like a center.  On offense, though, it seems like Basabe is still figuring out how to use that length in an optimal way.

Don't get me wrong, he had a fantastic freshman year: he led the team in eFG%, TS%, rebound rate and block rate, and he made a habit of converting improbable, awkward shots at a high rate, but, oh, those awkward shots!  I can understand why he takes them.  The usual drill for Melsahn is as follows: a) he tries to back his man down, but, being 225 pounds, doesn't get very far against most power forwards, b) he fakes a shot, but his defender holds his ground and stays in position for the block, c) he uses his length to create enough distance from his defender or the right angle to get off a shot, usually a very awkward looking half-hook.  This worked extremely well last year, and, last night's poor shooting notwithstanding, it will probably work again next year, but here's my question: if Basabe can use his length to get off a shot by generating horizontal space, why can't he use his length to get off a shot by generating vertical space?  In yesterday's game, the problem he had was that in moving horizontally to set up one of his little hooks, he put the ball right at waist level, which meant that if he spun and a help defender reached in, the ball was right there for the taking.  If he held the ball high, and then used his leaping ability to jump straight up and over his defenders, it seems (to my admittedly amateur eyes), that he could get a shot off on most anyone.  He would also be in a better position to pass to cutters and see help defense coming.  Maybe this is just an issue of Basabe still needing to develop a consistent jump shot; if he could shoot like Kevin Garnett, he could play like Kevin Garnett.  If that's the case, it may just be that Basabe has developed the perfect game to take advantage of his physical gifts, one that allows him to still work in the post despite his lack of size by leveraging his length into weird, angled shots.  Still, it's tantalizing to think of where his game could go if he took it up into the air where no one could hang with him, rather than sideways, where all the normal people without 7'0" wingspans and insane verticals can reach in and force turnovers.  Is anyone else seeing this horizontal/vertical problem in Basabe's game, or am I imagining things?

For highlights of last night's action and some proof of Melsahn's vertical abilities, checkout this highlight package from Hawkeye Report.  There are highlights from Cartwright, May, Marble, and Gatens, but make sure to stay until the 4:07 mark, when Basabe gets the ball on the break and unleashes an impressive windmill jam.