Share All sharing options for: It's Not Plagiarism If You Link To It Is Building An Ark

It's Not Plagiarism If You Link To It is BHGP's regular news roundup. Send all tips to any of the email addresses at the bottom of the page. Please do not okey-doke us like Little Jimmy.

Great shirt... or greatest shirt?  Pat Angerer is American as all get-out: 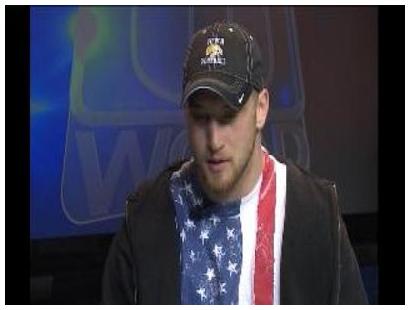 Muench knows Stanzi had a reputation at Iowa in 2010 of fading late in games. But Stanzi said he thought that might have been a product of not playing with a great supporting cast and he noted that Stanzi’s numbers improved the past two years. (emphasis added)

Wait, what?  Did Stanzi actually say that?  There are a few ways of looking at this statement.  On one hand, it's Williamson paraphrasing another guy (Muench), who was himself (allegedly) quoting Stanzi -- it's certainly possible that things got muddled somewhere along the way (particularly since Williamson isn't one of ESPN's sharpest bloggers).  On the other hand, if that's an accurate quote, Stanzi pretty much just tossed his 2010 supporting cast under the bus.  You know, the 2010 supporting cast that included one wide receiver who broke most of the school receiving records, another receiver who could break still more school receiving records this fall, a running back who was arguably Iowa's most capable pass-catcher since Albert Young (as well as a guy who came within a whisper of running for 1000 yards, despite dealing with various concussions and a lack of trusted depth at the running back position), and a sturdy offensive line that kept Stanzi from being harassed by pass-rushers (and that featured at least 3-4 future NFL draft picks).

If your standards for "great supporting cast" are, say, the 2004 USC crew, then no, the 2010 Iowa crew wasn't on that level.  But in terms of Iowa's history, they were pretty damn great, so I'm not sure I'd be throwing too much blame their way.  I still like you, Ricky, but I don't think it was the fault of DJK or McNutt that you were throwing to A-Rob in the flat when there was no time left at the end of the Wisconsin game or that you chucked an unconscionably bad interception in the Northwestern game.  Quarterback, heal thyself.

To Stoerm Or Not To Stoerm.  Walk-on wunderkind* Jordan Stoermer isn't sure if he'll be back with the Iowa cagers in 2011-2012, despite having a year of eligibility remaining.  Don't worry, Fran isn't going all Saban on Stoermer (not that he could really do anything, since Stoermer's a, uh, walk-on), it's just the damn book-learnin':

Stoermer, a civil engineering major, will be a senior this year. But classes could conflict with his basketball schedule, which might keep him from playing.

Wait, college is about going to class now?  What a concept.  In any event, Stoermer wasn't a critical part of last year's team (he averaged just six minutes a game) and he didn't figure to be a vital part of next year's squad, but more depth is always nice to have (especially since he could have filled in at the point).  Hell, even if he was just a gray team player next year, he'd still be very useful, so hopefully he can get his scheduling issues resolved.  (EDIT: However, as NorseHawk points out, Stoermer's absence could clear the way for more B-STUBBS action, which would be make the world a better place.)

Meanwhile, whether or not Stoermer returns, there's a chance Iowa could still be getting a boost of depth at the point guard position.  We mentioned this briefly on Friday, but former Iowa point guard Jeff Peterson is apparently looking to transfer (again!) and a return to Iowa is one of the options he's looking at.  He'd need to get an NCAA waiver to be eligible for next season (which is the only way the move makes any sense at all), but if he can do that, the move makes a decent amount of sense: Iowa has an open scholarship and a gaping hole behind Bryce Cartwright on the depth chart -- Peterson could be a very capable back-up without tying up a scholarship long-term.

We work blue.  As we've mentioned a time or two, Iowa's 2011-2012 non-conference basketball schedule includes a game against the Smurfs Boise State.  About that game:

The Iowa game is a one-year contract, meaning the Hawkeyes won’t come to Boise.

Why?  Because fuck Boise, that's why.

* Look at the big brain on James (Vandenberg).

* The National Football Post breaks down the pro potential of Iowa's 2012 NFL prospects in exhaustive detail.

* mgoblog compares the Ohio State scandal to the USC scandal and suggests the Buckeyes get ready for the pain that is a-comin'.

* If you didn't check out the wonderful Birds With Arms link from the FanPosts the other day... what are you waiting for?

* And if you can spare a few well-wishes for western Iowa (and anywhere along the Missouri River, really), the folks over there could use them.  That's a lot of fucking water, man.