Share All sharing options for: The PTL Lifestyle, Game 1

It's summer time in North Liberty (and elsewhere actually), which means one thing: the Prime Time League is back, along with the famed PTL lifestyle.  It mainly consists of sitting in an air-conditioned gym, watching pick-up games, and trying to divine the future of Hawkeye basketball therefrom.  Here are a few notes from the first day of the league.

I actually only caught the second half of this game, but it featured the player everyone is most interested in hearing about, Anthony Hubbard, so I'll start here. From the little I got to see, Hubbard (playing for Coaches Corner) looked pretty solid. He has a nice handle and first step, and got to the basket with relative ease. The really impressive thing was how patient he was once he got inside. He would hesitate, get his man in the air, then draw a foul and finish, or draw a double team and pass the ball off to a teammate. He got to the line quite a bit, and then unfortunately missed about half his free throws. I didn't see him take many outside shots, so I can't say too much about that aspect of his game, but he did finish with an impressive line of 26 points, 13 rebounds and 4 assists. Oh, and he completed an impressive long alley-oop that got the capacity crowd at the North Liberty Rec Center cheering. He has a rep for defense, but I didn't see much on that end.  Then again, this is the PTL.

The other notable player in this game was Ali Farokmanesh (playing for Jill Armstrong). Seeing him in person reinforced one thing very clearly: this guy is not tall. Jordan Stoermer guarded him a fair bit and looked like he had four inches on him. Farokmanesh actually had some difficulty getting his shot off because of his height (and because the defense was paying a lot of attention to him), and became more of a distributor.  He finished with 21 points on 8-18 shooting and 8 assists.

Zach McCabe also played, but not for many minutes, and looked pretty indifferent to the game, going 0-4 for no points.

This game suffered from a major talent drain, as there was no Bryce Cartwright and no Gabe Olaseni (for IC Ready Mix/Vinton) and no Matt Gatens (for Falbo's/Culver's). That was a minor disappointment compared to the deep sadness of losing the chance to root for Team Paradox (Iowa City Fitness/Culver's).  Apparently the sponsorships for the teams have been shuffled around, because Iowa City Fitness has been replaced by Falbo's Pizza.  And here I had a logo all ready for Team Paradox: 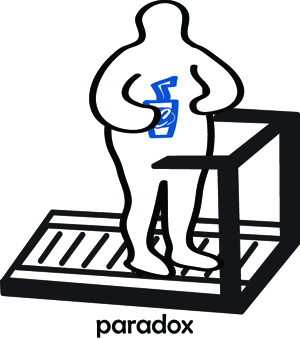 Now that it's Falbo's/Culver's, I'll have to go with this logo and team name: 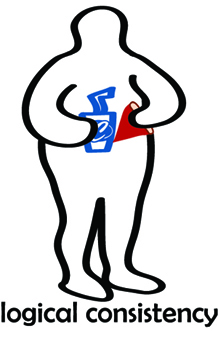 The main interest in this game, at least for me, was seeing incoming freshman Aaron White, who is on Falbo's/Culver's. It was only a half, but White didn't have a particularly good one. He is probably closer to 6'7" than 6'8", and doesn't look particularly strong (he frequently went against 6'10" European pro Dain Swetalla on the inside, and Swetalla, who, to be fair, is a true center and probably five years older, muscled him out of rebounds pretty consistently). He had some trouble getting past defenders off the dribble and had a fair number of turnovers. Again, it was just a half, and apparently he bounced back in the second half (he went 8-21 for 18 points overall), but the main thing I took away was that he is probably a small forward, not a power forward.  So if you were hoping that the presence of a 6'8" player might alleviate the logjam at small forward and shore up the dearth at power forward, probably not. He actually struck me as a similar player to Zach McCabe, that is, a tall, offense-oriented small forward who works mainly on the perimeter.

And although I was joking earlier about Swetalla going too high because his dad is the coach, his selection makes total sense. There's simply not many people 6'10" in the PTL (he finished with 14 rebounds), but beyond that, he showed some nice handles bringing the ball up the court and even made a three.  The star for IC Ready Mix/Vinton Merchants was UNI player Marc Sonnen, who went 11-15 (and 7-9 on threes!) for 27 points.

One good thing for Team Logical Consistency is that they should be getting better soon, once Matt Gatens and, unfortunately, Melsahn Basabe join the team.  Basabe did not make the cut for the US under-19 national team, which is really a shame.  It will be fun to see him play in the summer league, but it's hard not to think he would have developed more battling against the best young players in the world.

This was the premiere match-up of the afternoon, featuring the stacked Monica's/L.L. Pelling Team (which has Devyn Marble, Devon Archie, Duez Henderson, Anthony Lee, Wes Washpun and Darryl Moore) against a McCurry's/Gatens team featuring Eric May and incoming freshman Josh Oglesby.

Whoever drafted for Culver's is the Sam Presti of the PTL this year, because their team is unfairly, ridiculously loaded (although the calculated risk Culver's/Falbo's took in drafting Basabe has paid off). Marble was the star, creating off the dribble and nailing jump shots, but the team was solid throughout, especially on defense and rebounding.  Monica 's/LL Pelling threw a zone at McCurry's/Gatens for most of the game, with Archie sitting in the paint protecting the rim.  This was a) very effective and b) borderline cruel. Zone in summer league?! Come on, people, have some self-respect.  McCurry's/Gatens kept things close for much of the game, even though they were missing Andrew Brommer, thanks to some effective play by May and Oglesby. May was forced to look for his shot and create off the dribble, and did well in that respect, nailing several tough jumpers on his way to 24 points on 10-17 shooting. And Oglesby was a very pleasant surprise. He has a rep as a long-range specialist, but the biggest thing I noticed was his excellent dribbling and passing. He's 6'5"*, but I could see Fran going to him at point guard in a pinch. He made some very deft passes (including an on-point half-court alley oop to May for a dunk), and even threw some behind the back and one-handed passes off the dribble (he got a little too fancy at times -- you don't have to pass it one-handed every time, Josh). In general he looked very aware and made intelligent cuts and reads, although his shot was off (he went 3-9 for 10 points).

* May, Marble and Oglesby are all listed at 6'5", but close inspection reveals that they are not the same height. Oglseby and May look about the same, but Marble looks a good inch or two taller. I don't know of if he's growing, or if the 6'5" is just an overly-generous measurement for the other two, but something is amiss.

But Monica's/L.L. Pelling just had too many weapons. Wes Washpun showed off his quickness and got to the rim several times on his way to 12 points, Archie actually showed off a few post moves, including his dominant move of the day, "being taller than everyone", and finished with 14 points, and Moore, Lee, Henderson, and even ex-Iowa City West star Okey Ukah dominated the glass.  It was a fun game, but it wound up not being particularly close.