Share All sharing options for: It's Not Plagiarism If You Link To It Did Not Lose To Panama This Weekend

It's Not Plagiarism If You Link To It is BHGP's regular news roundup. Send all tips to any of the email addresses at the bottom of the page. Honestly, WTF, Bob Bradley. 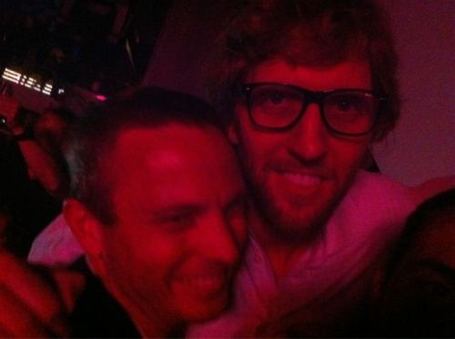 In Big Ten-related news, Dirk apparently almost went to jNW.  If by "almost went" you mean "considered it until NBA scouts actually saw him play," anyway.  But, really, it makes perfect sense given the presence of future Eurotrash treasures like Vedran Vukusic and Luka Mirkovic on their roster in the '00s.  They're totally comparable to Dirk.  If the comparison you're making is "Luka Mirkovic is the homeless man set on fire's version of Dirk Nowitzki," that is.

Don't forget your polishing towel.  Guess who's celebrating a silver anniversary this year?  If you guessed the Legend of Zelda you'd, um, be right.  But the answer we were really looking for was "the Prime Time League," everyone's favorite North Liberty-based pick-up basketball league.  The draft is tonight (Tuesday), and much like the NBA draft, the first pick is being hotly debated* by hoopheads.  Freshman phenom Melsahn Basabe would be a pretty likely choice, but his availability is in question due to his participation in the U19 USA Basketball Team try-outs next week.  Harty lists Matt Gatens and Anthony Hubbard as other potential top picks, although curiously not Bryce Cartwright, who frankly would seem to have the game to really flourish in a setting like the Prime Time League.  The PTL is also a chance to see incoming recruits like Hubbard, Josh Oglesby, Aaron White, and Gabe Olaseni before they officially suit up in November, although the pick-up stylings of the PTL don't often tell us much about how a guy will do in the Big Ten.

The finish line.  Iowa's spring sports season came to a close with the NCAA Track and Field Championships this past weekend and, unfortunately, the relative homefield advantage of having the competition at Drake didn't do Iowa much good.  Actually, that's not entirely true: many of Iowa's athletes performed very well -- unfortunately, many of their competitors performed even better.  But Eric Sowinski set a personal record in the 800m event and the men's 1600m relay team did the same, while Jeffery Herron equaled a personal record in the high jump.  In all, Iowa ended up with 14 All-Americans, with top honors going to Troy Doris, who finished 5th in the long jump, good for first-team All-America status.  A number of Iowa athletes earned second-team honors, including Erik Sowinski (800m, 1600m relay); Chris Barton, Steven Wiley, and Patrick Richards (1600m relay); Betsy Flood (5000m); Jeffery Herron (high jump); and Ethan Holmes (400m hurdles).  Which isn't a bad haul, all things considered; Iowa's breakthrough performance at the Big Ten Championships had us setting our sights a little higher, but that may not have been realistic.  The good news is that most of Iowa's best athletes are only juniors, so they should have a chance to improve upon these results next year.

The Worlds are not enough.  Another trip to Oklahoma for Iowa wrestlers, another bitter disappointment.  The scene of the crime this time was Oklahoma City, not Stillwater, and the prize was a berth in the World Championships in Turkey in September rather than a dual meet win over the 'Pokes, but it was still an all-too-familiar outcome.  Iowa's best hope for a participant at the World Championships was former star Brent Metcalf, but he came up short in the finals, losing to former Oklahoma wrestler Teyon Ware, dropping the first and third matches in a best-of-three series.  Ware upset Metcalf at the U.S. Open a few months ago and maintained his superiority over Metcalf this weekend, ending Metcalf's hopes of making a return trip to the World Championships.  Former Hawkeyes Mike Zadick, Luke Lofthouse, and Dan Dennis all finished 4th.  Ryan Morningstar finished tied for 5th.  Meanwhile, it was a more successful weekend for this guy.

* Wednesday, June 15 is the first of a handful of Iowa Days on BTN; the early programming looks a bit skippable, but there are a few gems (the Insight Bowl, the season-ending win over Purdue in basketball, the ever-wonderful Capital One Bowl) later on.

* Our Spartan friends at The Only Colors would like to emphasize that no way, no how was their 2010 squad equivalent to Iowa's 2009 squad, so don't even think about assuming their 2011 team is in line for a 2010 Iowa-style tumble.

* Like you really have something better to do than look at then and now pictures of the Saved By The Bell cast.

* Frankly, scandal or not, I'd be ashamed about saddling a kid with a name like "Tressel," but that's just me.

* The UI's first coordinator of campus and community alcohol harm reduction intiatives is named "Bender."  In related news, the line between reality and BHGP skits continues to blur.

* The (adjective) writer had a ton of really creative (nouns) and was very excited to (verb) them with the rest of the (nouns) in (geographic place), even the (color)-faced scoundrels who (adverb) (verb) him; so long, Leonard Stern, and thanks for all the Mad Libs.