Share All sharing options for: Iowa Wrestling Finally Makes It Onto Botchamania

Well, almost every award and acknowledgement.  Despite all of its successes, Iowa hadn't appeared on the internet's greatest wrestling video series.  Botchamania is a long-running Youtube series covering wrestling screw-ups, both in the ring and on the microphone.  There is no better source of footage of botched clotheslines and top rope misses.  However, as excellent as Botchamania is, it lacked any Iowa wrestling presence.

That is, until yesterday.  Because there, in the middle of Botchamania 176, was this shot: 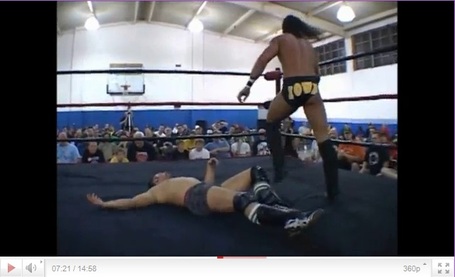 That (we think) is independent wrestler Tyler Black rocking Iowa trunks in the 2006 IWA-Mid South Ted Petty Invitational.  Black, who had just laid out his opponent in perfect position for a big move from the top rope, was headed for the turnbuckle.  He then slipped -- twice -- while trying to climb the ropes.  Becuase it's still Botchamania.

So congrats, Iowa wrestling.  You finally made the big time.