Preseason College Football Mags Out; Hope You Like Jacksonville 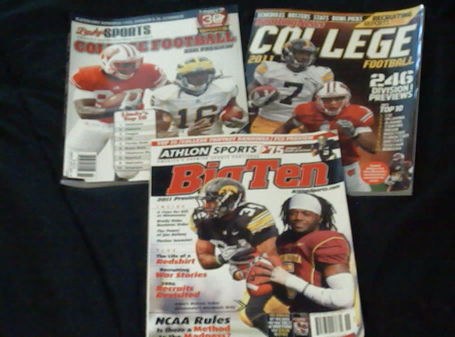 So the first wave of preseason college football magazines are hitting the proverbial newsstands (newsstands
being even more archaic than bookstores and for good reason: ever since they stopped selling pirate comics, they've been worthless).  As usual, they're likely of very limited predictive value (thanks in part to their absurdly early publication deadlines; I think these were finalized at least three Ohio State scandal cycles ago), but they do give us something to read and vent about in the otherwise empty summer months.  So... hooray?

Athlon
Cover Watch: Marcus Coker and MarQueis Gray graced the cover of my copy, but I imagine that's only true for the copies sold on Iowa and Minnesota.  Other Big Ten states likely get more region-appropriate characters (although lord knows who's on the cover in Indiana -- Danny Hope and the orthopedic surgeon of choice for the Purdue football team?).

Record/Finish: 8-4 (4-4); 3rd in the Legends division (behind Nebraska and Michigan State)

Odds and Ends:
Athlon pegs Ohio State and Nebraska to win their respective divisions, with Ohio State winning the inaugural Big Ten Championship Game.  Minnesota and Indiana ride the pine in their respective divisions.  The team summary hits the usual beats: strong offensive line, solid returning talent in McNutt and Coker, big question marks in the front seven, etc.  The "views from an opposing coach" bit wonders what effect Rhabdogate will have on the team (increased solidarity vs. splintering into divisions), but thinks Iowa could still make some noise thanks to a favorable schedule.

Sporting News
Cover Watch: Marvin McNutt and Nick Toon; slightly odd choices considering TSN goes on to note that the league seems to be trending back to being a run-oriented conference with the addition of Nebraska and Brady Hoke's takeover at Michigan.

Record/Finish: no record; 4th place in the Legends division (behind Nebraska, Northwestern, and Michigan State)

Odds and Ends:
Ferentz earns "Best Coach" honors ("Annually does more with less than anyone in the league"), while Damarlo Belcher earns the "Best Hands" nod, which: ha.  Iowa also gets hit with the "Descending" label, thanks to their dramatic roster turnover -- and, oh yeah, the scandal-filled offseason.  Broderick Binns getting pegged as All-Big Ten at DL after losing his starting gig last year is either a sign of incredible faith in his abilities or a damning indictment of the state of defensive ends in the Big Ten.

Yet again, Ohio State and Nebraska are picked to win their respective divisions, with Ohio State winning the Big Ten Championship Game and heading to the Rose Bowl.  The "stock up, stock down" feature is virtually inexplicable.  It has Penn State listed as "stock down," despite also projecting them for a 2nd place finish in the Leaders division and a better bowl (Capital One) than they saw in 2010 (Outback), while also listing Wisconsin as "stock netural," despite picking them 3rd in the Leaders division and slotting them in the Insight Bowl (quite a step down from the Rose Bowl, I think we can all agree).  And Minnesota is also listed as "stock down" even though they got rid of Tim Brewster, which is as fine an example of addition by subtraction as you're ever likely to find.

Record/Finish: n/a; 41st in the nation (7th in the Big Ten; looks like 4th in the Legends division, behind Nebraska, Michigan State, and Michigan)

*Nebraska v. Stanford is the only bowl prediction they explicitly make; the others are guesses based on Lindy's projected final conference standings.

**The actual projections have Michigan ahead of Penn State, but I'm guessing the Gator Bowl won't want Michigan two years in a row, especially if Penn State is available in that spot.  The SEC and Big 12 selections also involved a little finagling to avoid recent rematches and assumed that two SEC teams (Alabama and LSU, in this case) make it into BCS games.

Odds and Ends: Lindy's summarizes the good (promising OL and offensive backfield) and the bad (multiple defensive holes, slew of offseason scandals) and ultimately says that "If anyone can make the best of a bad situation, it's Kirk Ferentz."   One Iowa player (Riley Reiff, #9) made the Top 10 NFL Talent list.  One plus for Lindy's is that it features probably the most accurate depth chart of the three magazines, since it takes into account certain goings-on in spring practice (like Brad Rogers not practicing or Micah Hyde working at safety).

Like the other two magazines, Lindy's takes Nebraska and Ohio State to win their respective divisions, although they introduce a wrinkle by having Nebraska win the inaugural Big Ten Championship Game.

Notably absent from this summary is the best preview magazine of the lot, of course -- Phil Steele's gargantuan opus.  I'll take a look at that when it's released in a few days.