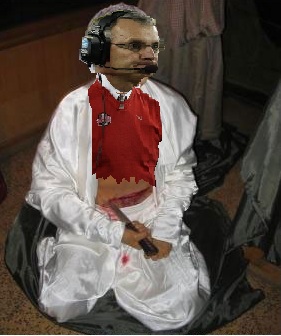 It's all over the interwebs, first broken by the Columbus Dispatch this morning: Jim Tressel's sweatervest will never again be seen on the sidelines at Ohio State.  Frankly, this seemed like the most likely outcome for months, ever since Tatgate bubbled up again with revelations about what Tressel knew -- and when he knew it.  The only question seemed to be whether or not Tressel would quit or be fired, although in the end even that wasn't really much of a question.  For the decade of dominance that Tressel brought the Buckeyes, he was probably owed a chance to leave with at least the nominal appearance that he was leaving of his own accord, rather than being unceremoniously evicted from his generalissimo chair.

Of course, as SI's Andy Staples noted, Tressel's resignation also makes sense from a pragmatic standpoint, since it allows OSU and Tressel to attempt to position the lawlessness as "a Jim Tressel problem, " rather than "an Ohio State problem," thus (hopefully) avoiding USC-style sanctions that could cripple the program.  Whether or not they'll be successful in that attempt -- stay tuned.  As far as what prompted Tressel to decide now to say his goodbyes to Buckeye-land... the hot rumor is an upcoming SI article by George Dohrmann that lobs a few more hand grenades at Tressel's already tattered image. (EDIT: And here is the article in question.)

So what does this mean for Iowa and the Big Ten?  Well, it means one of the most dominant Big Ten coaches of all-time (106-22 record, six straight Big Ten titles and seven overall) is no more.  In the short term, co-defensive coordinator Luke Fickell takes over the hot seat on an interim basis and he inherits a team dealing with a lingering cloud of scandal and the very real issue of multiple suspensions.  Fickell has never been a head coach -- at any level -- and isn't expected to do more than fully live up to the "interim" part of his new job title.  And after Fickell?  The rumors will probably fly fast and furious -- there are already plenty suggesting the usual suspects like Urban Meyer, Mark Dantonio, and Jon Gruden and we've been doing our part to rejuvenate #KOK4OSU -- but odds are nothing substantive will happen until the NCAA hands down its sanctions.

From an Iowa perspective, it means the end of the Big Ten coach who has bedeviled Ferentz more than any other (he was just 1-5 against Tressel's OSU teams, though the lone win was a glorious one, a 33-7 curbstomping in 2004).  Obviously, there's no guarantee that Ferentz and Iowa will be any more successful against a new coach -- a 14-46-3 all-time record is plenty of evidence for the notion that Iowa's Buckeye woes go far beyond the Tressel Era -- but it's hard to imagine that Iowa could be any worse against his successor than they were against the Sweatervest.  As mgoblog said, "Ding dong, the witch is dead."