Share All sharing options for: It's Not Plagiarism If You Link To It Owes Zach Five Dollars

No Wonder Gable Won So Much.  From LOLSlater, a reminder that Iowa's wrestling recruiting territory used to stretch from sea to shining sea: 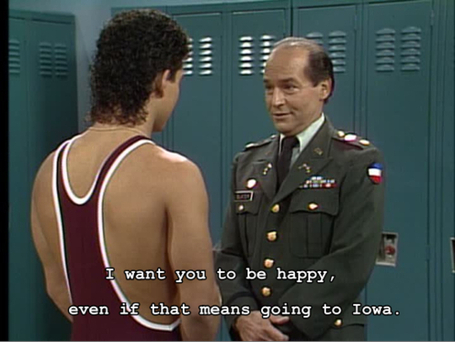 Why he decommitted to wrestle for the unheralded Cal U is still a mystery.  Probably wanted to work in a gym as small as his high school's and participate in wheelchair basketball games and the Teen Line.

Schedulin'.  Yesterday was a surprisingly big May Tuesday for football schedule news.  First, we were told that Iowa-Nebraska I, already previously set for Black Friday, will kick off at 11:00 and be shown on ABC.  Given the lack of games on the Friday following Thanksgiving -- the day's other big game is Miami-Boston College -- the network television coverage is unsurprising.  The early kick for a game that will certainly stir up some emotions (and some adult sodey pops) between the fan bases was likewise expected.

We also found out that the Homecoming game against Indiana will start at 11:00.  Television information is not known at this time (it's almost certainly BTN or ESPN2, as PSU-jNWU and MSU-Wisconsin are sexier), so the early decision on the kickoff time is likely for scheduling of related homecoming festivities.  This makes three games scheduled, as Northwestern was made a nighttime kickoff last week.

The Mad Rush.  For those who thought that the University's increasing crackdown on pregame and postgame activities would reduce demand for football tickets, you've been proven wrong: The athletic department announced that it's almost out of tickets for football, with season ticket renewal rates near 97% and requests by those holders for additional tickets is about three times the available supply.  Three-game "minipacks" have not been formally offered yet, but with MSU and Michigan already sold out, Pitt drawing decent amounts of interest, and Indiana on homecoming, it's extremely likely those packs will include two bodybag games (Tennessee Tech and Louisiana-Monroe) and Northwestern.  Single-game tickets to anything but the blowouts will be scarce, despite the common perception that this will be something of a rebuilding year for Iowa.  Whatever has been done to fans ("come to town, drop your money, and get the hell out" as one writer put it), it's not changing those fans' behavior yet.

While the Big Ten is developing a plan to improve scholarships and give student athletes the same grocery money that fellow students receive, the SEC is working to curb the rampant oversigning of programs like Alabama and Mississippi.  In both cases, these are significant nods toward student athletes by commissioners who are commonly attacked by the sniveling small-conference dopes who don't want to make sure their players have enough money to eat because their accountant told them so.

Both Big Ten schools and Iowa schools showed aademic progress in the latest APR report.  Even Iowa State basketball, which usually registered an APR that looked like a golf score, improved markedly this year, probably because their roster is all former Big Ten guys.

No sanctions will be levied against Iowa basketball related to the Ashton Kutcher luxury box thing from last season, thereby closing this sad chapter in our nation's history.

Drake University's football team, which played the first organized collegiate American football game on the continent of Africa earlier this month, is currently climbing Mt. Kilimanjaro, rising like Olympus above the Serengetti.  Good to see they're taking the time to do the things we never had.  I bless the rains down in Africa.

Huguette Clark was born in 1906 to a copper baron, was last photographed in 1928, and hadn't been to her 42-room, $100 million Central Park apartment since 1988.  Yes, the obituary of Huguette Clark is probably the best obit ever.