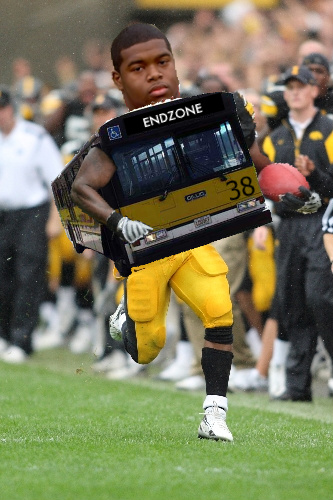 "I think we’re moving in a positive direction, but we still haven’t gotten a final analysis on it," Ferentz said. "I’ve been told the longer it goes, the more positive it is, as far as the tests they’ve done. We’re hopeful he’ll be able to return at some point during the summer months. That’s optimistically speaking."

Obviously Rogers' health comes first, but if they are able to resolve this mysterious heart ailment and the doctors sign off on Rogers playing football, it would be a significant boost to Iowa's offense to have Rogers out there.  In other injury news, Marvin McNutt and Tanner Miller are expected to be full-go by summer, but Jim Poggi has been having one miserable offseason -- in addition to being one of the rhabdo-afflicted players, he's also undergone two shoulder surgeries.

Ferentz also spoke briefly on playing Nebraska on Black Friday (outwardly he's very positive about it), the impact of agents on the college football games (interestingly, he's more concerned about them swaying underclassmen into leaving for the NFL Draft than them creating the sort of eligibility issues that torpedoed North Carolina's season last year -- and may be doing so again this year), an early football signing period (it's not coming anytime soon), and the Chicago/Indianapolis debate for the Big Ten Championship Game.

* The Second City vs. The Circle City.  Speaking of that... the race to be the host for the Big Ten Championship Game is down to Chicago and Indianapolis.  I'm sure the Big Ten will make the right decision.  (They won't.)  Hlas thinks the Big Ten should just split the difference (sort of) and have the football title game in Chicago and the basketball tournament in Indianapolis and, frankly, it's hard to disagree with him.  Playing the football title game outdoors, at Soldier Field, just feels right.  And if you need more persuading, here's Yahoo!'s Dan Wetzel:

Controlled, sterile and temperate is the most un-Big-Ten-like setting imaginable. Didn’t Minnesota prove that?

The best thing that can happen to the Big Ten championship game is it snows. Every single year. It would be the most distinctively Big Ten backdrop possible, a full-on embrace of the league’s culture. Its ambiance, if you will.

Yep.  Give us our outdoor football, dammit.

In related news, the Big Ten still hasn't finalized the tiebreakers to determine the division champions; have they considered rochambeau?  And could the Heartland Trophy be on the line in the Big Ten Championship Game if Iowa plays Wisconsin?  If Bret Broelema has his way, hell yeah it could.  We approve.

* Don't be Rud(ner).  Big Ten Senior Associate Commission Marc Rudner got asked a lot of the usual questions about media issues and scheduling... and he gave a lot of the usual answers.  Meet the new B1G, same as the old Big Ten.

Will the Big Ten add more night games in the future?

When asked if the league will change its media contracts to allow for November night games, Rudner said "No."

Personally, I still think it's just a matter of time before the Big Ten adds more night games -- but for now at least they're basically holding the line on the status quo.  How about weekday football games?

Will the league move any of its football games to midweek?

"We wouldn’t do that. Our media agreements stipulate that our games are going to be played on Saturday. We have the ability, with the Iowa-Nebraska, if they come to us and say they want to play the Friday after Thanksgiving, we can do that. Or if Wisconsin wants to move its UNLV game they could do that. We’re not going to go off of Saturday."

Monkey business with the games on opening weekend and the final week of the year?  A-OK.  Any other scheduling hanky-panky?  Not happening.