It's Not Plagiarism If You Link To It Is Feeling Hopeful

Share All sharing options for: It's Not Plagiarism If You Link To It Is Feeling Hopeful

It's Not Plagiarism If You Link To It is BHGP's regular news roundup. Send all tips to any of the email addresses at the bottom of the page. Please direct all offers for penis enlargement to HFMR. 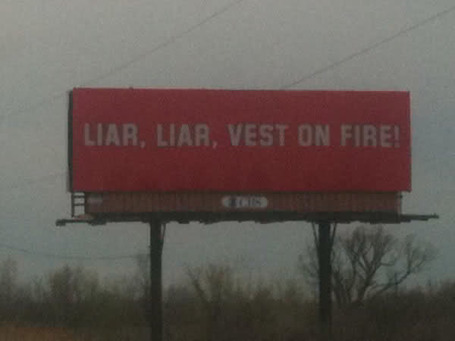 * The future cometh.  Iowa basketball held their annual team banquet yesterday and while from a strict numbers perspective there wasn't a whole lot to celebrate (a second straight season with 20 losses, another first-round exit in the Big Ten Tournament, and a finish near the bottom of the conference), the players and coaches are choosing to look on the brighter side of life:

"Around town there seems to be a lot of excitement and people are excited about the new recruits and ending the season on a somewhat better note," incoming Iowa senior Matt Gatens said. "We beat Purdue (in the season finale) and played hard against Michigan State (in the Big Ten Tournament), a game we probably should have won. It’s nice for everybody to be positive and on the same track.

"It makes it more fun when there’s excitement about the team here around the community. But nothing’s been done yet."

Hope was a commodity in short supply for the Iowa basketball program until recently -- for players, coaches, and fans, frankly -- so it's a good start; hopefully it leads to a few more actual wins next year.  As Doc goes on to note, a big part of that hoped-for improvement will come not just from the improvement of the returning players, but also from the influx of new faces, all of whom address clear needs for Iowa:

Each of Iowa’s four recruits add a skill set that likely helps on the court. Cedar Rapids Washington guard Josh Oglesby is a 6-foot-6 shooter who can play multiple guard positions. Strongsville (Ohio) forward Aaron White is 6-8 can play anything from the wing to the post. Junior-college guard Anthony Hubbard (6-5) is a slashing scorer who can make plays off the dribble. The newest signee, 6-10 Gabe Olaseni of Sunrise Christian Academy, is a shot blocker who can run the floor.

Fran also talked a bit more about Olaseni (and gave Gary Dolphin some pronunciation pointers, which will no doubt be summarily forgotten), and while a more appealing style of play and hope alone don't bring more Ws, they do apparently put more butts in seats: around 2000 more people per game showed up this year, good for the fifth biggest attendance bump in the NCAA.  Finally, Jarryd Cole won the Chris Street Award for the second-straight season, Melsahn Basabe was named Freshman of the Year, Bryce Cartwright was named Playmaker of the Year, Matt Gatens won the Defensive Player Award, Eric May won the Academic Award, and Andrew Brommer and Roy Devyn Marble won the Most Improved Award.

* Of Bats and Balls.  The Minnesota Twins spent the weekend enduring the house of horrors known as Kauffman Field, but luckily for denizens of the Twin Cities, the Iowa baseball team was in town to ensure that there was no shortage of shitty baseball to be had at Target Field.  The weekend started with a gut-wrenching loss on Friday: Jared Hippen pitched a complete game one-hitter -- but Iowa still lost, 1-0, primarily because the Hawkeye hitters got eight hits, but left nine men on base and couldn't plate one measly run.  The anguish continued Saturday, as Iowa rallied from a 3-0 deficit to force extra innings, then took a 4-3 lead in the top of the 10th before losing 5-4 in 12 innings.  The loss dropped Iowa to 1-5 in 1-run games in Big Ten play.  They did at least manage to avoid getting swept by the Gophers, notching a 7-1 win on Sunday behind strong hitting from Mike McQuillan (3/4, 2 RBI), Chett Zeiss (2/5, 2 RBI), and Tyson Blaser (2/5, HR).  The 1-2 weekend dropped Iowa to 16-25 overall, 5-10 in B1G play, still good for dead last in the league.  Whatever (on-field) momentum the baseball team generated last season has been pretty well frittered away this year, barring a stunning run in the last month of the season.

* Apparently Lincoln was a linksman.  The turnaround of the Iowa golf program under Mark Hankins has been remarkable, but it hasn't culminated with the winning of any significant trophies yet -- and that drought didn't end this weekend, as Iowa finished 3rd at the Big Ten Championships, held at the Kampen Course on the campus of OMHR.  Iowa finished with a team score of (+29), behind Illinois (+8) and just Northwestern (+27).  (Naturally jNW does well at a country club sport; would you expect anything less from our Armani-clad overlords?)  Chris Brant was the standout golfer of the tournament for Iowa, finishing even par for the tournament, good enough for a runner-up finish one stroke behind Illinois' Luke Guthrie, who carded the lowest score.  Iowa did take home one trophy from the event, though: senior Vince India won the Les Bolstad Trophy, awarded to the golfer with the lowest stroke average during the season (71.08).  India finished in the top-15 in all nine stroke-play tournaments he competed in, with 8 top-10 finishes.  Failing to win the Big Ten Championship means that Iowa didn't get an automatic berth into the NCAA Regionals, but they're still expected to land an at-large bid.

* Hawkeye Locator completed their polling to determine the greatest Hawkeye athletes of all-time, finally settling on the four faces to affix atop a mythical Hawkeye Mount Rushmore: Nile Kinnick, Chuck Long, Tim Dwight, and Dallas Clark.  I guess we really are a foootball school.

* Iowa won the men's and women's sprint medley events at the Drake Relays, which also included one of the best-named Iowa athletes: Majesty Tutson.

* Former Iowa basketball player Steve Carfino has apparently settled in Australia and turned himself into the Aussie hoops version of Gus Johnson.  We approve.  (Also great, the color commentator: "NOTHING BUT COTTON!")

* This is probably why Stanzi was always more of a Captain America guy.