Share All sharing options for: It's not plagiarism if you link to it in the year 2018

There will be Bluder

What will you be doing in 2018? Fleeing alien slavers on some sort of hover bike? Enduring the second year of the Trump/Situation presidency? Enjoying the abundant post-Rapture parking/in Heaven? At least Lisa Bluder knows her plans: coaching Iowa basketball. The veteran coach just signed a seven-year extension, according to Gary Barta. And it's hard to argue with Bluder's success: eight NCAA tournaments in the last eleven seasons, a Big Ten regular season championship in 2008, a talented team that was one Vandersloot away from making a deep run in the tourney this year, and the eleventh-ranked recruiting class in the country. If Fran McCaffery enjoyed that kind of success, grateful Iowa fans might spontaneously erect a triumphal arch in his honor. Details of the contract were released Monday: Bluder will make a base salary of $443,000 with base increases of $16,000-$18,000 a year, plus various incentives.

Speaking of basketball and Iowa and outstanding achievement in the field of excellence, rising sophomore forward Melsahn Basabe has earned an invitation to try out for the USA Basketball under-19 national team. Considering some of the other names on the invite list -- Jeremy Lamb, Tim Hardaway Jr., Keith Appling -- it's a nice honor for Basabe and an opportunity to hone his game against top-flight competition. Also on the list is Ames product, Creighton player and coach-spawn Doug McDermott. If Mel makes the team, he would compete at the U19 World Championships in Latvia this summer (June 30-July 10). As it is, he has earned a trip to the slightly less exotic locale of Colorado Springs for training camp with George Mason coach Paul Hewitt.

Less good news for Iowa basketball was the fact that Iowa State snared a recruit away from us, and he sounds kind of good: Georges Niang, a 6'7", 230 lb. forward out of Tilton (N.H.) Prep. Niang was reported sought after by Iowa, Seton Hall, Providence, Miami (FL), Alabama, Siena, and Northeastern. One potential flaw with Niang: he might be delusional. On the subject of Fred Hoiberg, he said: ""He’s the whole package, and I really believe that very quickly, Iowa State is going to be a national power." Hmm... I don't want to say you're crazy, Georges, but ... I don't know how to finish that sentence.

This really has nothing to do with Iowa, but we perk up any time the words "gold pants" are used in sentence: Ohio State's Gold Pants Club has not distributed their annual token of auriferous habiliment, due to concern that the Buckeyes' season and victory over Michigan (for which the pants are normally awarded) will have to be vacated. Said club president Jim Lachey: "If they vacate the win, it makes no sense to award the gold pants, at least in our minds... And if you hand them out and say, 'Oh yeah, we'll need to get them back if the win is vacated' - I'm pretty sure that wouldn't be a smart way to go." Here's a picture of what all the fuss is about: 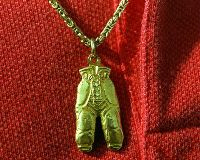 Black Heart Gold Pants, on the other hand, is still on schedule to hand out our annual award, the Gold Pantz (specifically a pair of gold extra-long Zubaz that we found at a Coralville Goodwill and believe logically must have been worn by Acie Earl at some point in the early '90s), for excellence in the field of photoshop-based demi-libel: 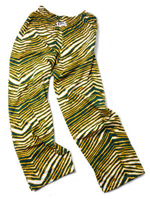