USA Today gives us a peek into the athletic department's books

Share All sharing options for: USA Today gives us a peek into the athletic department's books

This post is mainly here to point you to a new source of awesomeness on the internet, USA Today's updated College Athletics Finance Database.  The folks there have assembled an impressive collection of data pertaining to the finances of more than 200 universities through the magic of public records requests (private schools don't have to submit, and some public universities are exempt from such requests as well). The result is a nifty search tool that you can use to figure out where the money is coming from and where it's going in your favorite college program. Since our favorite program is, of course, Iowa, I figured I'd make a few charts (click on the images to enlarge them) based on the data given for Iowa in 2009-10 (records are also available for the years 2004-05 through 2008-09, and I go into that data a bit later). 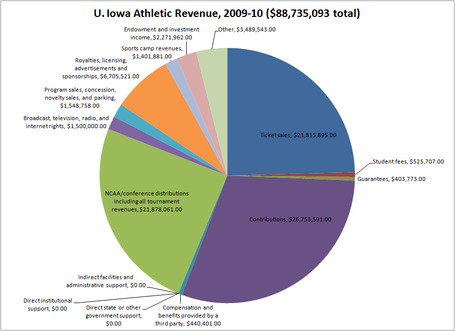 [If you are confused by what any of these terms, such as "guarantees", mean, the best explanation for the various terms I could find online was this NCAA web page.]

The big thing that jumps out at me from this chart is that the money comes from three big sources: the NCAA/Big Ten, ticket holders, and contributions (boosters). In other words, from the conference, the fans, and the fans. Note that the number on "direct or other government support" is zero. An article accompanying the USA Today report notes that Iowa is one of seven programs that meets the definition of sustainability, i.e. that it generates enough revenue on its own to cover its expenses (Georgia, Louisiana State, Michigan, Nebraska, Oklahoma and Texas are the others).

Expenses: Where the money goes (i.e. the same terms as above, but said in a mournful tone, as in "Ah! There goes my filthy, filthy lucre") 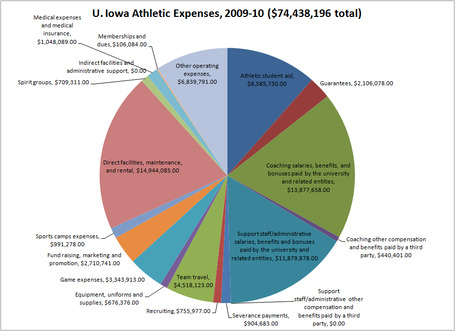 First off, the impressive thing is that the expenses are about $14 million less than revenue, meaning that the athletic program made money, at least last year.  The big ticket expenses are coaching, administration, facilities maintenance and rental, and athletic student aid.  And not to spark another "is Kirk Ferentz overpaid debate", but the salaries of the top football coaches do account for approximately $4 million of that $14 million dollar coaching tab. Note also that the football team generates most of the program's revenue: according to the Department of Education's Equity in Athletics database (which breaks down revenue and costs for schools by sport), football accounted for about 52% of the Iowa athletic program's revenue ($45.8 million out of $88.5 million) and about 25% of the program's expenses ($18.5 million out of $74.2 million).  The U of I program seems to be doing just fine financially, in large part because of the football team, so at least in those terms (the department's financial health), Ferentz's salary certainly seems to make sense.*

* What this means for you or me, however, is something else.  Most people judge whether they are happy with a school's athletic program by things like whether the teams are winning, whether the fan experience is enjoyable, and whether the ticket prices are reasonable, not by how well the athletic department is doing financially.

That gives you a picture of Iowa's finances, but what about our competition?  If you want really granular data, you can go to the site and look up each school's figures, but I thought I'd just summarize a few key numbers: 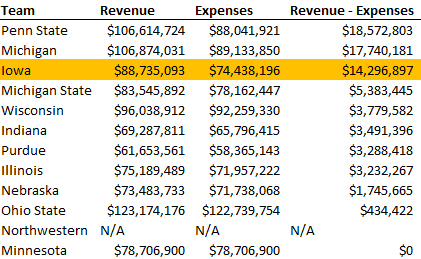 [Northwestern is not included because it is a private school and was not required to disclose their figures. I included Nebraska because they will be a Big Ten school shortly.]

As you can see, Iowa ranked third in terms of actually turning a profit* last year (I don't know what's going on with Minnesota -- it seems highly improbable that their expenses matched their revenues to the dollar). Considering that we don't have a 100,000+ seat football stadium, it's impressive Iowa is such an engine of success.  How did the program do it?  All the schools in the Big Ten make their money mainly from three sources: ticket sales, NCAA/conference distributions, and contributions.  The amount from the NCAA/Big Ten is roughly the same for all schools (about $20 million), but ticket sales and contributions vary widely:

* I'm not sure if "profit" is the best way to put it, because it's not clear what actually happens to that money at the end of the year. Is it put in an account and invested, like an endowment? That would be my guess, but I'm not sure. Anyone out there know the answer to this question? 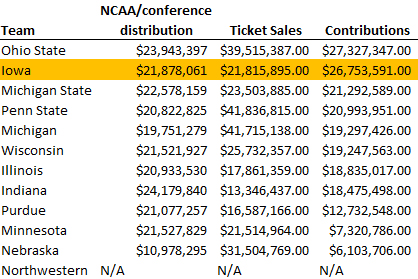 In terms of tickets, it breaks down pretty much as you'd expect: teams with big football stadiums, like Penn State, Michigan, and Ohio State, bring in around $40 million from tickets, while teams with small stadiums Indiana and Purdue are at the low end, bringing in $13 and $18 million respectively.  And if you think this is about something other than football tickets, it ain't: 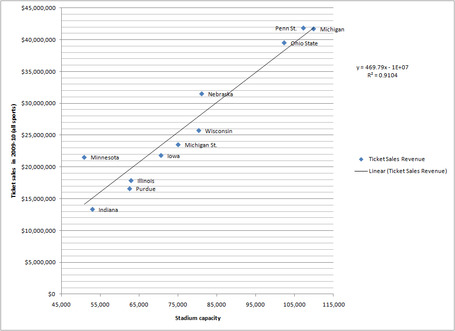 There is a very strong relationship between football stadium size and overall ticket sales, which stands to reason: football stadiums are big, and football is popular. The only big outlier is Minnesota, which is probably still benefiting from its new-stadium honeymoon period.

In terms of contributions, Iowa has gotten a pretty insane level of support from their fans over the past five years. Iowa ranked second in the Big Ten last year at $26.7 million, with only Ohio State raising more (and only a few hundred thousand dollars more at that). I think we can all agree that a) Ohio State is a bigger school than Iowa, b) Ohio is a bigger state than Iowa, and c) Ohio State is better at sports overall than Iowa, which makes the contributions all the more amazing.  And the trend is that the department is raising more money* over time: 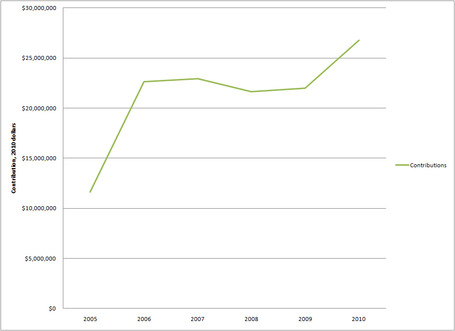 * the USA Today figures were unadjusted for inflation, so I adjusted them to 2010 dollars using the Bureau of Labor Statistics inflation calculator.  The same goes for the other "historical" (i.e. from 2004-2009) figures in the rest of this post.

The jump in contributions in 2004-05 to 2005-06 is dramatic, and the jump from 2008-09 to 2009-10 only slightly less dramatic.  The university has commenced two major facilities renovations in that span (Kinnick Stadium in 2005-06 and Carver-Hawkeye Arena in 2008), and has raised money through club seating and priority-seating gift programs for Kinnick and Carver to pay for those renovations, so we might be seeing the effects of those programs at work (the Kinnick priority-seating program started in 2006, while the Carver program will be applied for the first time next season). The USA Today data doesn't break down contributions at a finer level than that, however, so it's hard to know for sure what is behind the increase in contributions from 2005-2010.  It is interesting to juxtapose contributions and direct facilities costs over the past six years, though: 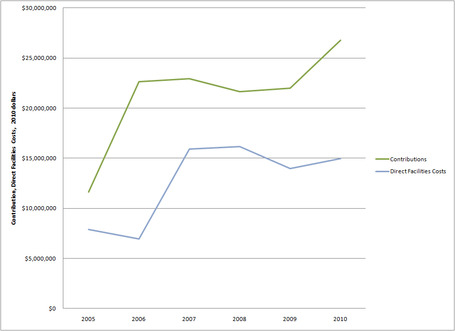 Iowa's high contribution levels reflect enthusiasm from the fans, but also a particular method for generating revenue, one that does not rely on the state or the university for direct or indirect support.  By contrast, the University of Minnesota's athletic program received about $8 million in direct and indirect institutional support in 2009-10; Wisconsin received $5.5 million. Iowa's department is self-sustaining, but that means that the money has to come from somewhere other than the university or the state, and for the most part that means the fans.

The general trend of growth in contributions is mirrored in the overall figures for revenue, expenses, coaching salaries, and administrative salaries, as this table showing the major budget items* from 2005-10 shows:

* All figures adjusted to 2010 dollars, which explains why they don't match up to the USA Today figures, if you're curious.

Most everything -- coaching salaries, administrative salaries, NCAA/Big Ten distributions, private contributions, direct facilities costs, are up -- and as a result, a budget with revenues of $69 million and expenses of $61 million in 2004-05 has expanded to $89 and $74 million in 2009-10.  The things that haven't increased are ticket sales revenue and direct institutional support (which has decreased to zero).  There could be more to the story that I'm missing, but the big drivers of the budget I see are rising facilities costs, a decline in direct institutional support, and a rise in coaching salaries* on the expense side and higher NCAA/conference distributions and contributions on the revenue side.

* Note that the coaching salary budget line does not include severance payments, such as the $800,000 payment Iowa paid Todd Lickliter in 2010; those are included on a separate line.