Share All sharing options for: It's Not Plagiarism If You Link To It Is Replacing Timeouts With Tea Time

* Caring is creepy is the dog's bollocks.  Just days after landing Anthony Hubbard, Fran added to the 2011 Iowa hoopyball recruiting class by snaring Gabe Olaseni, a 6'10" center from London by way of Sunrise Christian Academy in Kansas.  Yes, that would be London as in England; bloody hell, we've got ourselves a limey.  In addition to helping fulfill the cool accent quota on the team, Olaseni fills a significant need in Iowa's roster: size.  With the graduation of Jarryd Cole, Iowa's big men contingent was down to Andrew Brommer and Devon Archie, which was a bit... concerning.  Olaseni isn't exactly a plug-and-play big man (let's be honest: if he was, he probably would have been snapped up by someone else months ago) and in fact he might be a bit of a (whispers) project.  Sayeth Fran:

"He is a talented athlete, who’s 6-foot-10 with a 7-foot-2 wing span.  He has great length, is able to run the floor and can block shots. Gabe’s someone who will really impact our style of play.  As good as he is, he has tremendous upside."

Even if he is a project offensively; he might be able to provide an immediate impact on the glass and on defense. Hell, if he can defend without getting a foul every 1.5 minutes, he'll already be a step up on Brommer.  Either way, he's a solid prospect to have in the fold for Iowa and if he represents the end of Iowa's recruiting efforts this year (as Fran has intimated), then he's the final part of a pretty solid class, one that addresses many needs, like outside shooting (Oglesby), inside presence (Olaseni, maybe White), and wing play (Hubbard).

The lack of a back-up point guard is still a concern; Fran seems to think Marble and Hubbard (as well as Oglesby or Gatens) can spell Cartwright at point.  He may be right that they can be adequate fill-ins for 4-8 minutes a game, but we're still going to want to pray that Cartwright avoids any serious injuries next year if Iowa's going to have any prayer of getting above .500 and contending for any sort of post-season trip.

* The story of A.C.  No, not Slater.  The other one.  I linked to this in the Adrian Clayborn draft preview yesterday, but it's entirely possible that it would get ignored in the sheer volume of links in that post and that would be a shame, because it's a really fine story about the life of Adrian Clayborn, from a childhood dealing with Erb's Palsy and the violent death of his oldest brother to now, when he stands on the precipice of being a first-round NFL draft pick.  If you've followed Iowa football for a while, chances are you've heard most of the details therein, but it's still a well-written summary -- and there will still probably be a few notes that surprise you.

For instance, did you know that he once played against former North Carolina star Tyler Hansbrough in the Missouri state hoops quarterfinals?  (It didn't go well.)  Or that he was friends with former Missouri standout (and current Philadelphia Eagles starter) Jeremy Maclin?  And that their high schools played an annual rivalry game (The Turkey Bowl Game!) for a trophy (The Frisco Bell Trophy)?  I bet not.  So go on -- read up.

Iowa wrestling coach Tom Brands, always fiery at this event, thought the crowd was "dead."
"McCaffery said he was going to do this, but I will," Brands said.

At that point, Brands ripped open his dress shirt, with buttons flying everywhere.

"It’s a big deal," Brands said after the crowd roared its approval. "This is my favorite shirt."

To the best of our knowledge, there were no photographers at the event; luckily, BHGP was able to obtain an artist's rendering of the event: 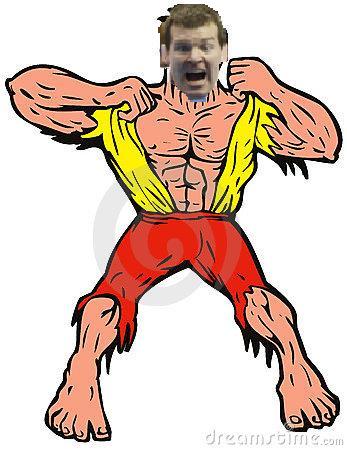 There were some other good quips from Brands, Fran, and Norm as well.  Just make with the clicky, won't you?

* Grappling odds 'n' ends.  There's also a handful of other Brands-related news bits from the past few days.  One, the NCAA Wrestling Committee is "recommending a new rule that would allow the offensive wrestler to grant an escape to his opponent and choose to start in a neutral position."  For years, we've seen Iowa guys basically do just this by briefly laying hands on guys and then letting them go -- or "cutting" them, as it's most commonly called -- so this wouldn't change much for Iowa guys -- except give them more time to secure additional takedowns.

Two, Brent Metcalf is back in action -- he and the rest of Team USA are taking on a crew of Russians in the 2011 Beat the Streets Gala in Times Square.  Metcalf's opponent at 145.5 is Magomedmurad Gadzhiev; don't even think about asking us to try and pronounce that.  Needless to say, we can't think of anyone better to take out those damn Cold War bastards.  Metcalf is joined by a who's who of recent NCAA stars as well, including Jake Herbert (jNW), Jake Varner (Iowa State), and Jordan Burroughs (Nebraska).  More info on the event available in the link.

Three, the Iowa wrestling team also added a pair of new recruits, Joey Trizzino (Bettendorf) and Jake Kadel (New London).  Neither man won state titles during their prep careers, but both were multi-time medalists in the state tournament.  Trizzino has family ties to the Iowa program -- his brother Nick walked on a few years ago and his father (Mark) and uncle (Scott) were part of the legendary teams coached by Dan Gable that won nine national titles in a row.  Trizzino projects to be at 149/157, while Kadel projects at 133; both are walking on and while the competition for a starting spot will be fierce, Iowa can always use talented guys in the practice room.

* Blog buddy Fight For Iowa speculates on the start times for next year's Iowa games and sees a lot of 11am kickoffs on BTN; frankly most of his picks seem dead-on, although I think the Iowa-Michigan State game could be an afternoon start.  He doesn't see any night games at Kinnick this fall, which is probably true unless someone decides to put Iowa-jNW or Iowa-Indiana under the lights.  The latter is Iowa's Homecoming game, which has been a primetime affair the last two years -- although the opponents were Michigan and Penn State then, too.

* DJK has been making the media rounds of late, appearing on radio and in print.  I find the topic exhausted at this point, but I understand that might be a minority opinion, so: here you go.

* Hannah Draxten might be hanging up her jersey for good for the Iowa hoopsters, but PG Theairra Taylor is recovering from her third ACL surgery (!) in three years (!!) and could be back this fall; don't let AIWBBPKLHG know.  Draxten's departure, while sad, does free up another scholarship for Bluder to use.

* Hawkeye Locator lists the top ten Iowa picks in the NFL Draft over the last 30 years; it's a pretty solid list, although (much as we love them) Kaeding and Dallas Clark might be a touch too high.

* And it's not every day that Reggie Roby is name-dropped in a rap song.

TFJ to readers GaryDolphinSafeTuna and pfac51 for pointing me to a few of these articles.