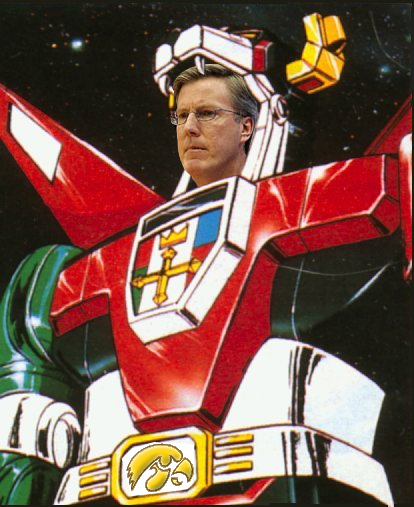 While most of the attention around recent Iowa basketball recruit Anthony Hubbard has centered on his age and checkered past, the true reason Fran McCaffery focused on the 6'5" guard-forward has gone unnoticed: Hubbard represents the fifth 6'5" player on the team, in addition to Matt Gatens (6'5"), Eric May (6'5"), Devyn Marble (77 inches), and incoming freshman Josh Oglesby (195.6 cm).  This unique combination of similarly-heighted players allows coach Fran to create Basketball Voltron.

"I just think 6'5" is the ideal height for a basketball player," said McCaffery.  "It allows a player to be agile enough to play guard, long enough to defend well on the perimeter, and tall enough to grab rebounds.  The Vetruvian man was 6'5", Lou Ferrigno was 6'5", and although Michael Jordan claimed he was 6'6", without those inflated shoes of his, he was 6'5".  It is truly the ideal height, for basketball and for life... and of course there is the myth of basketball Voltron."

Legend and '80s children's television has it that when five player with the exact height of six foot five inches take the court together, they magically coalesce into a force that is greater than the sum of their parts.  In the original Japanese cartoon, five robot lions combined to defend the planet Arus from the evil King Zarkon (of planet Doom) and his army of Robeasts.  Basketball coaches as far back as Hank Iba have interpreted these details as a metaphor for basketball, with planet Arus representing "team basketball," planet Doom representing "gigantic center basketball," and the army of Robeasts representing dominant big men such as Wilt Chamberlain, Kareem Abdul-Jabbar, Bill Walton, and Shaquille O'Neal. 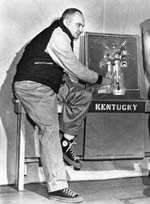 Said Coach McCaffery: "I've been watching as much of the show as I can, and  I'm still not clear whether the five players will somehow physically transform into a player 32 feet tall, or whether the combination will be more metaphorical.  I'm hoping the former, because otherwise we're going to get killed inside."

As a back-up plan, McCaffery is also working on signing four more 6'9" players to join with Andrew Brommer and Devon Archie to form Devastator.