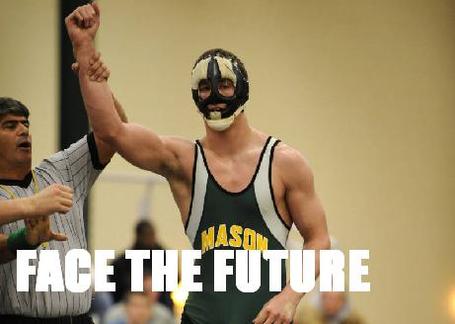 Our look-ahead to Iowa wrestling in 2011-2012 continues with a look at two upper weights, 197 and HWT.  For background material on this series and a key for the tables below, click here.  Without further ado...

A top four finish at the Big Ten Tournament seems reasonable, coupled with an NCAA Tournament spot and a realistic outside shot at being a low All-American. (via)

The Verdict: Much like he did all season, Lofthouse exceeded expectations (including mine), taking home runner-up honors at Big Tens and finishing a very solid 5th at NCAAs.  Beloved Uncle Luke's performance this season was the perfect encapsulation of the 2010-2011 Iowa wrestling team, for good and bad.  On the plus side, his improvement was remarkable -- he went from being a career .500 wrestler and bit player who couldn't beat quality opponents to Big Ten runner-up and 5th place at the NCAA Tournament (and All-America status).  That's a fantastic story and there's no question that Lofthouse deserves all the credit in the world for sticking with the team, buying into Brands' teachings fully, and gradually becoming a very good wrestler.  It was wonderful to see him finally start beating other ranked wrestlers during the Big Ten dual season and pouring it on against lesser opponents.  The fact that he was able to earn All-America status (something Iowa's last hard-luck case at 197, Chad Beatty, was unable to do) was truly wonderful.

On the negative side, the Albino Rhino was a classic overachiever and there was a clear ceiling on his abilities.  He was one of the hardest-working wrestlers in the nation, but he was not one of the most talented wrestlers.  We saw what happened when he faced Trevor Brandvold or eventual national champion Dustin Kilgore -- he came up short. I don't think he would have had much better luck against the other top guys at 197 (like Cam Simaz or Clayton Foster), frankly.  The truth is you really do need elite talent to make it to the top.  Penn State won the Big Ten Tournament because they crowned five individual champions and they won the NCAA Tournament because they had five guys finish third or better.  Iowa had slightly more overall depth, but they didn't have quite enough excellence.  You need guys like Lofthouse -- guys who overachieve and give every last drop of themselves to the program -- but you don't necessarily want them being one of your three best wrestlers (as Lofthouse arguably was this year), at least not at a time when rival teams (like Cornell and Penn State) do have more guys with elite-level talent.  To regain the title, Iowa needs more guys who are legitimate threats to be in the top-four at the NCAA Tournament; Uncle Luke was never quite a threat to do that unless the bracket broke well for him.  Again, I don't want to discredit Lofthouse or disparage his efforts -- he was a rock this season (his win over Sonny Yohn in the Minnesota dual was absolutely immense and as big a reason as any why Iowa's dual meet unbeaten streak remains alive) and you can't say anything bad about his heart or the strides he made.  Nor is it his "fault" that he was one of the 3-4 best wrestlers on the team -- it's the sort of thing that can happen when you're breaking in so many new starters and sending out so many freshmen or sophomores with scant experience.
FINAL GRADE: B+

Speaking of guys with higher ceilings... enter Cayle Byers.  While looking ahead to next year earlier this season, 197 was the spot that kept popping up to produce anxiety.  Iowa had (and has) intriguing options at every other weight, but at 197 they had Uncle Luke and... no one.  Seriously.  No other Iowa wrestler competed in a single match all year at 197.  The official roster lists Brodie Ambrose as the only other guy at 197.  Nor did Iowa have a freshman at 197 who was redshirting this season with the expectation of taking over for Uncle Luke in 2011-2012.  197 was looking like a potential black hole in the roster even worse than what we saw at 149 this year.  Then the coaches went out and signed Cayle Byers, a two-time NCAA Tournament qualifier from George Mason who ran afoul of the law and found himself on the outs there.  Byers had accumulated a 17-1 record in '10-'11 and was ranked in the top-five, nationally, before said incident put an end to his season.  His lone loss was a 5-4 decision to Simaz and he notched a 9-4 win over Kilgore, the eventual national champion.  The talent is certainly there -- and he hasn't even gotten into the Iowa practice room yet.

It's probably best to keep the Byers excitement in check until we see how he wrestles in black-and-gold nine months from now, but on paper he gives the Hawks their best shot at a title at 197 in a long, long time.  It certainly won't hurt that this weight clears out a bit after this year, nationally speaking -- four All-Americans from this past year are gone (including runner-up Foster, 4th-place finisher Brandvold, and 6th-place finisher Zack Giesen of Stanford).  Kilgore and Simaz will be tough foes atop the division, but Byers was already competitive with them this past year.  The Big Ten returns a pair of All-Americans (Yohn and Indiana's Powless), but overall the league isn't stacked here.  Among incoming freshmen, Penn State's Morgan McIntosh is the standout, but he's flat-out said that he expects to redshirt next year.  Byers is just a stopgap for Iowa's issues at 197 -- they still don't have anyone there to man the spot in 2013 and beyond -- but he has the potential to be one very good stopgap.

Honestly, getting an NCAA qualifier out of this weight would make us pretty happy and a win or two at the NCAA Tournament would be great; anything beyond that would be pure gravy.  But if neither of those two things happen, we still won't be terribly disappointed because we simply don't expect much out of heavyweight this year. (via)

The Verdict: It was the best of times... it was the meh-iest of times.  There was a three week span in late February/early March when it seemed like our favorite shaved bear had finally turned the corner.  That the light had finally turned on.  That his elevator was finally going to the top floor.  That the proverbial "things" had finally click for him.  That any number of other tired sportswriting metaphors had happened to him.  He won his final three matches of the season (getting bonus points in two of them, no less), then went on to win the Big Ten Tournament with three wins in two days. Sadly, those three weeks were the unquestioned highlight for Blake's season.  He went 1-2 at Midlands, went 5-3 in Big Ten duals, and finished up the season with an ugly 1-2 performance at the NCAA Tournament.  Too often he waited until seconds were left in the match to display any real attacking instincts and he was consistently incapable of using his massive size to his advantage; he was terrible at ridings opponents or using his size and strength to overpower smaller heavyweights.  He was, frankly, a mystifying (and staggeringly frustrating) riddle for almost the entire season.
FINAL GRADE: C+

Rasing was just a junior this season, so he'll be back in 2011-2012.  The big question is whether or not he'll retain his starting spot.  In the early going of the season it seemed like it would be a pretty open race and it was puzzling that Jordan Johnson didn't get more opportunities to showcase his abilities (though he didn't wrestle in any events after Midlands, so he may have been dealing with an injury).  After Blake surged at the end of the season and at the Big Ten Tournament, it looked more like he had the starting job locked up for another year -- no matter how frustrating he was to watch (and, for the most part, he was still pretty damn frustrating), he was at least getting very positive results.  But his dreary showing at the NCAA Tournament reopened all the early season questions about Rasing and there's no question he's going to have to fight to keep his starting spot next year.

Johnson also returns, but the real threat to Rasing should come from Bobby Telford, who won six titles at open invitationals and compiled a 22-4 record (with 13 pins) while redshirting this year.  Again, he didn't face the stiffest competition at those events, but he appears to have a much more aggressive, attacking style than Rasing and as we saw in the Ramos-Clark decision this year at 133, a guy who likes to attack is far more likely to win Brands' trust than a guy who isn't as aggressive.  Given his size and experience, Rasing is still probably the slight favorite to start next year -- but don't discount Telford.  The downside is that this could be a nasty weight class next year -- seven of eight All-Americans return, as well as a pair of other top-10 talents (PSU's Cameron Wade and Okie State's Alan Gelogaev) that didn't make A-A status.  This could be a tough weight for a young guy like Telford.

Finally, my early guess at the "two-deeps" for next year's line-up:

That looks like a strong line-up -- but is it strong enough to bring the national title back to Iowa City?  That line-up appears to have a lot of potential All-Americans but as we saw this year, it's not enough to just have a solid amount of All-Americans -- you need elite guys, high All-Americans, title contenders.  It doesn't seem far-fetched to think that McD and DSJ can duplicate their results and give Iowa a pair of high All-Americans.  Marion unquestionably has the talent to do better than 4th, especially with the weight class cleared out a little bit.  Byers seems to have an excellent chance to be a high All-American at 197.  That leaves us with six guys with question marks: Ramos, Carew, Moore, Evans, Gambrall, and Rasing.

Duplicating his efforts at this year's NCAA Tournament could be a tall task for Gambrall, given the loaded nature of that weight -- I'm not sure we can expect him to duplicate that again next year.  Carew, Moore, and Evans will all be fresh faces, although aside from Moore at 165, the bar for exceeding 2011's results isn't too high for them.  If Carew got any points and Evans picked up more than one win (neither of which seems like too much to ask for), they'll produce better results than Iowa got at those weights in 2010.  And Evans in particular seems like a real threat to be an All-American, if 174 is as down as it could be and if the hype around him is legit.  Can Ramos make the move from R12 to All-American next year?  I think that's a distinct possibility.  If he sticks at 133 and gets a bit bigger and stronger, that will help him in some of the tough match-ups at that weight -- not to mention the benefit of another year's experience.  And as for heavyweight... who knows?  It remains an utter crapshoot until we see Rasing get more consistent or see Telford become the Great Heavyweight Hope he want him to be.  Will all that be enough to wrest the title back from Penn State (and keep it away from the likes of Cornell, Oklahoma State, Minnesota, and Wisconsin)?  It's hard to say this far in advance -- but results like the ones outlined above would certainly make Iowa tough to beat.