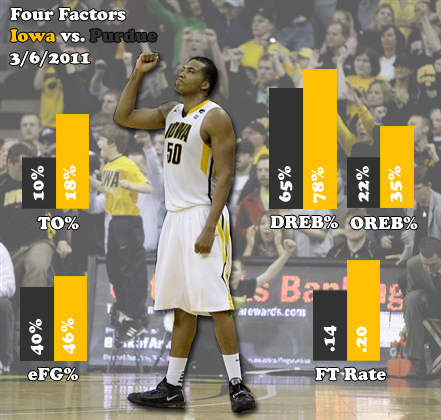 [An explanation of the four factors concept can be found here.]

I was on the road this weekend, so I unfortunately didn't get to witness this victory in person, but I did manage to find a bar in Boston that was showing the game and got to witness this Iowa team’s best victory of the season.  Everyone’s writing about Jarryd Cole’s contributions in this game, and rightfully so.  This was a very Jarryd Cole type of game: hustling, scrapping, and not too pretty.  Iowa killed Purdue on the boards, grabbing significantly more of the available defensive and offensive rebounds, and a lot of that was due to Cole, who grabbed three offensive rebounds and ten overall.  A lot of it was Melsahn Basabe, too.  Basabe grabbed five offensive rebounds and eight rebounds overall.

That was the hustling; now the ugliness.  Purdue shot an abysmal 40% eFG% (which I’d wager is their worst of the year), going 20-44 on twos and 5-25 on threes.  Iowa merely shot poorly, with an eFG% of 46%.  Both Iowa and Purdue shot a terrible percentage on their free throws (59% for them, 63% for us), too, and there were long scoreless stretches on both sides.  So why was it only a two point game?  Turnovers.  Iowa had 13, 9 of which were Purdue steals, and Purdue only had 7.  That was enough to help Purdue overcome what was otherwise an abjectly miserable day all around and make the game close.

In many ways this game resembled earlier near-upsets by Iowa, such as our home games against Wisconsin and Michigan: Iowa managed to take a lead thanks to scrappy defense and rebounding and then failed to extend the lead when they had a chance.  In particular there was a sequence at around the 14 minute mark in the second half, when Iowa had two chances to extend their lead from 6 to 8 or 9 but came up empty, that gave me a sick feeling of déjà vu.  Then the most amazing thing happened: Devon Archie came in and kicked some ass.  Andrew Brommer had just picked up his fourth foul, and Fran McCaffery sent Archie in to soak up some minutes to keep Cole rested for the stretch run.  Iowa could have easily fallen apart here, but Archie acquitted himself more than adequately: he bulled his way through D.J. Byrd for a layup, followed that up with a block, two defensive rebounds, and a steal (he also airballed a free throw, but nobody’s perfect).  By the time Cole came back in the game at the seven minute mark, the lead had dropped to three, which may not seem like a big accomplishment, but the fact that Cole could rest without Iowa losing its lead was the accomplishment.

And from there, Iowa did just enough to hang on by the skin of their teeth and hold off a furious, three-fueled, Purdue comeback: Basabe got a tip-in (6:38), then a tip-dunk (3:37); Matt Gatens drove for a layup (3:08); Cole made a jumpshot off a Cartwright assist (1:45); and, in the shot of the game, Cartwright made a blind 12-foot jumpshot that he just guessed in to extend Iowa’s lead to four with 33 seconds left.  Purdue managed to cut the lead to two with a quick Lewis Jackson layup, and given Iowa’s free throw shooting woes, it looked like Purdue might come back and tie the game, but Fran put on his wizard hat and devised a quite clever double-pass in-bounds play that sprung Gatens free for an open pass.  Gatens managed to kill several seconds before getting fouled, then coolly sank both free throws and clinched the game.  It wasn’t pretty, but it was enough.