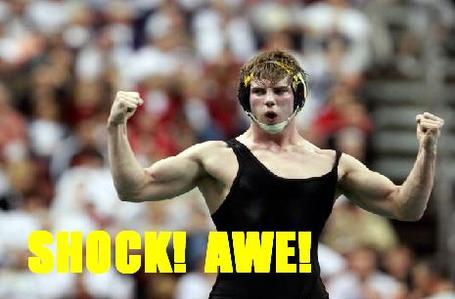 Our look-ahead to Iowa wrestling in 2011-2012 continues with a look at two upper weights, 174 and 184.  For background material on this series and a key for the tables below, click here.  Without further ado...

There's every reason to think that Lofthouse could make some noise within the league this year -- a top 3/4 finish (or even runner-up to Blanton) doesn't seem pie-in-the-sky at all.  On the other hand, he could do that, have a very good season otherwise... and still not be an All-American at the NCAA Tournament because this is just a nasty weight, nationally speaking.  We're not going to totally rule it out now, but until we see how Lofthouse performs against top-level guys this year, it's asking too much to expect him to be an All-American at this point.  There's just too much other more proven quality competition out there. (via)

The Verdict: Hey, look at the big brain on Ross!  He indeed landed a top-3 finish in the Big Ten, but failed to become an All-American (although while it was a nasty weight, nationally, the other national elites weren't what tripped up Lofthouse at the NCAA Tournament).  Like so many guys on the Iowa squad, the younger Lofthouse had a frustratingly inconsistent season.  His first six wins were all of the bonus point variety, but he also mixed in a pair of losses early on.  There was no shame in losing to ISU's Jon Reader (the eventual national champion), but the loss to Sparty's Curran Jacobs was a sign of things to come for Ethen.  He lost to Purdue's Luke Manuel at the dual, then turned around and beat him twice at Big Tens two weeks later.  He did the same against Minnesota's Scott Glasser.  It was nice that he was able to pick up those wins at the Big Ten Tournament, but had he won those matches earlier in the season, he could have given himself a better seeding (both at the Big Ten Tournament and, likely, at the NCAA Tournament as well), which could have enabled him to make deeper runs into the championship bracket.

Still, after the Big Ten Tournament it seemed like Ethen had things going in the right direction: he'd avenged many of his earlier Big Ten losses, taken eventual Big Ten Champion Ed Ruth to the wire in their semifinal match, and clawed his way to a 3rd-place finish, his second finish above his seed at a tournament (he did the same at Midlands).  Despite a brutal draw, he seemed to have the form to make a little noise at the NCAA Tournament.  Then he went 1-2, finishing with a dispiriting loss to unheralded Hunter Meys (Boston) in the consolation bracket.  After his strong showing at the Big Ten Tournament, it seemed like the starting spot in 2011-2012 was his to lose.  After his ugly finish at the NCAA Tournament, though, the door seems to be open a crack for someone else.
FINAL GRADE: B-

And speaking of that "someone else"... 174 is interesting because in addition Lofthouse (just a redshirt freshman this past year) it includes the most heralded recruit of Iowa's 2010 class, Mike Evans, who was a top-five recruit nationally.  Evans went 22-2 in open competitions this past year, accruing 12 pins (and four other bonus point wins) and taking home five titles.  His only two losses came at Midlands, a pin in 4:36 to Austin Meys (Lehigh) and a 5-3 loss to Lofthouse.  Again, the competition at those events isn't always stellar, so results should be taken with a grain of salt, but there's been enough positive chatter about Evans all season that he's going to be a serious threat to make the line-up in 2011-2012.  The buzz around him is a little reminiscent of St. John a year ago; if Evans is able to duplicate DSJ's results from this past season (2nd place at the Big Ten Tournament, 4th place at the NCAA Tournament), then we'd be doing pretty damn well.

Fortunately, 174 is a weight that looks to be a bit more wide open than most going into next year.  Only three All-Americans return: Nick Amuchastegui (Stanford), Ed Ruth (Penn State), and Ben Bennett (Central Michigan), though they're joined by a pair of top-10 guys who didn't reach A-A status, Nick Heflin (Ohio State) and Mike Benefiel (Oklahoma State), as well as an All-American from 2010 who sat out most of this season with an injury, Jordan Blanton (Illinois).  Whether Evans gets the nod and lives up to the hype or Lofthouse ups his game and holds onto his spot, 174 definitely looks like a weight where Iowa can make up some serious ground next year (which could be big in the national title race, considering Ethen contributed hardly any points to Iowa's total this year).

That said, we still need to see how Gambrall performs against high-level competition before we can get too excited about him making a run.  A top three finish in the Big Ten seems very possible, with a realistic shot at being an low All-American at the NCAA Tournament. (via)

The Verdict: This prediction wasn't so hot, although I'm certainly happy to be wrong about the "low All-American" part.  If you were to chart out Grant Gambrall's season on a graph there would be some ridiculous highs and some stunning lows.  He began the season with seven straight wins and ascended as high as 4th in the national rankings.  He started well at Midlands (three straight wins), then crashed and burned (three straight losses).  He rebounded to win seven of his next eight matches and took a 7-0 record in Big Ten duals into his final match with Kevin Steinhaus (Minnesota).  He gave up a late lead in that match and lost, then followed that up with a so-so 2-2 performance at the Big Ten Tournament.  Heading into the NCAA Tournament Gambrall was a 12-seed, the lowest seed of Iowa's nine seeded wrestlers and his consistent inconsistency made it impossible to know what to expect out of him.  Frankly, I thought there was a decent chance he would go 0-2 and be toast.  So, naturally, he proceeded to go 6-1 at NCAAs and finish in 3rd place.  Just what everyone expected, right?  Maybe those rankings early in the season knew something when they had him ranked 4th.

So how to assess Gambrall's season?  The highs were stellar (his tremendous showing at NCAAs was exactly the sort of thing Iowa needed out of someone to have a shot at the national title; it's not his fault he didn't get quite enough help from others), but the lows were intensely frustrating.  And even when he was winning it was often far from pretty -- there were way too many matches where Gambrall was simply clinging to a lead late in the third period and trying to run out the clock.  Still, I can't hate too much on a guy who had an NCAA Tournament like Gambrall did; he beat the 3, 4, and 5-seeds at that event and looked as good as he had all season.
FINAL GRADE: B

For the sake of the team, we'd all better hope that the Gambrall we saw at the NCAA Tournament is more like the Gambrall we'll see going forward in 2011-2012.  We'd also better hope he's an intensely self-motivated guy because unlike most weights on the Iowa team, there really isn't anyone to push him for his spot at 184.  The only other 184ers on the roster are Jeremy Fahler (14-12 while splitting time at '74 and '84), Thomas Lira (13-7), and Vinnie Wagner (17-3 with three titles at open invitationals) and they don't figure to be serious  threats (Wagner has some very nice results, but there's not much buzz about him, particularly compared to guys like Moore or Kelly or Evans).  Ethen Lofthouse is probably a little too small to bulk up from 174 to 184.  It's unclear if Evans could move up to 184 if he doesn't earn the spot at 174.  In all likelihood, this is Gambrall's spot in 2011-2012.

We're going to have to hope that he starts living up to his potential a bit more, though, because 184 looks like an absolute beartrap of a weight next year.  All eight All-Americans are slated to return, including three from the Big Ten alone: champion Quentin Wright (Penn State), 7th-place Travis Rutt (Wisconsin), and 8th-place Kevin Steinhaus (Minnesota).  There's also a trio of top-10 guys -- Ryan Loder (UNI), Chris Perry (Oklahoma State), and Josh Ihnen (Nebraska) -- who didn't make A-A status this past year but who will be serious threats to do so next year.  Add in Northwestern's Lee Munster, a celebrated recruit coming off a redshirt year, and you have the makings of an absolutely brutal weight next year.  Some of these guys will likely move to other weights, but it's still going to be nasty, both nationally and in the Big Ten.  We're really going to need "good Grant" to show up a lot next year.