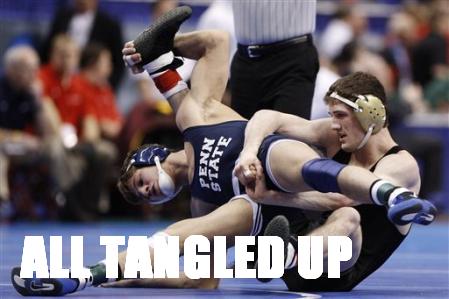 Our look-ahead to Iowa wrestling in 2011-2012 continues with a look at two middle weights, 157 and 165.  For background material on this series and a key for the tables below, click here.  Without further ado...

Iowa's developed a pretty strong tradition (both recently and stretching back to the Gable days) of turning talented youngsters into medal-winners by year's end and DSJ seems like as good a bet as any to follow that path this year.  An All-America finish (top-eight) at the NCAA Tournament and a top-3 finish at the Big Ten Tournament seem within reach for DSJ this year -- and we won't be totally gobsmacked if achieves more than that, too. (via)

The Verdict: Now that preview was pretty much on the money.  St. John entered the 2010-2011 season with as much (or more) hype than any of Iowa's other eight new starters (nine at the time) and if his season didn't quite reach the heights of other first-year phenoms like Brent Metcalf or Matt McDonough, it certainly wasn't bad.  He started well with seven wins, although there were some closer-than-expected calls mixed in there.  Those close calls really caught up to him at Midlands, where he went 1-2 and looked terrible.  There were persistent rumors that something was wrong with him around that time -- that he was sick, that he was dealing with an injury, that he was struggling with the weight cut to make 157 -- but nothing was ever explicitly confirmed.  Whatever the case, he was not wrestling well at all.  Fortunately, Midlands was the nadir of his season and things got much better after that: he went 16-4 the rest of the way, with his only losses coming against national runner-up David Taylor (3x) and third-place finisher Steve Fittery (American).  There's no shame in losing to those guys although two of thoses losses were pretty ugly (major decisions).

But he upped his game against everyone else and soon was not only winning but winning big -- he got bonus points in two of his final four wins prior to the Big Ten Tournament and two of his three wins in that event were of the bonus point variety.  St. John wasn't always easy to watch -- his body language is sometimes dreadful and his style is more akin to Jay Borschel or Ryan Morningstar than it is Brent Metcalf or Matt McDonough, but he is very, very good.  He displayed excellent defense, a fantastic ability to come out on top in scrambles, and some very slick takedowns.  He struggled against elite opponents (Fittery flat-out overpowered him and Taylor was frequently a little too quick for him), but his improvement over the course of the rest of the season is enough to make me think he could be a potential star at Iowa.
FINAL GRADE: B+

The fate of this weight and 165 are deeply intertwined.  In addition to St. John, who could decide to go at either weight next year, depending on his ability to maintain weight and improve his skills at 157, Iowa has a pair of redshirt freshmen who split time between 157 and 165 and turned a few heads.  Nick Moore (brother of Nate Moore and another wrestler from the Iowa City West prep pipeline) went 19-4 overall while wrestling unattached this year, winning a pair of titles at open invitationals.  He went 8-2 at 157 and 11-2 at 165.  Michael Kelly was a less-celebrated recruit from up the road in Cedar Falls but he produced some impressive results while redshirting: 25-4 overall with four titles.  He went 18-1 at 157 and 7-3 at 165.  He and Moore wrestled three times, once at 157 (Kelly won 6-4) and twice at 165 (Moore won 7-2 and 3-1).  Interestingly, early on Moore and Kelly both wrestled at 157, but later in the season both guys had moved to 165.  It's worth wondering if early on the expectation among the coaches was that DSJ would be one-and-done at 157, but that his success later in the year (as well as an ability to get the weight cut under control, perhaps) made the coaches instead look to Moore and Kelly as more likely fits at 165 in 2011-2012.  Based on the results (which, again, should always be taken with a grain of salt because they often come against fairly low-level opposition), Kelly seems more suited to 157 and Moore to 165.

If St. John can handle the weight cut and continue to build off his strong performances at the end of the season, though, he could establish himself as one of the top guys in the nation at 157.  Only four All-Americans (including DSJ) return at this weight, along with a pair of  top-ten wrestlers who failed to make All-America status, fifth-ranked Jesse Dong (Va Tech) and ninth-ranked James Fleming (Clarion).  One of those returning wrestlers is the national runner-up, David Taylor, and DSJ's difficulties against him are well-documented (though he was able to narrow the gap between them in each match they had this past year).  If Taylor moves up to 165 next year (which is the hot rumor), then St. John wouldn't have to deal with figuring out how to turn some of those close losses into actual wins.  157 is also a weight where newcomers could shake things up (much as they did in 2010-2011 -- Taylor and St. John were redshirt freshmen and both finished in the top four at NCAAs), since a host of stud recruits are expected to debut next year, including Marshall Peppelman (Cornell), Jackson Morse (Illinois), Jake Dietchler (Minnesota), and Dylan Alton (Penn State).  Also, Wisconsin is adding the top recruit in the nation (Destin McCauley) and he's expected to compete at 157, though he'll likely delay his start in Badgerland to train for a year at the Olympic Training Center in Colorado.

Given the shallow state of this weight in the Big Ten, a top 3-4 finish doesn't seem too hard to fathom.  Attaining All-American status at the NCAA Tournament seems like a much taller task, though -- at least until we see him wrestle a little bit this year and see if he's made any sort of massive improvement.  For now, we'll settle for a few wins at the NCAA Tournament. (via)

The Verdict: Another preview I managed to nail pretty well: Janssen indeed finished 3rd at Big Tens and strung together three wins at NCAAs, coming just short of being an All-American.  Going into this season, the fear was that this weight would be an ugly reprise of 157 from a year ago, when Iowa alternated between Aaron Janssen and Jake Kerr and neither guy found a rhythm or turned in impressive results.  Kerr got the nod early on at 165 this year, but a series of underwhelming matches from him (coupled with some solid showings from Janssen) enabled Janssen to get a crack at the starting job after Midlands.  He never relinquished that starting job.  The results weren't always perfect (he lost two of his first three matches after becoming the starter, in fact), but they came around and attitude won the day.  Janssen was far more willing to push the pace and be more aggressive with his attacks than was Kerr.  Janssen wrestled above his seed at Midlands (where he finished 5th) and the Big Ten Tournament (where he finished 3rd) and was just shy of doing the same at the NCAA Tournament (he bowed out in the Round of 12; a win there would have locked him into no worse than an 8th place finish).  It was far from a spectacular year for Iowa at 165, but Janssen brought some much-needed stability to the spot and mostly produced perfectly fine results.  There's not really anything wrong with that.
FINAL GRADE: B-

Looking ahead to next year is when things get interesting, though.  Janssen and Kerr are both gone, but the cupboard is far from empty at this weight.  A lot of the faces at this weight are the same faces we saw at 157 in DSJ, Nick Moore, and Michael Kelly.  All three guys are potential options at 165 next year, too.  In fact, the decision here could come down to which weight DSJ decides to go at next year.  If he decides he can keep the weight under control down at 157 and still be very effective, he probably stays there and Kelly and Moore fight it out at 165.  If DSJ decides he'd rather move up to 165 and add a bit more muscle he becomes the favorite at this weight (although he'd still likely have to prove himself better than than Kelly and Moore) while Moore and Kelly duke it out at 157.

The big question is whether whoever ultimately fills Janssen's shoes can better his results from 2010-2011 (a 3rd place finish at Big Tens and a R12 finish at NCAAs).  Frankly, it won't be easy, even if whoever is ultimately chosen here is more talented than Jassen (which seems likely).  National champion (and Hodge Trophy-winner) Jordan Burroughs is gone, as is persistent pest Colt Sponseller of Ohio State (a 4th-place finisher at the 2011 NCAA Tournament), but every other All-American is slated to returrn, including runner-up Tyler Caldwell of Oklahoma and 3rd-place finisher Andrew Howe of Wisconsin (who's still never been beaten by a Big Ten foe), although Howe is a definite possibility to take an Olympic redshirt next season.  There's also three other top-10 wrestlers returning who failed to make All-America status in Dallas Bailey (Okie State), Scott Winston (Rutgers), and Zach Toal (Missouri), as well as a stud freshman coming off redshirt in Nick Sulzer (Virginia).  Suffice to say, competition will be fierce at this weight and whoever wins the job for Iowa better be ready to hit the ground running.