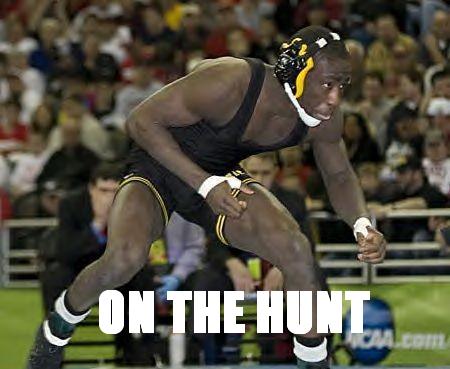 Our look-ahead to Iowa wrestling in 2011-2012 continues with a look at two more lower weights, 141 and 149.  For background material on this series and a key for the tables below, click here.  Without further ado...

Between the fact that this is a fairly loaded weight in terms of returning contenders (both at the national and Big Ten levels) and the fact that Ballweg is such an unknown, it's hard to have a ton of faith in this weight having success this year.  Not to mention the fact that this weight feels slightly cursed; Marion was able to bust out and have an excellent season a year ago, but prior to that it's been the source of underachieveing results for a few years.  All of which is to say that if we see better than a top-five finish in the Big Ten and an NCAA Tournament qualifier out of this weight, then we're doing better than expected here.  Fingers crossed. (via)

The Verdict: This preview was written under the assumption that Mark Ballweg was going to be the guy here all season; had we known Marion was going to return, we would have aimed our sights a little higher.  Since Marion did return and left Ballweg displaced from 141 after January, we'll never know how well Mark would have done at the Big Ten or NCAA Tournaments and if he would have lived up to the fairly modest expectations we had here.  From what we saw in December and January, though, he was a very pleasant surprise -- he picked up a few nice wins (ISU's Chris Drouin, Oklahoma State's Josh Kindig) and showed a surprising knack for rolling up pins (he had seven as a starter at 141).  It's unclear how successful he would have been against the big three at this weight in the Big Ten (Russell, Thorn, Kennedy); Marion went just 2-5 against them.  As for Marion, it basically boils down to what I said in the NCAAs recap last week: he clearly has the talent to win at this weight -- he just needs to improve his mental game.  Outside of his loss to Kennedy at the Big Tens, all of his losses came at the end of the third period or in overtime.  He needs to sharpen up his performance there.
GRADE: B (for both guys)

As loaded as this weight was in 2010-2011, it looks a bit more manageable next year.  Just three All-Americans return, although one of them is Russell, the defending national champion.  There are also some good wrestlers returning who didn't attain All-America status, like Penn State's Alton, Pitt's Nauman, and Air Force's Von Ohlen.  There are a few intriguing names among the newcomers, like Ohio State's Palmer (the younger brother of Lance, King of the Oompa-Loompas and Brent Metcalf's most persistent nemesis).  Josh Dziewa is a name to file away for future reference: he was a highly touted member of Iowa's 2010 class and has a ton of potential, but between Marion's return and the shoulder injury that kept him out of action for most of 2010-2011, we probably won't see much of him until 2012.  If Alton redshirts (as expected), the Big Ten race may mostly boil down to Russell and Marion.  Iowa has high potential at this weight in 2011-2012, but far they go will be determined by Marion's improvement.

Nationally, this weight is loaded with talented and experienced wrestlers -- and there are some pretty formidable guys on the Big Ten level as well.  Carew should do well, but the buzz on him isn't Metcalf-level crazy, so we'll call for him to be a national qualifier and be in the top four of the Big Ten.  If he can make All-American status, it'll be gravy. (via)

The Verdict: And now we reach the black hole of Iowa's line-up.  That preview was written in the expectation that Carew would wrestle all year; sadly, he was mistaken for a running back (or Robbie Hummel) shortly after the season started and wound up needing surgery on both ACLs before the season was even really underway.  Iowa rolled out a string of replacements, but they were never able to find someone who could be all that competitive against good competition.  Chiri and both of the fabulous Ballweg Brothers that platooned here all struggled.

Which is a shame because this was a shallow weight in the Big Ten (though not so much nationally).  If Iowa had been able to roll out a halfway decent option here, a top-four finish at Big Tens wouldn't have been at all out of the question (which would have been enough to wrest the Big Ten title away from Penn State, too).  A run at All-American status might have been a bit too fanciful, since this was a pretty solid weight nationally -- as evidenced by the fact that only two Big Ten wrestlers made All-America status (and Nadhir had to wrestle out of his frizzy-haired gourd to do that).  It's hard to give this weight a grade, since the main option was out of the picture almost immediately.  The replacements did the best they could but, frankly, they shouldn't have been out there.  Then again, bad is bad.
GRADE: D

149 should be tougher next year.  It was already a difficult weight nationally and six of the eight All-Americans from this past year should be returning, headlined by Cornell's Kyle Dake, now a two-time national champion (he won at 141 last year).  There's some speculation that Dake could move up another weight (to 157), but if not he'll definitely be the man to beat at 149.  His NCAA finals match against Molinaro was incredibly impressive.  On the Big Ten scene, things shouldn't be quite as down as they were this last year.  The Big Ten returns only one All-American (Molinaro), but there's some promising young talent ready to emerge: Michigan's Eric Grajales was a former big-time recruit who made a name for himself by finishing second at Big Tens after a rocky start to the season and Minnesota's Dylan Ness (little brother of recent Gopher wrestler Jayson Ness) is a serious talent.

As far as Iowa goes, while it's unclear who will step up at 149 next year, it's hard to envision the results being any worse than they were this year.  Iowa won barely any matches at 149 in Big Ten duals, went 0-2 at Big Tens, and failed to qualify anyone for the NCAA Tournament.  Literally any points would be a step up from that mess.  There's no shortage of options at this weight, either.  The two favorites are probably Carew (if he's fully healed from his ACL surgeries) and Mark Ballweg (if he can bulk up a bit) and either guy would be promising.  Carew had very good prep credentials and wrestled well during his redshirt year, while Ballweg did well at 141 this year and was close to picking up a few wins at 149 as well, despite the size disadvantage.  Other names to know are Jake Ballweg (Mark's younger brother and, reportedly, the best of the Ballweg clan) and Michael Kelly (a member of last year's killer recruiting class who redshirted this year and competed at 157 and 165, but who may be able to get down to 149).  I don't know (yet) if any of these guys will be All-America candidates next March, but they should certainly be able to make Iowa much more competitive at this weight.