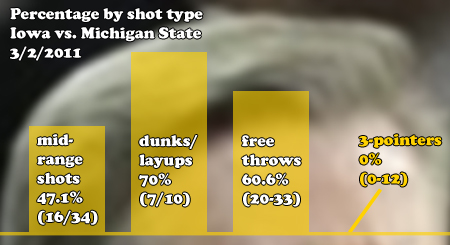 Yeechhh.  That was depressing.  Here's something to lift your spirits:

The Lonely Island - Dreamgirl (via orlylover30)

For some reason, after this game the following lyrics from that song come to mind:

Iowa decided tonight to test the well-known theory that it is impossible to win a basketball playing just defense and not offense.  The theory held.

Okay, that's a bit of an exaggeration.  It just seemed like Iowa wasn't playing offense against the Spartans.  As the percentages above show, the Hawks had nothing going from three-point range, so all of their scoring had to be mid-range shots, dunks, or  free throws.  Free-throws could have been a very productive area for Iowa, because the Spartans were fouling us like it was the end of fouling season and fouling was about to be forbidden by state edict, but alas, we made only 20 of the 33 (!) free throws we shot.  Inside shots worked well, but we only got 10 attempts at those.  That left midrange shots, and while we were okay on them  -- 47% --  that was far from good enough to match Michigan State's 60.9% eFG%.

I sometimes wonder whether this Iowa team would have done a lot better in 1985, prior to the three-point shot.  The fact that threes are worth 3/2 as much as twos, combined with the relative ease of the college three, means that threes are the most efficient shot in the NCAA game save for slam dunks.  Playing without three-point shooting as part of your game is no longer like missing a rare specialist, it's like playing without something much more important, like a point guard, or shoes.  And we just don't have that part of the game this year.  Here are our top three shooters by attempts per game:

That May percentage is actually pretty surprising.  He should be shooting more!  But May has, for whatever reason, seen his minutes and shot attempts drop across the board over the past month: 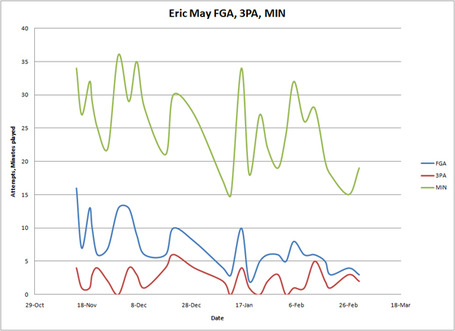 My guess is Fran's switch to Marble over May is for defensive purposes, but the numbers show that on offense, May is a surprisingly good three-point shooter, and thus a surprisingly efficient scorer.  Subjectively it seems like he's lost some confidence on his shot, but maybe this is a case where the white-hot intensity of Fran-rage has been counter-productive.  There's a really good book by Jack McCallum about the Mike D'Antoni Phoenix Suns called Seven Seconds or Less, and in it McCallum describes how D'Antoni and his staff had to recondition their players to willingly launch threes.  I can't find the quote exactly, but the coaches would tell the players something along the lines of "You guys are good!  Take the shot and don't think twice about it."  Maybe May needs that kind of reassurance.
Looking at 3-pt percentage numbers also kind of puts Matt Gatens' season in perspective for me.  He's been asked to take a lot of three-pointers.  The fact that he's at 34% given the sheer quantity of shots he's launching -- and the fact that other teams know he's our best option -- is pretty impressive.  He shot 0-5 from three tonight, but still.
But back to the game.  It's a shame we couldn't shoot better, because we actually had a decent chance in the first half.  We played tough defense to start out, Bryce Cartwright was slicing in for some nice lay-ups, Draymond Green hurt his ankle, then came back and got in foul trouble, and Jarryd Cole had actually made two long jump-shots.  Going in at the half we were down only four points, and it felt like the game was going to be close.  At a certain point, though, I think our lack of offense started to crush our defensive spirit, and things just spiraled out of control.  Here's how I imagine the internal dialogue going in one player's head:
Defensive Angel on Basabe's shoulder: Alright, we just got a steal!  Playing defense is great!
Offensive Devil on Basabe's shoulder: You know we're just going to go down and miss another three, or at best get fouled and miss our free throws, and you'll be back here in a second, working your butt off for nothing.  Give in.  Give in.  Give in.
Defensive Angel: No!  Must... RESIST!
Offensive Devil: Look, Jarryd Cole just tried to cross some guy over and  dribbled the ball off his foot.
Defensive Angel: Okay, I'm out.

Michigan State played okay I guess (especially Keith Appling, who went 7-8 from the field and 4-5 from three), and things really took off for them once our spiritual battle about caring was over, but the Spartans look like they have some serious flaws.  Fouling for no particular reason is one, lack of three point shooting (Appling excepted) is another, and poor foul shooting is a third.  We'll see if they make the NCAA tournament, but it looks like they still have a ways to go.  As do we.