MARCHIFORNICATION ROUND 1: STANZI VS. DJK

Share All sharing options for: MARCHIFORNICATION ROUND 1: STANZI VS. DJK

What Did You Do? On the field, the defending Marchifornication champ garnered some early dark horse Heisman buzz, then forgot how to throw a pass in November as Iowa collapsed against Northwestern and Minnesota (slightly redeemed in a bowl upset of Missouri). Off the field, well, he was still Ricky Stanzi, and Captain America continued to enthrall the masses -- the epic All Stanzi All the Time thread is Exhibit A -- despite his unfounded hatred of Ped Mall hippies. Explained the national phenomenon that is "Love it or leave it." Tracked down hot Russian spies with Adrian Clayborn and Ace. Continued his campaign for president.

What Did You Do? On the field, he only set every significant Iowa career receiving record (except for touchdown catches), singlehandedly attempted to keep Iowa in the Minnesota game with a kick return and the only sign of life from the entire team. Named himself "Mr. Third Down," and then went out and became it. Off the field, got in trouble for Facebooking again, then got in trouble for unspecified reasons before the aforementioned Minnesota game, then got himself in all sorts of trouble with the law. Quickly had virtually all charges dropped, even though his behavior got him booted before the Insight Bowl. Made the federal agents mad for his flagrance by hopping on Twitter and letting us all know what it's like to be DJK.

We will all remember this:

But it's Marchifornication, son, so for today it's this: 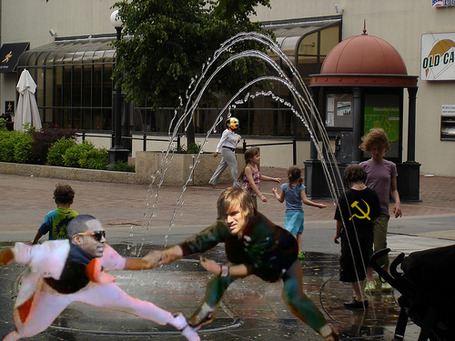