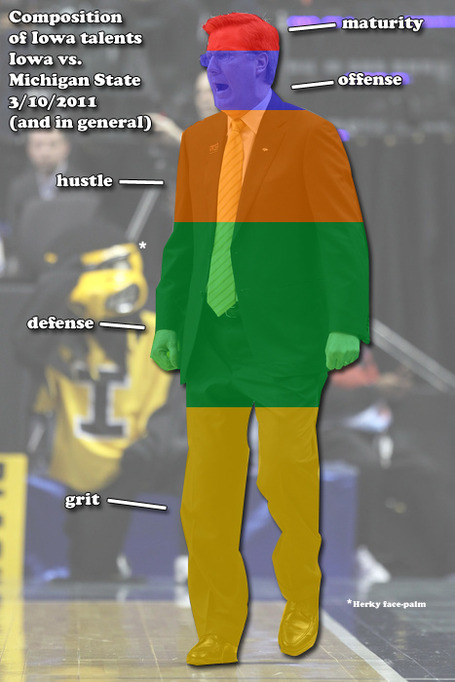 Work, a dentist's appointment and a misapprehension that the game started at 4:30 all led me to miss most of the first half of this game, so can only speak for what I saw, but ... man, that was a frustrating game to watch.  Michigan State, at least in the second half, looked ripe for the picking: they were sloppy, not focused on defense, and amazingly turnover-prone.  With the game tied 45-45 at the 13:30 mark, the Spartans committed turnovers on five straight possessions, allowing Iowa to go on an 8-0 run, punctuated by a beautiful Eric May fast break throw-down and-one over Draymond Green. At that point, it looked like the stars had aligned and Iowa was going to cruise into a quarterfinal match-up with Purdue.  Tom Izzo must have said something* to his players at the 11:40 TV timeout though, because Michigan State came out and played like a different team after that point.

*My guess is his message was pretty simple: "Get your heads out of your asses, stop making turnovers, play defense, and this team won't be able to score on you."

Iowa continued its stellar defense, but couldn't find a player who was able to counteract the tight Spartan pressure.  The eight point lead vanished in just three minutes, then became a five-point deficit.  Just when it seemed a lid had been nailed shut over our basket, Devyn Marble canned a must-have jumpshot to bring the margin back to three, and Melsahn Basabe followed that up by making a long jumper  a foot or two outside his range.  There was remarkably little scoring after that.  Durrell Summers made a three, then two and a half minutes passed until Zach McCabe matched it with a clutch three of his own.  Iowa forced a missed layup by Keith Appling with a minute left, and here's where things went cattywampus.  The Hawks had a chance to push the ball off the layup, but decided to back things out and play in the half-court.  That led to a pretty open McCabe three, which missed, followed by a huge offensive rebound by May.  The Hawks brought the ball out, then passed it into Jarryd Cole, and, well... sigh.  Cole has been a true warrior for the Hawkeyes all year, and has raised his play in nearly every area -- rebounding, defense, catching and finishing -- but the one area that gets him in trouble is when he tries to play like Magic Johnson (see his ill-fated crossover from last week).  Cole had the ball on the low block with a decent chance to just rise up and take the shot himself, but instead tried to thread a very tough bounce pass in to a cutting Matt Gatens.  The pass was off by a few inches and Michigan State stole the ball.  We were down one, and fouled.  Sub-70% shooter Summers swished both shots, Gatens missed a three to tie, and that was pretty much it.

It was a great effort by the Hawks, but they have to be kicking themselves after this game.  The team made so many unforced errors in this game: several turnovers where the ball just spontaneously popped out of the Iowa player's hand, a missed layup by Brommer, an unwise oop attempt by Bryce Cartwright into the teeth of three Michigan State defenders, silly fouls by Basabe, and, of course, that last pass by Cole.  If they could just have a few of those back, they might have won the game comfortably.  Because the defense was just tremendous.  The whole team was rotating and closing people out, Cole was making Green work for everything on the block, Marble was hounding Kailin Lucas into a 3-11, 11-point ghost of a game, and Michigan State was just gasping for air.  The Spartans shot 44.4% eFG%, which would be enough for most teams to win.

The problem with the Hawks, of course, is that we couldn't produce a decent offensive effort.  Our team this year has been kind of like Rain Man: on defense, they look fluent, adept, like they speak the language of defense; on offense, they look like they shouldn't be allowed out of the house unsupervised.  It's really kind of remarkable how stark the difference is.  Against Michigan State, the problem was that the Spartans threw something new at them late in the game -- tight, pressure defense -- and Iowa looked totally flustered.  The situation called for one person to take the ball and make them pay for their over-aggressiveness, but instead Iowa kept running its dribble weave in the half court, and it just didn't produce.  Everyone  was looking for someone else to take the ball on offense, and no one would just take control and drive to the basket.  Give the Spartans credit for upping their intensity down the stretch, but fault Iowa for not adjusting.

So... that's it.  A sad end to what's been a year of struggle, growing pains, and, ultimately, hope.  The big picture thing I take from this season is that Fran can coach a hell of a defense, and that's a rare skill.  Tom Thibodeau brought his brilliant defensive schemes to a mediocre Bulls offense, and now that team is a game and a half out of first place in the Eastern Conference.  What the Hawks need more than anything is some scoring punch, and we can just hope that will come.  If it does, it could combine with a good defense to make a very competitive team next year and beyond.