Iowa's quite simple path to the NCAA tournament

Share All sharing options for: Iowa's quite simple path to the NCAA tournament 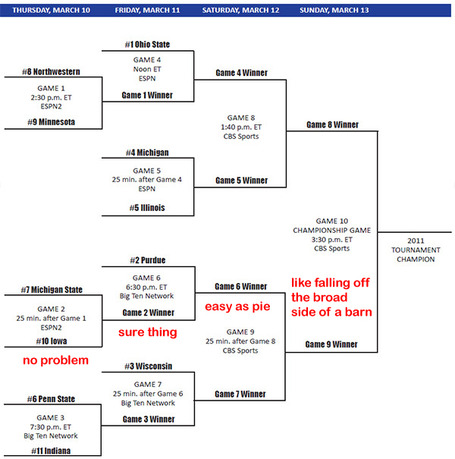 Iowa’s tournament resume is, let’s face it, none too impressive: 11-19 overall, 4-14 in the Big Ten, outscored by almost eight points a game in conference play, with two of our four wins over last-placed Indiana.  And although Iowa rates as the 10th unluckiest team in the country, even there we are second best in the conference (the ill-starred Hoosiers are 2nd in the country).  Clearly, if we are to make the NCAA tournament, we must go on a run in the Big Ten Tournament.  And the odds are against us.  Per John Gasaway of Basketball Prospectus, our chances of winning each round of the tournament are as follows:

Iowa has beaten Sparty before, and there’s no reason they can’t do it again.  The Spartans will be motivated, as a good run in the conference tournament is probably the only way they will make the big dance, but they are still a team of many flaws.  Flaw #1: Bad offense.  They are worst in the conference in two-point percentage and ninth in three-point percentage.  As long as the Hawks don’t give up easy baskets, the Spartans can be counted on to shoot themselves out of the gym.  Flaw #2: poor free throw shooting.  They are the eighth worst free throw shooting team in the conference, and feature a trio of players (Draymond Green, Durrell Summers and Delvon Roe) who all shoot under 70% from the line.  I suggest a hack-a-name-starting-with-D strategy.  Flaw #3: poor three-point defense.  The Spartans are 9th in the conference in opponent three-point percentage, suggesting they have trouble locating shooters on the perimeter.  If there’s a game where we need Matt Gatens, Zach McCabe and Eric May to get hot from the perimeter, this is it.

Game 2: Purdue
Okay, now the "easy" stuff is over.  Purdue is a step above MSU in terms of all-around talent, and is legitimately one of the best teams in the nation.  But we showed quite recently that we can beat them, and although the Boilermakers should be more prepared this time (and quite possibly looking for revenge), the Hawks did expose a few chinks in the armor last Saturday.  Flaw #1: poor two-point shooting (8th in the conference).  Iowa did a good job of contesting three-point shots, which meant that Purdue had to rely on lower-value twos for their points.  Ryne Smith (44% on threes) and E’Twaun Moore (41% on threes) are the biggest threats here. Flaw #2: Rebounding.  It doesn’t show up in the stats, but Iowa demonstrated Saturday that they can out-rebound Purdue -- and it will take another inspired effort on the boards to knock off a more determined Purdue team.  Wild card: Devon Archie.  Archie was a secret hero of the Hawk’s upset of Purdue, and showed that he has the size and strength to at least bother JaJuan Johnson.

Game 3: Wisconsin
I’m assuming this game will be against Wisconsin, because the only other options are Penn State or Indiana, and this alternative universe is already improbable enough as it is.  Wisconsin is a very difficult match-up, but they do have some flaws.  Flaw #1: So-so defense. Wisconsin is the reverse of Purdue: otherwordly offense, mediocre defense.  They’re sixth in overall defensive efficiency, tenth in forcing turnovers, and tenth in opponent three-point percentage.  Wisconsin is beatable on defense.  Their turtle-slow pace masks this fact, and a run of scores in the 50s may have convinced some of Iowa’s players that the Badgers are invincible on that end, but it’s simply not true.  If Iowa just visualizes Wisconsin in Iowa State jerseys when they are on defense (the Badgers are pretty close to the Cyclones in defensive efficiency), that may take some of the intimidation factor away.  Flaw #2: Slow pace. Wisconsin is last in the conference in pace, which should come as no surprise to anyone who has watched them.  How does this help Iowa?  As has been pointed out before, slow pace favors the underdog, because it reduces the number of chances for the superior team to prove its superiority.  It helps Iowa in another way: it reduces the chance that anyone is going to foul out.  Fran McCaffery has sometimes been over-hasty in yanking our star players (mainly Melsahn Basabe) when they get two or three fouls. That should not be a concern in this game -- in our last game with Wisconsin, only one Hawkeye had three fouls, and Basabe and May both played over twenty minutes and had no fouls. The reduced number of fouls also means Iowa will face less of a penalty for "effort" fouls -- fouls gotten when going for offensive rebounds, steals, charges, etc. Whereas against a fast team like Michigan State over-aggressiveness would mean the last ten minutes in the penalty, Iowa may not get to that situation until the last three minutes versus Wisconsin -- so foul away, Andrew Brommer! Wild card: whoever is guarding Jordan Taylor. Devyn Marble took that role last time, and did a pretty good job (Taylor went 6-18). If he can replicate that performance and if Iowa shows no fear attacking Wisconsin on defense, Iowa could win.

Game 4: Ohio State
In our alternate universe, Iowa has just knocked off three straight teams, a giant glowing rift has opened in the sky over Indianapolis, and the UN has convened the Security Council to discuss the disappearance of Los Angeles. The final finds us matched up with The Ohio State University Buckeyes. This is Mike Tyson in Punch Out, Dracula in Castlevania, or those really fast ducks in Duck Hunt. The Buckeyes are a very good, very balanced team, with veterans, talented youngsters, defense, shooting, you name it.  They’re a little toward the average side on defense, but, really, defense is for teams that aren’t winning by 20.  All is not lost for Iowa, though: cars break down all the time, people get food poisoning, and there’s always a chance it will emerge that Jim Tressel bought Jared Sullinger a Porsche last May and forgot to mention it to anyone.  Anything can happen, and I certainly wouldn’t want to face an Iowa team that suddenly found itself playing like King Shit of Fuck Mountain.  Who knows?  Andrew Brommer might open his eyelids completely for once. Eric May could get some of his Blake Griffin dunking-on-people swagger back. Iowa could win the Big Ten tournament. All these things could happen. They will happen in some universe. Let’s all collectively channel the essence of that universe and hope that it coincides with our own over the next four days.  Go Hawks!

[Most of the statistics in this article were taken from Ken Pomeroy’s excellent "scouting report" pages.  Michigan State is here, Purdue here, Wisconsin here, Ohio State here and Iowa here.]