Share All sharing options for: MARCHIFORNICATION: In The Beginning 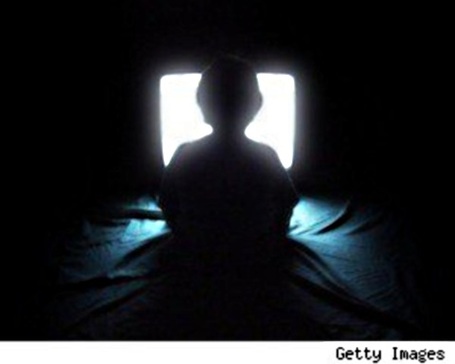 In a room with no lights, a man watches a television screen...

I had him at the end.  Had him dead to rights.

If I had just gotten one good break, I'd have ended him there.

And so I had to stand by, frozen in a fury masquerading as indifference, my rage making me yawn like a nervous child, as he wrapped himself in a flag of accolades and basked in the glory, all provided by his mindless adoring throngs.

I still have a chance, and I won't make the same mistake this time.  I've worked hard.  I'm faster.  I'm stronger.  I'm better. I've watched him on television all month.  I've seen him in action.  And I know this in my heart: I'm faster than him now, both physically and mentally.  He won't beat me on pure talent this time.  He'll need to be smarter to win, and this time he's not.

I'm going to lure him where I want him, then expose him for what he really is.  Those sycophants, those disciples, will leave him behind when they know what I know.  When they know just what kind of man they have made their king.

If I am eliminated, so be it.  But I can't keep living with this shame.

I'll remove that halo.  I'll bury him figuratively before I do it literally.  Or I'll die trying.