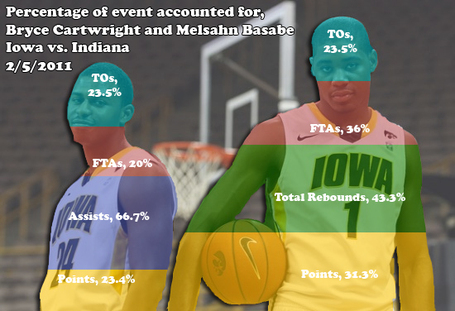 Well that was the coolest thing to happen for Iowa basketball in Bloomington since this:

At the 7:52 mark in the second half, it felt like Iowa had lost this game.  The Hawks were down 58-48, Melsahn Basabe had just turned over an inbounds pass to give Indiana an easy lay-up, and the crowd was still buzzing from an amazing Will Sheehey dunk a few minutes earlier.  I was all set to write the following epitaph for the game: "Road victories are hard to come by in the Big Ten: you have to do everything perfect, and, as well as the Hawks played tonight, they did not play perfectly, and lost a winnable game."  Eight minutes later Iowa was celebrating an improbable 64-63 victory, the crowd was stunned, and Tom Crean looked like he was ready to vomit with rage.  What happened?

It was all pretty stunning, and it started with defense.  Without those two steals and the easy points they led to, it's hard to see how Iowa could have come back.  May deserves a lot of credit for taking a calculated risk on the first steal that started it all (and Fran deserves credit for deploying some pressure there) and making a good throw-ahead to Cartwright.  Cartwright, in his turn, did a very savvy thing to convert the layup, pausing a split-second before going up and drawing a foul from Oladipo (who looked like he was in great position to block the shot).  Basabe caught Sheehey napping on the ensuing free throw attempt, grabbed quick inside position, got the offensive rebound, got fouled, and made two free throws.  With the ensuing Basabe steal and May layup, Iowa had shaved six points off the Indiana lead in just 28 seconds.
And at that point, Indiana started to look a little scared, and Iowa looked like the aggressor.  The Hawks played with confidence and activity down the stretch on both offense and defense, forcing Indiana into tough jumpshots and then making tough shots of their own.  Bryce f***ing Cartwright, in particular, made two shots that were at least 8/10 on the difficulty scale.  I could try to describe them, but just go to the highlights (Cartwright's goodness starts at 2:22, but the whole clip is worth watching).  Cartwright has made tremendous strides as a passer this year, but the thing he does best is taking his man off the dribble and scoring, and he provided the crucial points in this game.
There was, of course, quite a bit of game before the final eight minutes, and in spite of the 10 point lead Indiana had by then, we really did play well for most of the game.  Indiana amassed that lead in three ways: Jordan Hulls making jumper after jumper until we had the novel idea of doubling him, the refs allowing Indiana to elbow, poke, and prod us on every single offensive play, and Will Sheehey.  And his (admittedly impressive) dunk.  Take a minute and check it out.  That's some Hakim Warrick/Amare Stoudemire style power there.  I think Sheehey may have gotten a little too amped up by it, though, especially after he tried to dunk on Cole on the ensuing play and followed it up with some  significant smack talk/"King Kong ain't got nothin' on me"-style posing.
Right after that dunk, though, Assembly Hall went from loud to deafening, and the Hawks looked like they were toast.  Indiana was in great position at the eight minute mark to just slow down the game and run out the clock, but they lost their focus for just a minute, and that was all it took for Iowa to get back in the game.  The Hawks and Coach McCaffery deserve a ton of credit for keeping on fighting (and pressuring) the Hoosiers even when things looked bad, and the final eight minutes were about as poised and ruthless as this team has looked all year.  The Michigan State victory was nice, but the difficulty level of this win was several notches higher.  Here the Hawks were facing a hostile crowd, a desperate and feisty opponent, and refs who allowed that feistiness to border on professional wrestling, but they played like a veteran team, made shots like assassins, and pulled out a game they could have easily lost.  Kudos, and kudos again, sirs.
Stray observations: