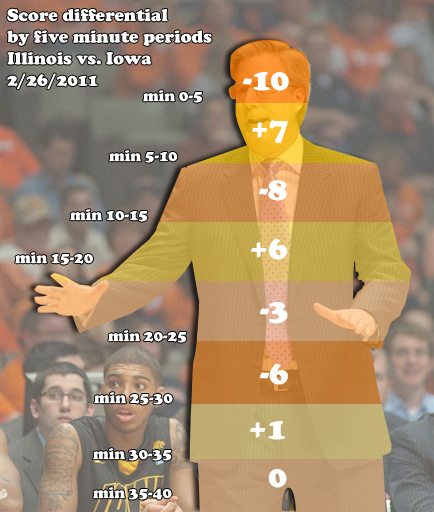 Going to the heart of the orange hell that is Champaign, Illinois and winning a game is a tough enough task to begin with, but when you allow the Illini to open up a 10 point lead in the first five minutes of the game, that task becomes nigh impossible.  Iowa started off yesterday's game with the following miserable sequence:

Almost five minutes had passed before Devyn Marble broke through for our first basket, but by then we were down ten and the margin of the game had been more or less set.  We played the Illini pretty close to even after that point, but the hole was too deep, and we could never quite dig ourselves out of it.
The reason for that initial deficit and the eventual margin is not that complicated: it wasn't rebounding, because we were pretty close to even with Illinois in offensive and defensive rebounding percentage; it wasn't foul shooting, because both teams had 18 free throws and Iowa actually made a higher percentage on them; it wasn't turnovers, because we had 14 and they had 13; no, it was shooting.  Illinois shot an eFG% of 60.7%; Iowa shot 44.9%.  Iowa found itself in the same situation as many a pick-up team at the field house: if you don't have a shooter and the other team does, it doesn't matter how hard you work on defense or the boards, you are going to lose.
Iowa also faced the other common field house problem of trying to win when the other team has that one super-gangly tall guy and everyone on your team is just normal: Illinois had 6'9" Mike Davis and 7'1" Mike Tisdale, and those two helped Illinois on its way to 14 dunks or lay-ups (out of 31 made field goals), in addition to making things miserable inside for Iowa.  The Hawks also got burned a few times when they attempted to pressure the Illini, most notably when they lost Tisdale completely left the big man all alone under the basket for a dunk.  This embarrassing play may have resulted from Basabe leaving his post as last man back, or it may have been the result of some crafty camouflage by the Illinois senior.  My suspicion is that Tisdale adopted the tactic of the phasmatodea or common stick insect and arranged his thin, angular, pasty-white frame so that it resembled a basketball support: 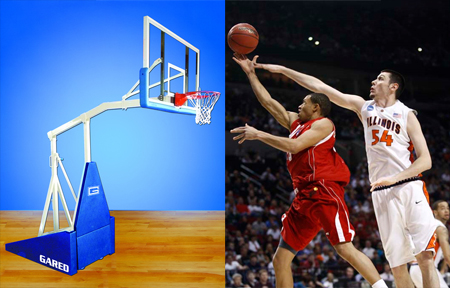 Tisdale did have a great game, though, with 25 points -- lots of inside easy stuff, but also a couple of long threes.  Iowa just doesn't have the height to really pester someone like that once they get the ball inside, and we showed no interest in following out beyond the arc.  Davis scored 20 on 8-12 shooting, Demetri McCamey had 18 on 7-11, and those three players accounted for 63 of Illinois' 81 points.
It's kind of hard to believe that Illinois is .500 in the Big Ten, because this team has a lot of weapons and a serious home court advantage.  Looking at their schedule, though, it's clear that Illinois' Big Ten mediocrity is just another result of the Big Ten being really, really good this year: they have one loss at Wisconsin, two losses to Ohio State, a loss at Purdue, and then losses to Michigan State, Penn State, Northwestern and Indiana by a collected 10 points.  The only really bad loss of the bunch is the one to Indiana.  The others have been very close and on the road against solid teams.  It's telling of the strength of the conference that even with eight conference losses, Illinois is still ranked #22 in Ken Pomeroy's rankings.