Winning Time: Handicapping The Race For Big Ten Wrestler Of The Year

Share All sharing options for: Winning Time: Handicapping The Race For Big Ten Wrestler Of The Year 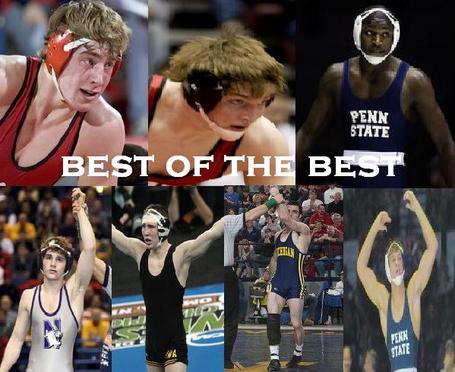 We're just a little over a week away from the Big Ten Tournament and the conclusion of the Big Ten season (and, indeed, the entire wrestling season sans that little thing called the NCAA Tournament that's kind of a big to-do), which means not only are we just a few weeks away from crowning a new champion (or ten), we're also a few weeks away from learning who gets named Wrestler of the Year in the Big Ten.  It seemed like it might be a good idea to break down the candidates.

* Anyone who has more than one loss is automatically eliminated from consideration.  There are already at least seven wrestlers in the Big Ten who could finish with 0 or 1 losses on the season.  That's your pool of contenders right there; no one else need bother applying.

* Similarly, this assumes that the listed wrestler wins their weight.  If you can't do that, you can't be Big Ten Wrestler of the Year.

* Upperclassmen tend to get priority over underclassmen.  It's not necessarily fair (or right), but that's the way it goes.  If two guys are basically equal, bet the farm on the nod going to the upperclassmen.

* The rankings cited are the end-of-season Intermat rankings, which is slightly problematic -- some guys are wrestling better or worse now than they were at the time they wrestled the opponent in question.  However, I'm sticking with it because (a) I don't have the time or the energy to look up the at-the-time rankings and (b) by and large, the guys who are good now were good at the start of the season and have stayed (relatively) good throughout the course of the season.

THE NO-HOPER
This guy has no realistic shot (even if everyone ahead of him lost), but I felt obligated to include him anyway.

PROS: Undefeated.  Two wins over top-10ish foes.  Could add two more wins over top-10ish foes in the BTT.  Bonus points in almost 75% of his matches.
CONS: Uh, only wrestled eleven times so far this year because of injury.  That's a dealbreaker.  Brandvold gets recognition here because he's still the #2 ranked guy in the nation at his weight, but he has no hope of winning the award.

THE LONG SHOT
This guy doesn't have a very realistic shot of winning, but if everyone else ahead of him loses, well...

PROS: Eight wins over Intermat Top 20 guys is very solid.  He's an upperclassmen.
CONS: He's not undefeated.  His eight wins against Intermat Top 20 guys have come against just six different opponents and only one was against a top-five opponent.  He has a real lack of bonus point wins, too.  Winning is good, but everyone on this breakdown has won a ton (aside from Brandvold, who was dealing with injuries), so style points do matter as a way to differentiate between guys.  There's only one other Top 10 guy in the Big Ten, so he's not going to have many opportunities to add quality wins.

THE DARK HORSE
His resume is a step below the guys ahead of him, but it's still very good and if they trip up and he excels at the Big Ten Tournament, he could be a legitimate option.

PROS: 19 bonus points is very impressive.  11 pins is tied for the most of anyone on this list (along with McDonough).  His back-to-back wins over Lewnes and Henrich (1-2 at the time) is a very impressive feat.
CONS: It's not really his fault, but his loss to Letts is the worst loss suffered by anyone else on this list, in terms of rankings.  A series of losses have sent Letts tumbling down the Top 20.  Outside of the two wins over Lewnes and Henrich, Ruth doesn't have any other wins over Top 5 competition.  The fact that he's just a redshirt freshman doesn't help his case, either, in a year with so many other strong contenders.  Like 184, the Big Ten doesn't have many elite options at 174, so Ruth isn't going to be able to add a lot of high quality wins to his resume during the BTT.

THE CURIOUS CASE OF 125
Obviously only one of these guys can be a legitimate contender because for one of them to win 125, the other will have to lose.  So whoever wins emerges as an outside contender, while the loser is summarily eliminated from this conversation.

PROS: Gaudy record.  Lots of bonus point wins (including 9 pins).  Along with Ruth, he's the only one guy on this list who can claim a win over the #1-ranked guy at his weight.  Could add a pair of wins over Top 5 guys at the BTT and if he beats McD that would give him two wins over a top-ranked guy.  He's also an upperclassmen, which never hurts.
CONS: His pinfall loss to Matt McDonough was a little fluky, but he's also the only guy on this loss to get pinned, which doesn't look particularly good.  Outside of McD, he hasn't faced much in the way of elite competition.

PROS: Getting bonus points in 17/21 matches is mighty impressive, especially the 11 pins (and the six-match pinning streak).  He also has four solid wins over Top 10 guys (including two bonus point wins) and could add two more at the BTT.  His status as the reigning national champion at 125 gives him a lot of credibility.
CONS: He is still an underclassmen and while it should be a pretty minor point, because of scheduling irregularities, he has far fewer matches this year than most of the other contenders on this list.  Also, we can't really ignore that he does already have a loss.

THE FAVORITES
Those other guys only have a shot if one of these guys falters at the Big Ten Tournament -- they're the obvious favorites based on their resumes.

PROS: 31-0 with 30 bonus point wins is pretty much unimpeachable (unless you want to get on him for not getting many pins).  He's decimated the competition at this division.  Seven wins against Intermat Top 20 guys is as many as anyone on this list -- and he could add a few more notches to his belt at the BTT.
CONS: On the other hand, only one of those wins has been over a Top 5 guy.  It's not his fault that the Big Ten isn't particularly strong at 157, but it is a problem when his main competitor has so many wins over Top 5 guys.  He's also just a freshman.

PROS: 9-0 against Top 20 guys, with eight of those wins being against Top 10 guys (and five of them against Top 5 guys) is tremendous.  He's beaten the #2, #3, #4, and #5 guys at this weight; if this was MMA you'd say that he had cleaned out his division.  No one else on this list can say that.  And if he wins the BTT, he'll likely add two more wins over Top 5 guys to his resume.  He's also an upperclassman.
CONS: On the other hand, he has just a third as many bonus point wins as Taylor, so he hasn't been dominating his competition to the extent that Taylor has.

Essentially, this race comes down to Russell versus Taylor, assuming both men win out at the Big Ten Tournament.  If they do, it comes down to what factor carries the most weight: bonus point wins and staggering dominance or an incredible collection of high-quality wins.  I think the quality of the competition on Russell's resume (and his upperclassman status) sways the debate in his favor, although I wouldn't be too stunned if Taylor's sheer dominance was rewarded, either.  If both guys stumble at the Big Ten Tournament (and while that wouldn't be a huge shock with Russell, given the close nature of many of his matches and the caliber of foes he'll be facing, it would be quite a surprise if Taylor lost), things get interesting and either McD/Precin or Ruth could take home the top prize.