This game had a strong sense of deja-vu about it.  Just as in Iowa's recent loss to Wisconsin, Iowa kept the score close with a superior team and had a decent shot to win the game on a Bryce Cartwright shot on the right side of the court, and both times the shot rimmed out, the game went to overtime, and the Hawks couldn't keep up in the extra period.

But the similarities went deeper.  Both games followed the same pattern:

Here's a bonus graph to show you what I'm talking about: 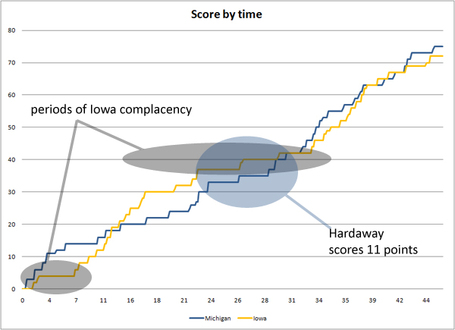 In the Wisconsin game, the superior athlete was Jordan Taylor.  In the Michigan game, it was the combination of Tim Hardaway Jr. and Darius Morris, but mainly Hardaway, who absolutely took over from about the 18 minute mark in the second half to the 10 minute mark.  Michigan tends to rely on their three-point shooting, with sharp-shooters like Zack Novak, Stu Douglass and Hardaway taking shots off of drive and kicks, and Iowa did a brilliant job of denying those drive and kicks: Michigan finished 6-20 on threes, and of those six, not many came within the flow of the offense (five were just Hardaway being unguardable and shooting over our defense).
It's tempting to say that Iowa just doesn't have anyone who can guard players like Hardaway or Morris*, but it wasn't just our defense that failed us yesterday.  There was also the fact that for about ten minutes the connection between our brains and our hands was temporarily severed (I think some other organ -- maybe the kidney? -- was calling the shots).
* Just to be clear, we don't.  Devyn Marble started the game and marked Hardaway for much of the game (which is, I would guess, why he started; Fran also cited a desire to light a fire under Eric May, whom the coach said had been "pressing a bit at the start of the game"), and did a pretty good job.  It's no coincidence that Marble got his third foul one minute in to the second half, had to sit and immediately afterward Hardaway's explosion started.  Beyond Marble, though, every player on Iowa has problems with one-on-one defense: Cartwright is too short, Gatens is too slow, McCabe is too slow, May takes poor angles and has some lateral quickness issues (May was driving me crazy with his defense yesterday by the way.  He did something that I saw Vince Carter do against LeBron James last year in the playoffs, which I think of as "Maginot line defense."  Basically it's when you play too tight defense against a player who you know can beat you off the dribble.  It looks like tight defense, because you're up in the person's face and really pestering them, but a quick step around you and the Germans are marching to Paris.)
We had several inexplicable turnovers, where players were passing the ball to people who weren't looking or weren't ready for the ball.  Brommer in particular had two terrible turnovers at around the 12 minute mark in the second half, both of which led to points for Michigan.  He followed up his second by unnecessarily fouling a Michigan player who had gotten an open layup as a result of his turnover (he wasn't seen from after that).  All of those little mistakes added up.  When we had returned to normal brain function late and were fighting for the lead late, it would have been nice to have a few of those possessions back.
We did fight valiantly at the end, and, again, if Cartwright's shot would have bounced in, we would have won this game.  And the credit for the fact that we were so close, in spite of our temporary failings, goes to a couple players: Marble, for outstanding defense and some nice offense (including a couple very tough jumpers); Jarryd Cole, for another outstanding game on the offensive glass, and for going 8-9 from the free throw stripe; and Melsahn Basabe, who, when he got the ball in the post, was hard to stop, going 8-10 from the field.  Marble has been a very nice surprise, especially with his D, and Cole deserves a lot of credit for raising his game in recent weeks.  Basabe's 19 points were great, but did anyone else get the feeling he could have had 30 if we could have just gotten him the ball?  Michigan kept fronting him with Novak, and when Basabe got the ball, he had no problem taking that guy to school.  They also consistently brought Jordan Morgan on the weak side to double Basabe once he did get the ball, which meant that the freshman got few clear chances to work one-on-one on the block.  I don't know what we need to do to get Basabe the ball -- have better shooters to space the floor? -- but he is a handful for most Big 10 defenders.
In the end, this game came down to the fact that in a game with only five players on the court, one or two guys can decide a game.  Hardaway and Morris accounted for 50 of Michigan's 75 points, and if we add Morgan to the mix (who made most of his points on easy dunks from Morris), three players scored 68 of Michigan's 75 points.  We played harder than Michigan (as you can see in our rebounding numbers) and smarter, too (our dumb turnovers excepted), but Michigan had the two most talented players on the court, and that was enough.
Stray observations: