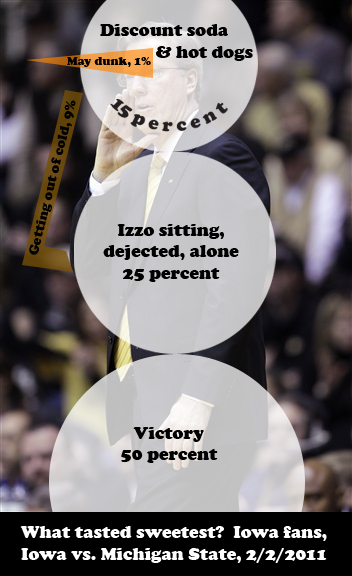 This had all the markings of a game Iowa could have quietly lost without anyone much noticing: Iowa City had just gotten 15 inches of snow dumped on it, the arena was half-empty, and Tom Izzo was coaching the other side.  So it surprised the hell out of most fans in attendance when Iowa roared out to a 24-8 lead in the first ten minutes, then continued to pummel the Spartans for a full 40 minutes en route to a dominating 72-52 victory.

Make no mistake: we flat-out rolled MSU.  And victory had a thousand fathers, or at least six:

It was a beautiful sight to see.  The Hawks finally put together all the aspects of their game.  They shored up their perimeter defense in a big way: as mentioned above, Fran had his big men show hard on the pick and roll at the top of the key, sometimes even double-teaming and trapping the Michigan State guards, which really seemed to stymie their offense.  The Spartans looked out of it on offense, but our defense looked the best it has all year.  When we forced a shot-clock violation in the first five minutes of the game, you knew it was going to be a good night for the defense.

And the defense led to offense, naturally enough: Iowa forced 16 turnovers, and that led to several fast breaks (including May's Keblerization).  Iowa also did a better job of turning rebounds into semi-fast-breaks and played most of the game with a fast, assured tempo.  It was just a really nice, competent game of basketball.  There was a moment in the second half when Iowa looked like they were going to let Sparty back in the game, but it didn't last long: we had allowed our lead to shrink from 25 to 15 in the span of two minutes and Keith Appling was driving in for a sure layup when Eric May swooped in, blocked the shot, controlled the ball as he tip-toed the sideline, and made the outlet pass.  Gatens got fouled on the ensuing possession, made two free throws, and the lead never felt in doubt after that. 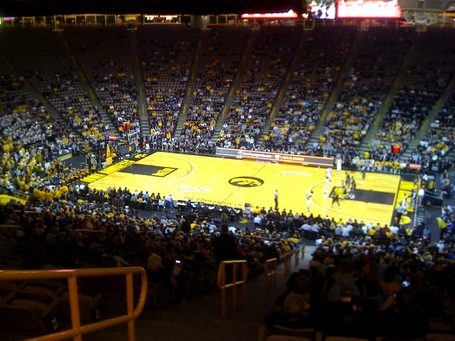 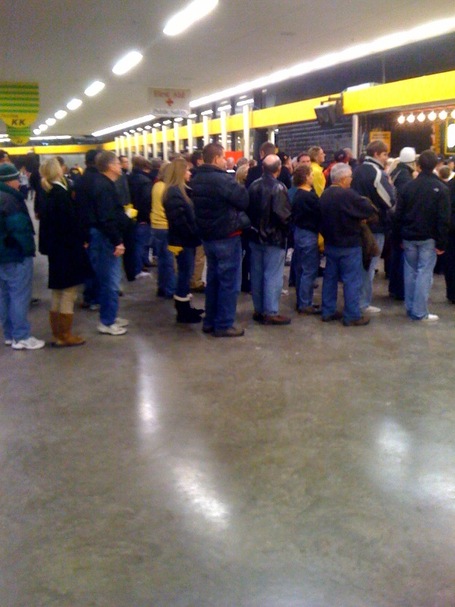 HIM: Would you like some pretzels or something with that?

ME: No, just the free soda please.

HIM: How about some popcorn?

ME: No thanks, how 'bout some free soda?

HIM: There you are, sir, have a nice day.