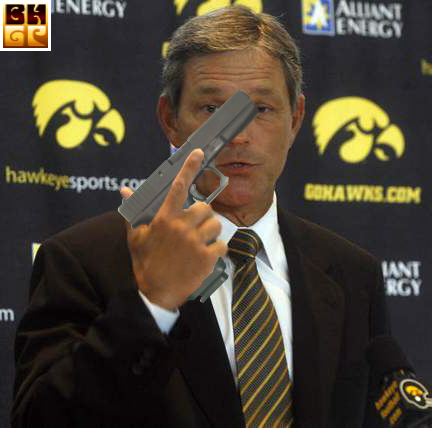 "I'm sorry, did you ask about the strength program?"

Kirk Ferentz finally goes live at 3:30 this afternoon, ostensibly to talk about today's signings.  It's highly unlikely it stays that way for long, though.  This will be Ferentz's first press appearance since thirteen players were admitted to the hospital for rhibdomyolysis ten days ago, and he's taken a metric ton of abuse from the media in those ten days (some deserved, some not, to be fair).  If reporters can get through to the football complex (per edict of Ferentz, Iowa City road crews have surely been piling up a snow barricade on Hawkins Drive since late last night), this could be interesting.  Or it could be like every other press conference Ferentz has ever held.

According to Morehouse, the press conference will be available streaming from KCRG.  I would assume the Gazette guys will also be doing something in text format for the visually challenged among us.  Thread is open.  Have at it.