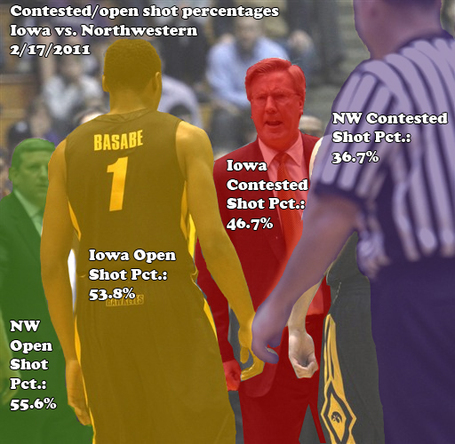 This entry will be a little short, because it's late and because I listened to a few too many Ray Stevens songs earlier and may have i-overdosed.  This was a game that Iowa certainly could have won, but a few things kept them from that goal:

1) Melsahn Basabe got in foul trouble.  The legitimacy of some of those fouls is debatable.  I didn't see any replays, but three of his first four fouls seemed of the whisper-light variety.  In any event, his foul trouble necessitated Fran pulling him for several long stretches in the game, and that hurt, because he was killing Northwestern inside.

2) Three point shooting.  Northwestern shot 28 threes and made 12, which is actually pretty bad for them.  But we only got off 12 threes, making five.  For the most part, we were working our asses off inside for shots that were worth 2/3 as much, and so we pretty much had to be 3/2 better than them to break even.  We didn't quite make it.

3) Our bad foul shooting reared its head again.  Matt Gatens missed two of his three freebies, Devon Archie air-balled the first of two shots (then bricked the second), and Iowa went 5-12 overall from the line.  Turns out we could have used those seven points.

4) Dumb turnovers.  Our turnover number wasn't extremely high -- 12 -- but we had some really unforced mistakes, like the two times Gatens was trapped and tried to wriggle out instead of calling the time out (he turned it over both times), or the time Zach McCabe got trapped at half court right before half, giving the ball back to Northwestern for the final shot (which they made to go up two).

5) The lost five minutes.  After the first official timeout, Fran (who was HOT on the sideline), pulled the starters and went with a line-up of (I think) McCabe, Devyn Marble, Andrew Brommer, Devon Archie and Jordan Stoermer.  When the starters went out we were down 10-5.  By the 10:35 mark, the Northwestern lead had grown to 13, and when the starters came in around the 10 minute mark, the lead was 9.  McCaffery had good cause to be pissed at the starters -- the first five minutes looked like a replay of the last Northwestern game, with plenty of open looks from three -- but the all back-up line-up was lucky to keep the lead to just nine.

I won't go into the refs too much, because it's standard operating procedure to get a little screwed on the road in the Big Ten, but, really,  those fouls on Basabe?  Come on, let the guy play.  Shurna does weigh 135 pounds, but that's not Mel's fault.  And the timeout they awarded to Northwestern even though the ball was loose on the floor?  Fran went into a volcanic rage about that, and he was right to.

Our MVP was probably a tie between Cole (7-8 shooting, 8 rebounds, 4 offensive rebounds, 17 points), Basabe (6-11 shooting, 7 rebounds, 13 points in only 20 minutes), and Bryce Cartwright (9 assists and the hard to calculate value of  managing the offense and navigating the Northwestern zone).  Hopefully the graph gives you an idea of how well Iowa shot in tough circumstances tonight.  Both Iowa and Northwestern had half of their shots contested and half open, and Northwestern relied much more heavily on open shots (mainly threes).  Northwestern went 12-28 on threes, and by my count, only 10 of those threes were contested.  So we got kind of lucky, to be honest.  Our offense relied on very tough contested shots near the basket (my shot chart has just a cluster of made shots at the rim for Iowa -- 36 out of our 58 shots were in the painted area -- and we made many of them.  It shows that our offense is in the tough spot of not having much of an outside presence to stretch the floor, and that we rely on our inside game to make things go.  Those guys (namely Cole and Basabe) did heroic work muscling baskets in and grabbing offensive rebounds, and Cartwright did a nice job setting them up for easy baskets on the pick and roll.

Oh, and Zach McCabe played very well, especially in the first half.  His size and three-point range causes real problems for opposing teams, and when opponents bite on his fake, he can dribble a bit and make a nice mid-range shot.  He should be pretty good in coming years.