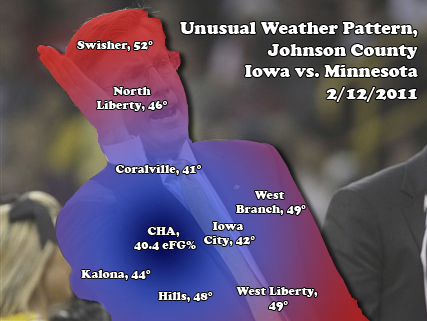 The weather was pretty wonderful in Iowa City this weekend: temperatures climbed over 40 degrees, the mountains of brown snow started to melt and run in the streets, and fans streamed through the balmy weather to watch the improving Hawks.  There was only one problem: a vortex of ice-cold chill had taken residence in Carver-Hawkeye Arena and curiously affected only players in white jerseys.  Iowa was cold yesterday: painfully, painfully cold.

Things looked so promising to  start the game.  The crowd was full and very loud, especially after Iowa's swarming defense caused a couple of turnovers early, helping us to a 14-6 lead at the 10 minute mark in the first half.  But there were scary signs even then: missed shots, bizarre turnovers (like Bryce Cartwright's more than optimistic 60-foot alley-oop pass to Eric May), ticky-tack fouls (including two on Melsahn Basabe, after which Fran McCaffery pulled the freshman from the game), and a general sense of frustration on offense.  Eventually Minnesota figured out how to score a little bit, but we never did.  Ever.

How did this happen?  Minnesota played a very simple game plan against us: they played a 2-3 zone with their three big men (Colton Iverson, Ralph Sampson III, and Trevor Mbakwe) in a line in front of the basket, and their guards chasing shooters.  Here's what we saw 100 times today: 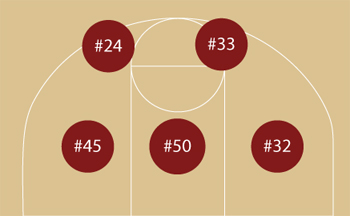 I could be missing the nuances of what they did here, but it seemed like Minnesota stayed in something like this defense all game.  And so the game had the simplicity of a mathematical equation or a puzzle, the only question being, could Iowa solve it?  We clearly had a plan A to attack this zone: find a shooter in the deep corner before the big man could rotate over.  And Iowa got some decent shots this way.  But this strategy demanded that our shooting aces, namely Matt Gatens or whoever was playing Gatens' role when he was off the court, make those shots.  And Gatens simply couldn't make them tonight.  He took eleven shots (all eleven of which were threes), and made two.  It was his coldest game since, as it happens, our last  game against Minnesota, when he went 5-21.  And the rest of the team was just as cold from deep: May was 1-5, Marble was 0-2, McCabe was 0-2, and only Cartwright seemed to have any touch at all, going 3-7.

So plan A failed.  And that's when things got dicey.   Because, as it turns out, there was no plan B.  Whenever Iowa tried to drive into that forest of arms* in the lane, the usual result was a block, a turnover, or a missed shot.  Minnesota didn't do anything fancy.  They just stood there, waited for us to come at us, then stretched their arms up and dared us to shoot over them.

How could such a simple plan work so well?  It's not the most encouraging answer, but a major part of it is that Iowa is short and Minnesota is tall.  Jarryd Cole was giving up five inches to Sampson, Basabe was giving up four inches to Iverson, and May was giving up three inches (and twenty pounds) to Mbakwe.  The Hawks had no one who could shoot over a Minnesota player one-on-one, and, given our poor shooting, we never got one-on-one looks.
What else?  The combination of our size and poor shooting created a difficult trap for our offense, but I can't shake the feeling that even within those parameters we played like crap.  Like I said, we had no plan B.  When the shots weren't falling, we looked like we had no idea how to penetrate the zone, and our offense devolved into aimless passing around the perimeter and desperate attempts to lob the ball over the zone (attempts which failed, always).  We rarely got inside the zone off the dribble, which meant that Minnesota's big men rarely had to move or even think about what to do, and could just stand there like big, meaty fence-posts obstructing our view of the hoop.  That also meant that Minnesota's big men didn't have to worry about getting in foul trouble, because we were steering well clear of them: Iverson, Sampson and Mbakwe all played about 30 minutes, and none of them got more than three fouls (Sampson only got two).
Maybe it's wishful thinking to imagine that Iowa could have sliced and diced their way around the Minnesota big men without the aid of a three-point threat.  Minnesota is a good team with size that very few college teams can match, and we certainly were at a disadvantage there.  It would have been nice if Iowa had had a counter-punch to fall back on tonight, because our first punch certainly wasn't landing.  Which is a tribute to Minnesota, really.  They executed their game plan, made sure all of our shots came a little hurried and a little desperate, and then formed a brick wall around the basket to collect rebounds.  But at the same time, it's hard to view this game as anything but a step backward for the team, especially after the great progress they had shown against Michigan State, Indiana and Wisconsin.
Stray observations: