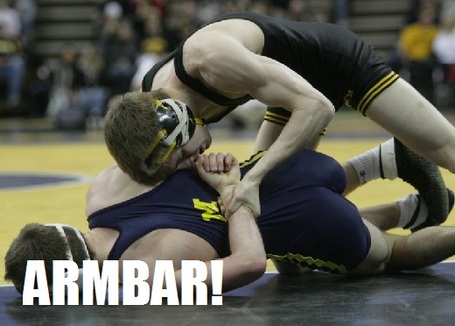 The meet began with a pin and ended with a pin and in-between the action was... mostly good.  The end result was another pretty dominant performance and a win that stretched Iowa's unbeaten streak to 76 duals in a row and gave the Hawks another perfect home record.  Yawn.  The headline match was the showdown between #1 Kellen Russell and #3 Montell Marion at 141, which was uneventful for two periods before exploding into action in the third.  Marion picked up a pair of nice takedowns, but his attempt to get a third late in the period to lock up the victory backfired, allowing Russell to get a takedown of his own and tie things up.  A quick takedown in overtime later and Russell was the winner.

It was a painful way to lose and the obvious response would be for Marion to back off and be more defensive when he has a late lead, but (a) that can backfire too (see: Ethen Lofthouse's match on Friday) and (b) that isn't the philosophy that Iowa drills into guys.  The philosophy is "attack, attack... and keep attacking." More often than not, it pays off handsomely, but occasionally it backfires as it did here.  The lesson is not "don't attack," but to learn from mistakes and use smarter attacks.  There's a good chance Marion will see Russell again in a few weeks; we'll see then if he's learned from his error here.

125: Another match, another victim.  McD logged his sixth straight pin, which is just ridiculous.  It's also his seventh pin in seven Big Ten dual meets: if he can pin Minnesota's Zach Sanders, he'll have managed to pin his way through the Big Ten.  Not even Metcalf managed that.  McD is an absolute goddamn machine right now.

133: Stevens executed a stall-tastic gameplan to perfection for most of the match, but Ramos blew up for two takedowns and a pair of nearfall points in the final thirty seconds.  Ramos' relentless motor is probably his best attribute; there aren't many guys at 133 that can hold him off for an entire match.

141: See above.  A frustrating loss for Marion, but not much of a surprise (no one has solved Russell yet this year) and one that's eminently easy for Marion to build on.

149: This was the biggest disappointment of the meet, without a doubt.  Not much is expected out of Iowa at this weight, but the hope was that Mark Ballweg could at least be competitive out there -- especially against an opponent like Grajares, who's had plenty of struggles this year (though he was a top recruit a few years ago).  If he's going to go out there and get shoved around and give up a major decision, he's really no different than the other guys Iowa has tried at this weight.  Granted, the size issue is going to be a major disadvantage for Ballweg the Younger the rest of the year, but hopefully he doesn't get absolutely manhandled the way he did today.

157: Another very solid performance for DSJ.  He again showed great ability to turn wild scrambles into point-scoring opportunities for himself (his ability in that respect is definitely Borschel-esque) and he pushed the offense enough to get a solid decision win here.  Bonus points would have been nice, but outside of the shellacking at the hands of Penn State's David Taylor, he's really been wrestling quite well over the last few months.

165: Speaking of guys who have been wrestling well over the last few months, Janssen has really been on a nice tear.  Yates isn't great, but he's ranked and a solid wrestler -- and Janssen was all over him from the opening whistle.  If Janssen can keep this up for the next month, he has an excellent chance to finish his Iowa career as an All-American -- which would be a nice way to end what has been a pretty tumultuous career.

174: The younger Lofthouse was the lone disappointment in Friday's dual against Purdue, giving up a pair of third-period takedowns to lose to Luke Manuel (a loss that could be very costly in terms of Big Ten seeding), but he rebounded fairly well here.  It was important to get a win here and he did that, although he tailed off a little after a strong first period.  On the other hand, despite his unimpressive record, Zeerip can be a tricky opponent -- Borschel struggled against him a year ago.

184: Another fast start for Gambrall, another lackadaisical finish for Gambrall.  He jumped out to a 4-2 lead and then did... not much, frankly.  This has developed into a bit of a pattern for Gambrall and so long as he keeps getting wins, there's not much to really complain about, but it's still frustrating.  He seems capable of much more.  Although, in fairness, it's possible that Gambrall was just too freaked out by Collins' creepy-as-shit mustache.  Holy TCAP, Batman.

197: Meanwhile, Janssen isn't the only Hawkeye senior seemingly hellbent on ending his Iowa career on a high note; "Grampa" Lofthouse wants to end his (very long) Iowa tenure with a bang, too.  He picked up his second straight win over a top-ten opponent (and he might have had three in a row if Purdue's Logan Brown hadn't sat out their match on Friday), which is frankly astonishing, when you consider Lofthouse's track record.  For the longest time, Uncle Luke was the quintessential nearly man: oh-so-close to finishing off shots and picking up wins over big-time opponents, but never able to seal the deal.  Now he's finishing those shots and beating those guys and it's great to see.

HWT: And speaking of guys who really needed to get that breakthrough win... holy shit, Blake Rasing, where did that come from?  After giving up a quick takedown, it looked like we were going to be adding yet another chapter to Rasing's book of struggles against ranked opponents... and then the bear woke up from hibernation and took it to Apland.  For once, Rasing took advantage of his notable size advantage and overpowered his foe, using a bearhug to take Apland down to the mat and holding him there to score a very impressive pin.  We knew Rasing was capable of wins like this -- we just hadn't actually seen him do it against top competition.  Hopefully this serves as the breakthrough he needs to turn into a legitimate threat the rest of the season.  Iowa sure could use some points from him at the Big Ten and NCAA Tournaments.

NEXT: Time to go Gopher-hunting.  The Hawks head up to The Barn next Sunday (2pm CST) to try and close out another undefeated season in the Big Ten.