We Must Break You Snaps Into A SlimJim

Share All sharing options for: We Must Break You Snaps Into A SlimJim

We Must Break You is the weekly round-up of news regarding the Iowa wrestling program, a breakdown of the rankings, and a look ahead to the weekend's action.  Feel free to send any links, tips, suggestions, complaints, or bribes to bhgp.rosswb@gmail.com 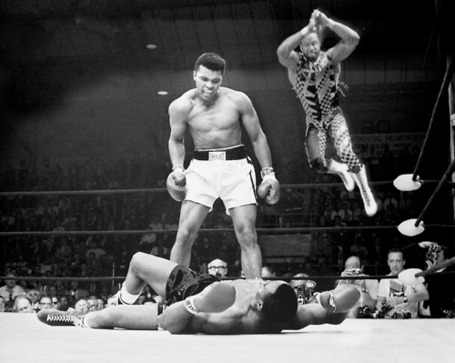 Where's Randy Savage?  (and so many more here)

Programming note: The Iowa-Michigan dual will be aired on IPTV at 1pm CST on Sunday  It was also supposed to be live streamed on BTN.com ($$$), but I haven't been able to confirm if that will still be the case.  Nor, for that matter, if IPTV will be offering a stream on their website.

Swagger: we has it.  It may be anathema to Kirk Ferentz and the football team (except when Matt Roth was here, anyway), but Tom Brands and the wrestlers live it and love it.  What is "it"?  Why, StoopsMyAss' favorite concept, of course: swagger.  Sez J.T. Bugos in The Daily Iowan

So if confidence isn’t the right word, maybe swagger is.

Tony Ramos shows it with his walk. Montell Marion shows it in his talk. And Derek St. John shows it in neither his walk nor talk but instead by beating two top-10 opponents in a week.

All the grapplers show it on the mat, which is ultimately where it counts.

When you've won three straight national championships, ranked 2nd in the nation in a rebuilding year, and coming off a string of dominating wins (33-3, 31-9, and 35-6 in three of the last four meets), well, swagger comes naturally.  But, in all seriousness, swagger has been an intrinsic element of Iowa wrestling since Gable built the program in the '80s and it's helped them win more matches, meets, and championships than I care to count.  In an individual sport like wrestling, you need every advantage you can get -- swagger's just one more edge Iowa has on so many of their opponents.

Return of the mack.  The DI also got a nice Q&A with Montell Marion this week, wherein he talked a little about changes in his life and his road back to the Iowa lineup.  It's a good read:

And a lot of people think that my past accomplishments are the only reasons they wanted me back. Like "Iowa’s not No. 1 anymore, so they need Montell Marion back to add some fuel to the fire." But that’s not the case. We got these young guys; they don’t need me.

The reason that I’m back here is because I made some changes in my life to get people back on my side. And I didn’t do it the easy way. The easy way would’ve been to go to some other school. I had to enroll in classes without a guarantee, a lot of stuff that was hard. The fact that they gave me a standing ovation lets me know that I made the right decision and that people see it and appreciate it.

And he's right: it would have been easy for him to take his talents elsewhere, to a school where he didn't have as much baggage and where the expectations wouldn't be as demanding and where he wouldn't have to guard against the slightest infraction.  There wouldn't have been a shortage of schools willing to take on an NCAA runner-up with two years of eligibiltiy remaining.  But he didn't do that -- he chose to gut it out at Iowa instead.  Bully to him for getting his life turned around and good luck the rest of the season.

Geezers need excitement.  Unlike last year, when seniors comprised all but two starters, this year's senior class is considerably lighter: just two starters (three if you include Ballweg the Elder).  Neither Janssen nor Lofthouse is likely to go down as an all-time great like Brent Metcalf or a fan-favorite like Jay Borschel, either.  But they're good, solid starters who've worked their asses off; it's hard not to root for them to end their careers on a high note.  Lofthouse in particular has come a long way:

Lofthouse's story has a similar beginning -- he enjoyed a celebrated prep career that included three straight Utah state championships -- but until recently that's where the similarities ended.

Lofthouse was thrown into the Hawkeye lineup as a true freshman. He struggled early, posting an 8-17 collegiate record, but his efforts earned him the Coaches Appreciation Award. Then, rather unconventionally, he left Iowa for two seasons to complete a Mormon mission in Africa. He returned to campus and used a redshirt in 2007-08. Since then he's earned his way back into the Hawkeye lineup as a nationally-ranked 194-pounder.

Iowa won three straight national titles without getting significant points from either Janssen or Lofthouse, but they could be key cogs in the quest for a fourth straight national title.  Neither 165 nor 197 are terribly loaded weights, nationally, so Janssen and Lofthouse could pick up plenty of valuable team points for Iowa if they can put together good weeks at the NCAA Tournament.

Not much change for anyone not named "Derek St. John" or "Luke Lofthouse," but that was kind of to be expected.  DSJ and Lofthouse the Elder both zoomed into the top-8, which makes them (on paper, at least) likely All-Americans at next month's NCAA Tournament.  That's a big improvement from a month ago when both guys were idling in the mid-teens and Iowa's lone likely All-American appeared to be Matt McDonough.  Slowly but surely, the pieces are falling into place for Iowa to make a legitimate run at another national title.  They also moved up from 6th to 4th in the Intermat team rankings which, as I discussed last week, are based on predicted tournament scoring, which makes them a useful gauge for NCAA Tournament hopes.

OMHR isn't quite as bad as their record indicates -- they did just upset #6 Wisconsin, 18-16 -- but they seem to match up very poorly with Iowa.  McDonough is on absolute tear (four straight pins, five pins in his last six matches), so I'm not betting against him doing anything but sticking anyone who lines up against him.  Eren gave up twelve takedowns to Wisconsin's Tyler Graff a week ago; Ramos has been pretty tenacious the last few weeks, especially against overmatched foes.  Marion has looked a little rusty, but nothing that makes me worry too much about his odds against Fleckenstein.  I suspect a Ballweg will get a win at 149 one of these days and it could happen here against an unimpressive Patatcsil, but my coin-flip said otherwise.  DSJ scored a hugely impressive win last week and really seems to be hellbent on finishing the season well after that loss to Taylor.  But Salazar has only lost one match by more than a decision, so I don't really expect DSJ to get bonus points on him.

Janssen has looked pretty good and he shouldn't have too much difficulty with Mosier.  174, 184, and 197 bring Purdue's three best wrestlers, as well as three of Iowa's more inconsistent starters.  Manuel is good and has some solid wins (he has wins over #9 Jordan Blanton and #17 Ben Jordan), and I think he'll be a bit too much for Lofthouse this week. Kissel is coming off a pair of losses and has some unimpressive results on his resume; while Gambrall can be frustrating at times, of late he's been taking care of business, which is what I expect him to do against Kissel.  I probably would have picked Brown to beat Lofthouse a week ago, but Lofthouse's win last week really seems like a breakthrough for him and I think he'll keep the momentum rolling with another win.  And, finally, Rasing has been able to beat up on inferior heavyweights, which is precisely what Vukobratovich appears to be.

On paper, Michigan appears to be more formidable than Purdue -- they're ranked in the top ten, they've only lost three duals all year -- but once again the matchups don't look favorable for them.  Boyle has been fairly scrappy this year -- but he's nowhere near McD's league and, as noted above, until McD stops pinning everyone in sight, I'm not picking against it.  Stevens has kept his losses fairly close aside from a pair of major decision defeats to Andrew Long, but with the way Ramos is wrestling now, I think he can get those bonus points.  Russell-Marion is the unquestioned match of the weekend, with the recently-returned 2010 NCAA runner-up taking on the man who's owned the division all year.  This could be the first of a trio of meetings between these two, depending on how things shake out at Big Tens and the NCAA Tournament.  Right now, Russell seems to have the advantage beacuse Marion still looks a bit rusty and has been prone to putting himself in bad positions at times -- against Russell, that could be fatal (competitively speaking, anyway; it's not like Russell is really going to murder him).

Like I said above, one of these days Ballweg (one of them) will get a win at 149 for Iowa; why not in the final home dual of the season against an opponent that's fairly underwhelming?  Against the top guys in the Big Ten, Zeerip has been wildly outclassed: Welch and Taylor both tech falled him and Taylor got a regular fall (in just over a minute) when they wrestled a week ago; frankly, a major decision may be selling DSJ short here.  Yates is solid, but Janssen is better and, at home, I like him to leave CHA a winner.  The elder Zeerip's had an up-and-down go of things at 174; I think Lofthouse takes cares of him and picks up another win.  Collins has really struggled against the upper echelon of the Big Ten -- Wright pinned him in 34 seconds a week ago -- so Gambrall shouldn't have too much difficulty with him.  Biondo would be Lofthouse's third straight opponent ranked in the top-12, but he's been banged up lately and with the way "Grampa" is wrestling lately, I'm not inclined to pick against him.  Finally, Rasing's deal is the same as it is every week: he could beat Apland (he beat him 6-1 last year, fact), but until he actually beats a decent opponent, I'm not going out on a limb to pick him.