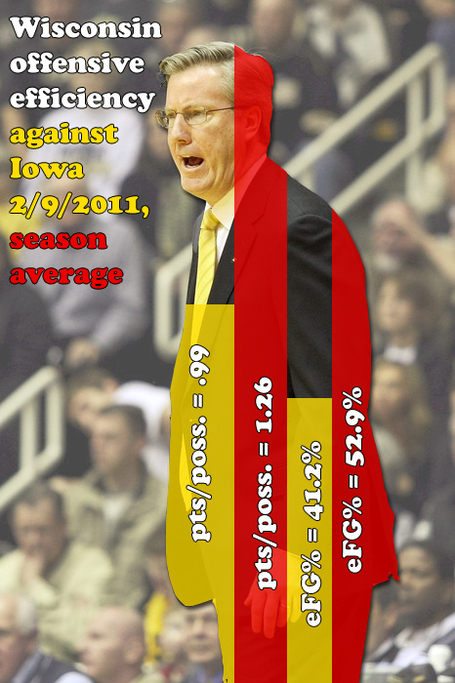 If you had told me before the game we would be up two on the #13 team in the country with 30 seconds left, I would have taken it in a heartbeat.  So is it greedy to say we should have done better in this game?  I don't think so.  Here's the thing: Wisconsin's offense is historically great; they score about 1.25 points per possession, which is first in the country this year and right up there with the best teams of the past decade (and beyond, I would imagine); they also shoot a very good percentage from the field, make threes, and rarely miss free throws.  They are a slow-paced team, so their final scores may not scream offensive juggernaut, but think of the Badgers as a very slow, very precise Swiss watch.  And tonight, there was sand in the gears of the watch, and we failed to take advantage of that.

Or to spin it in a more Iowa-positive way, Iowa's defense played a perfect game against Wisconsin tonight, and their offense failed to take the resulting opportunity and win the game.  The emblematic play for the game is any one of the three missed alley oops that Iowa had in the first half (two of which, had Eric May managed to convert them, would have blown the roof off of Carver; the other was missed by Jarryd Cole).  The first half was full of plays like that for Iowa's offense: careless turnovers, empty possessions, contested jumpers.  Thanks to our defense, however, we managed to lead most of the first half, and wound up with a 23-18 edge at the break.  The fans were excited that we were beating the mighty Badgers, but man -- when a team like Wisconsin shoots 19 motherloving percent in a half, you absolutely have to do better than a five-point lead.  Our defense was good, don't get me wrong -- the switching was constant, shots were contested, and Matt Gatens did yeoman's work denying Wisky star Jon Leuer in the post -- but we were far too content to match Wisconsin's ineptitude with our own in the first half.  I kept thinking, "come on, they are laying an egg, you must kill them now," but Iowa seemed content to stay five up or so.  There's a quotation from Sun Tzu that is relevant here: "So in war the way is to avoid what is strong and strike at what is weak." The Badgers looked weak in the first half, and we had a chance to really blow them out of the water at that point. That may sound like an unduly negative description of what was a near-upset of one of the best teams in the country, but my reasoning is that this Iowa team is sort of grown up now (God willing it sticks), and should be able to handle the responsibility of closing the deal on teams that show weakness.

As it was, the Hawks still played tremendously well, and the game went right down to the wire.  At a certain point in the second half, it even looked as if Iowa was going to pull away for an easy victory.  Devyn Marble had come in and made a couple of crucial jumpers, including a sweet play where he pulled off the Paul Pierce "drag your shooting arm through the defender's outstretched arm before he can pull it away"  move and drawn a foul while also draining the shot (Bryce Cartwright made a similar play a few minutes later when he bated a Wisconsin defender into a foul by hesitating and drawing contact).  Basabe had several crucial blocks down the stretch, including one on Jordan Taylor with 4:45 that sent the Carver crowd (which was about as full as I've seen it this year) into a frenzy, and Iowa was in position to win the game when we took the lead on two Gatens free throws with 1:36 left.  On the next possession, Basabe frustrated Leuer into a travel, and Iowa had a chance to make their lead more solid with a good possession, but Gatens forced a tough jumper and Wisconsin had a final chance to tie the game.  Taylor, who was pretty hard to stop all night, calmly dribbled into a long two and swished it, tying the game.  After Taylor's make, Iowa chose not to take a timeout, which seemed kind of odd, and Cartwright attempted to recreate his Indiana magic, dribbling to the right block and taking a fadeaway jumper.  That was a tough shot against Indiana, it was a tough shot here, and he missed it.  I kind of wish Fran had called a timeout there and set something better up, but we had a decent chance to win the game.

Overtime felt like five minutes we couldn't afford to give a team like Wisconsin.  They had been getting better as the game went on, and seemed more or less up to par by the overtime period.  The Badgers made a couple of threes and a two, we made three twos of our own, and we had a chance with 1:16 left to tie the game, but Cartwright threw an entry pass to an unsuspecting Cole, who let the ball go off his fingers and out of bounds.  After that, it was a desperate game of catch-up, and although we had a chance to tie it at the buzzer with a desperation three, it was close but no cigar.  Kind of like the game.