We Must Break You: Death to the Panthers

Share All sharing options for: We Must Break You: Death to the Panthers

It's in-state HATE WEEK for several Iowa teams this week: the wrestlers got things off to a strong start by pummeling Iowa State 27-9 on Sunday, but the men's basketball team melted down in stupefying fashion against UNI on Tuesday and the women's basketball team lost for the eleventy billionth straight time at Iowa State on Wednesday. Hopefully the wrestlers can get things back on track against UNI tonight (SPOILER ALERT: they will).

Say hello to the bad guy. UNI heads to Carver-Hawkeye tonight with second-year head coach Doug Schwab, better known as a former national champion and three-time All-American at Iowa -- and, oh yeah, Brands' right-hand man during the national title three-peat a few years ago. So he's a beloved figured in Hawkeye lore. For now, anyway:

"I look forward to when they dislike us a lot more," said Schwab, the 1999 141-pound NCAA champion and assistant coach for Iowa in his second year leading the Panthers. "That would definitely mean we’re doing things right. If you’re a threat, people like you a hell of a lot less."

Schwab has his work cut out for him at UNI (the last time they beat Iowa in a dual? 1975), but he might just get things hopping there: he's a good coach and a tenacious recruiter, which should go a long way to helping him turn them into a solid program. There's still considerable distance between Iowa and UNI now, but don't be surprised if Schwab is able to narrow that gap in the years head.

Re-re-rematch? Matt McDonough suffered a surprise loss to Illinois' Jesse Delgado last Friday and while he says all the right things about putting that match behind him and flushing the disappointment of losing, you know he wants to get a little revenge, right? Right:

McDonough fell from No. 1 in Intermat's 125-pound rankings to No. 3, while Delgado rose to No. 6. The two could face each other at the Midlands Tournament at the end of the month or the Big Ten Tournament in March, an opportunity McDonough said he wanted "more than anything."

"You always want a chance to redeem yourself, and there are going to be chances," he said. "I'm going to see him again, and I'm looking forward to it."

Let's hope McD gets another crack at Delgado; after losing to Northwestern's Brandon Precin at Midlands last year, McDonough rebounded to beat Precin in each of their subsequent three encounters. Hopefully he can do the same to Delgado.

Ballweg to the rescue? 149 remains the biggest of black holes on Iowa's roster and the first few weeks of the season have done thing to answer the questions at that weight -- if anything, they've only added new questions. Mark Ballweg got the nod last week, despite being a natural 141-lb guy, and went 1-1. He may get the nod again tonight. Or maybe not. It's all in flux:

But head coach Tom Brands said his current 149-pound starter looked timid on the mat, and that needs to change.

Brands said six of his wrestlers are in contention for the 149-pound spot — and they know it.

"The weights that are up for grabs; it's not a secret," he said. "We want to see guys who are going out there to score points, and wrestle hard and smart, and do the things that puts them in contention to win championships."

As I keep saying, this battle isn't going to settled until at least Midlands at the end of the month. In the meantime, who knows? Chaos reigns. 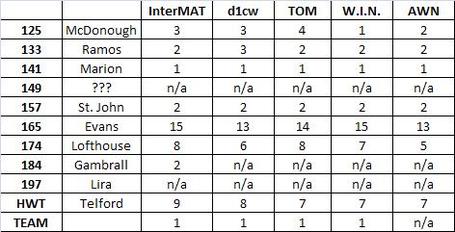 A little movement this week, thanks to an upset-filled weekend around the wrestling world. McD took a slight tumble in most rankings after his loss to Delgado. Ramos moved up slightly in most rankings thanks to his big win over B.J. Futrell. Lofthouse moved around slightly, although splitting his matches with Blanton and Spangler ended up just making things a bit of a muddle. But Montell Marion was the biggest beneficiary of all, moving up to the #1 ranking at 141 after both Kellen Russell and Boris Novachkov were upset at a tournament last weekend.

Based on the current rankings, Iowa would be favored to finish with 6-7 All-Americans and 3-4 finalists at next year's NCAA Tournament -- which would make them very difficult to beat. Of course, rankings don't guarantee a thing -- especially rankings in December.

Previewin'. As always, all rankings from InterMat.

125: #2 JR Matt McDonough (9-1) vs. SR Cruse Aarhus (10-6)
Assuming he's healthy, here's guessing McD is on a mission to prove his loss to Delgado last Friday was just an aberration. Poor Aarhus just happens to be next in line.
THE PICK: McD PIN Aarhus (Iowa 6-0)

149: JR Mark Ballweg (6-1) vs. RS FR Clay Welter (9-8)
It's very rare that I'd tab the Iowa guy at this weight, but this is an odd situation: Mark Ballweg did pick up a win for Iowa last weekend and UNI's guy at this weight is decidedly unimpressive. I think Mark comes out with a chip on his shoulder and a desire to prove himself as Iowa's best option at this weight.
THE PICK: Ballweg DEC Welter (Iowa 18-0)

174: #5 SO Ethen Lofthouse (8-2) vs. SO Kevin Sherrill (0-1)
Lofthouse has run hot and cold so far this year, but I don't think Sherrill is good enough to exploit Ethen's inconsistency.
THE PICK: Lofthouse MAJ DEC Sherrill (Iowa 29-0)

184: RS FR Jeremy Fahler (5-2) or SR Vinnie Wagner (1-1) vs. #5 SO Ryan Loder (15-0)
Loder is the only legitimately nationally elite wrestler on UNI's team -- and even he probably wouldn't be favored to win at this weight if Gambrall was healthy. But Gambrall isn't going here, so Loder should be able to pick up UNI's lone win.
THE PICK: Loder DEC Fahler/Wagner (Iowa 29-3)

197: JR Grant Gambrall (1-0) or SO Tomas Lira (8-3) vs. Taylor Kettman (8-4)
The more interesting question here is whether Gambrall gets a chance to knock off a little more rust (despite being listed here several times and wrestling a match at 197 earlier this season, it still sounds like the ultimate plan is for him to wrestle at 184 when he's fully fit) or whether Lira gets another go. I thought Gambrall would get a shot at 197 last week and didn't, so I'll stick with Lira to again get the nod here.
THE PICK: Lira DEC Kettman (Iowa 32-3)

HWT: #7 RS FR Bobby Telford (9-0) vs. JR Blayne Beale (10-5)
Telford was not quite able to bring excitement back to heavyweight wrestling last week, but things might be a little different with a more overmatched opponent this week.
THE PICK: Telford MAJ DEC Beale (Iowa 36-3)

With a healthy Gambrall at 184, I think Iowa would have an excellent opportunity to skunk UNI in this meet. UNI will be heavily favored to win at 184 and 149 and 197 look a little bit like toss-ups, given Iowa's well-documented woes there, but in general this should be an easy Iowa rout.