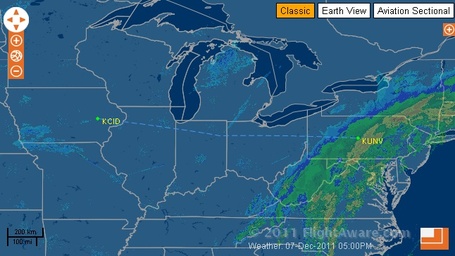 That is a private plane from Pennsylvania, scheduled to depart from Cedar Rapids to University Park at 4:40. It wasn't on the schedule this morning.

UPDATE #1: The plane's departure has been pushed to early tomorrow morning.

UPDATE #2 (we could really use that SB Nation Storystream thing right about now): Ken O'Keefe spent the day in Arizona scouting practice facilities for the bowl trip, per intrepid reader twsmith23. Kirk Ferentz was reportedly making in-home visits this week to recruits (landed a big one tonight, in fact; details tomorrow), and reportedly spent the day in Kansas City. Obviously, that makes it highly unlikely he's getting on a plane to Pennsylvania tomorrow morning, unless he was recruiting for a school he knows he's not going to coach or a school he doesn't yet coach. There is still a possibility, I suppose, but it looks awfully remote at this point.

The other possibility, broached in the comments by Lukateake, is that the plane isn't carrying someone from Iowa to PSU, but rather from PSU to Iowa. Namely, one of the bevy of assistant coaches with decades of experience under Paterno that are about to lose their jobs.

Or it's a research assistant picking up some stuff.