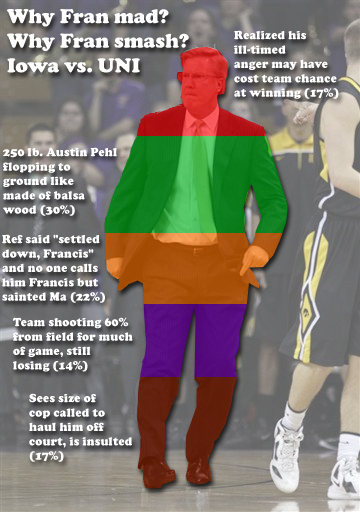 It would be a shame if the story of this game becomes: "Refs screw over Iowa, cost Hawks game", because there was so much else positive going on for the team prior to the moment Mount Franitubo went off with 9:45 left in the second half. In almost every area where Iowa had been struggling, they improved:

And this was all done without starting point guard Bryce Cartwright (major kudos to Devyn Marble for his play in Cartwright's stead, by the way -- more on this later). It was, despite the final score, a major step forward for this team.
The one area where the Hawks desperately needed to improve and didn't, unfortunately, was defense. Even though the free throw discrepancy may jump out at you when you look at the box score (33 for UNI, 9 for Iowa), the real story of the game was the power of the three-point shot. At first glance, Iowa out-shot UNI in terms of field goal percentage, 50.9% to 45.5%, but that just goes to show why field goal percentage is not the best statistic. If you add the proper weight to the 11 threes UNI made, the Panthers were the much better shooting team, going for an eFG% of 58.0% to Iowa's 51.8%. There are two problems here for Iowa: first, they still do a very poor job sticking with shooters on the perimeter. There seems to be a philosophy for Iowa on defense that if the ball ever enters the post, every nearby defender must sag in and help the post defender. If Iowa were a little longer and faster, that might work, but as it is, you often see three Iowa defenders guarding one man in the post and two men wide open on the perimeter. A simple pass out, or a series of passes, and opponents find themselves looking at wide-open threes. That is, shots worth three points as opposed to two points, which is what shots in the post are worth. It's a balancing act, I know, trying to stop easy post shots versus harder (but more valuable) perimeter shots, but this seems like an area where Fran may have to call off the dogs on defense and allow Brommer, Basabe and Archie to defend one-on-one. The college three is simply too easy a shot for many teams these days.

I didn't mention it earlier, but Devyn Marble played a fantastic game, on both ends of the court. He played the point for 37 minutes and had only two turnovers to go along with four assists, and created on offense again and again for the Hawks. Most impressive was his defense. He's officially credited with two steals, but seemed to have his hand on several other balls. He not only disrupted Northern Iowa's offense, he got out on the break and finished.

One of the under-reported stories of the year so far is the ineffectiveness of Bryce Cartwright, and I wonder how much his injury has slowed him down. The problem seems to be that Cartwright is effective only when he has the ball, but too often this year he has turned into a by-stander and spot up shooter on offense. That is not his strength. So having Marble in meant that the point guard was both more of a threat to score himself and more of a threat as an off-the-ball shooter, which seemed to free things up for the Hawks. I'm not saying Marble should be the starting point guard, but that Iowa needs Cartwright to be healthy and become the dynamic, creating player he was last year.