Share All sharing options for: UNI 80, Iowa 60: A Photo Essay

(Horace will no doubt be along with a more detailed Fran-Graph in the morrow, but for now this is my takeaway from the game. All photos courtesy the AP, unless otherwise noted.)

And this was halftime. (H/T to FOTP @storminspank) (More footage here.)

But then this happened.

And a little bit more of that happened. 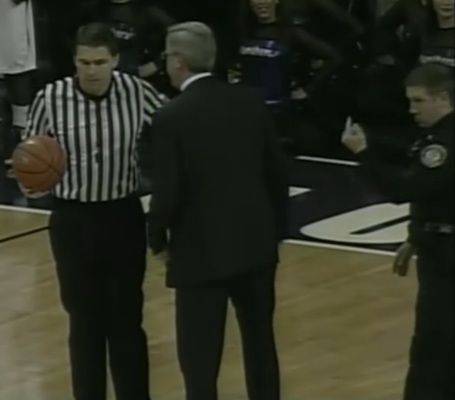 So is this what will happen next?

CEDAR FALLS — Northern Iowa’s four-year basketball contracts with Iowa and Iowa State expire this year, jeopardizing the school’s annual series with those schools after this season.

"We really haven’t gotten all the way into it yet," UNI Athletics Director Troy Dannen said. "We just know it’s up, and it’s not as easy as, ‘Here’s the contract,’ like we did last one.

"I don’t think anybody has decided exactly what we’re going to do going forward."

So what's our opinion on this game? Take it away, guest commentator Mika'il McCall:

Well, duh. Fran didn't get ejected -- he just had somewhere else to be. Probably needed to get home to watch the season finale of Sons of Anarchy.