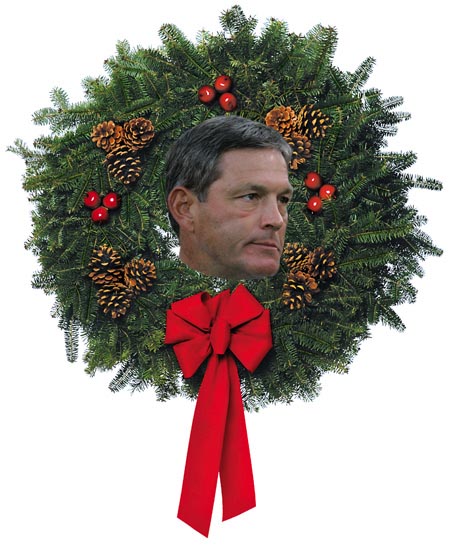 And I would personally like to put your team in my best hotel. I want nothing, but the best for Iowa State.

Really? But why us?

I'll tell you. I was flipping through the channels on my humungous television and something catches my eye: 50,000 people in red and yellow body paint... overalls... crazy wigs and I think to myself, this is America. People supporting the little team that could.

So you saw the Oklahoma State game? That was quite a showcase for the University.

Nah, you guys got crushed by Texas. Anyway, let me give you the address. So we can set something up.

Well, you really need to put it in a calculator. I only work in equations, that's why I'm rich.

Ummm. OK. Still not seeing it.

Turn it upside down.

Goddamnit. Don't get my hopes up like that Kirk. We're trying to get ready for a bowl game. Speaking of which, shouldn't you be doing the same? The Sooners are pretty darn tough.

Bowl preparation? Bah humbug! We've been ready for the bowl game for two weeks now. It's out of our hands. Now it's about the execution and using the extra practice to turn running backs into safeties. Jordan Bernstine meet Jordan Canzeri.

You know, some day your conservatism is going to catch up with you.

Sorry, I couldn't hear you over the all the sucking. Have fun in New York, don't forget the beach towel.

Later that night in the Ferentz bedchamber 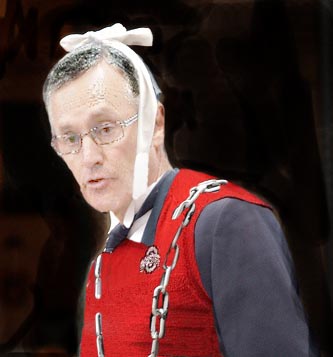 Jim, what the hell are you doing in my room? And at this hour too.

I am here to bid you a warning, change your ways. Or face the same fate as me.

No offense Jim, but I run a pretty tight ship. Nobody on my team is going to be trading memorabilia for tattoos. We have a good relationship with the NCAA, there's no lack of institutional cont---

Wait, is that really why you think you're not at Ohio State anymore? I'm pretty sure the reason you resigned was because of the NCAA violations.

Nope. Tresselball. And the same thing can happen to you.

Wait was he a ghost? I guess he did fall on hard times. (Yawns) Oh boy 9:45, I'm gonna pay for this tomorrow afternoon. 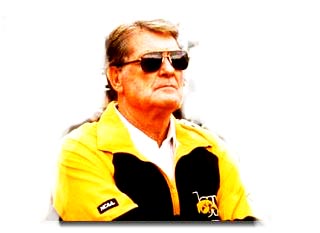 Calm down there son, you're gonna wake the neighborhood. I am the spirit of coaching past and we're about to go on a journey.

Coach Fry, I- I- I- have no idea what you're talking about.

Ferentz touches Fry's hand and instantly the landscape melts away, what appears in its stead is a practice field in the Northeast.

Ferentz! Get your butt over here right now.

Holy cow. It's my old coach at Connecticut Walt Nadzak. That man could turn a lump of coal into a diamond with just his hair.

And do you recognize that other guy.

Ferentz, you're a smart guy. What were you supposed to do on this play?

And what did you do?

I stayed at home, read the blocking and made the tackle.

That's great, but that's not what I wanted. I needed you to blitz there.

No offense coach, but blitzing is for gamblers. Not 21-year olds. I'd rather make my reads and oooh how about I cover a receiver.

Ferentz, are you joking with me right now?

I ran so many laps my last two years with the team that I was in the best shape of my life.

If you just would have listened to your coach, you might have found out that blitzing does have its place in football. (Looks around). Man, I miss the 70s, look at all those white pants. C'mon, we're headed somewhere else.

The practice field fades away and is replaced with a meeting room. Men of different ages sit at a table while a man stands at a chalkboard in a familiar wardrobe of sweatshirt and khakis.

Alright. We have the Steelers this week. This game means a lot and I want you to stress that to your players. Now I'm up to some ideas for how to attack that defense. Anyone?

That's Bill Belichick! Man, can that guy coach, he was a tough boss, but a fair boss. He taught me a lot.

Ferentz. Anything new from the offensive line this week?

OK, that's it for tonight guys. I'll see you back here tomorrow at 8 a.m. Kirk, can I see you for a minute?

Kirk, you've got a strong football mind and you've been a great line coach, but don't be afraid to try something new. I'm a risk-averse as anyone, but even I know that sometimes it's OK to be a little aggressive. Players respond to that, they want a coach who'll do anything to win, not one who'll do everything to not lose.

I'll keep that in mind.

Keep working at it and in the near future, we will both proudly say that the Cleveland Browns are Super Bowl champions

I remember this meeting. I stewed over it for a long time. Did I make the right choice?

I cannot answer that, but maybe the next spirit can.

Yep, I'm outta here. I have to go haunt Barry Alvarez and convince him not to a get a toupee.

But who's the next spirit?

Can I help you?

You have got to be kidding me.

Don't you just love coaching? The camaraderie, the traditions, the little pieces on each play that add up to something bigger. Do you know why coaches like Joe Paterno, Bobby Bowden and that handsome devil Norm Parker keep at it? Because there is a love there. Sometimes coaching becomes more than coaching, sometimes it becomes life. Also, I heard Parker's wife is a master at nagging.

Do you really think so?

Hell yeah. You should have heard her last week. Norm, take out the garbage. Norm, don't put your elbows on the table. Norm, the neighbors want you to have clothes on when you get the mail. Bitch, bitch, bitch.

No, not that. About coaching, is there a love there?

Of course. Nothing beats the joy of winning and there aren't many jobs that are more fun.

I'm not going to lie; this season has not been much fun. I think I cracked a smile after the Michigan game, but that's only because Brady Hoke farted during our handshake.

Even when things go wrong. Football and coaching can still be fun and I know just the man to prove it. Let's go.

Kirk and the spirit of coaching present (who looks a great deal like Norm Parker) once again leave the Ferentz residence and reappear seconds later in a tiny office that is not much bigger than Ferentz' pantry.

Not only somebody, but a fellow Iowan.

C'mon in guys, it's a little crowded, but it'll make do.

Yeah, thanks coach. Now what's the plan for Rutgers?

Guys, I think it's time to get a little creative, so I'm thinking on the first play of the game. We line up with six receivers. Nobody in the backfield. And then Barnett, you will go in motion, yell hike as you go by and the center will snap you the ball. All the receivers will run go routes and I want you to keep it for a QB draw, if this play doesn't score a touchdown, nothing will.

Coach, I love it

What?! Nothing about that play made any sense. In fact, I'm pretty sure it's illegal.

Yeah, but players respond to excitement and innovation. Their coach is willing to go out on a limb, might as well prove him right.

And Knott, we are going to blitz everyone. Linebackers, corners, safeties, defensive end. I might even send Cy on one of the blitzes, the Rutgers quarterback is not going to know what's about to hit him. Also I'm fooling around with 1-4-5-1 def-

Coach, can I talk to you for a second.

Ummm sure. Guys, I'll send an e-mail with more information and look for me on Call of Duty later.

Paul, I don't really know how to tell you this, but I just spent $100,000 on a hotel that doesn't really exist. We're going to need the players to drive themselves to the game.

What?! Jamie, are you kidding me? How could this happen?

OK, hear me out. I thought it was the real Donald Trump...

Just get out of here. (Puts head on desk).

Sorry, I can only see the present not the future, but if you had to work for this AD, in these facilities, would you stay? Ah, but that's something for the ghost of coaching future to answer. Remember this helpful rhyme: when you make football fun and players never want to see the season done. See you Monday, errrrrrrrrrrrrrrrr, never again.

Wait, don't leave. I don't think I can handle the ghost of Christmas futur--- 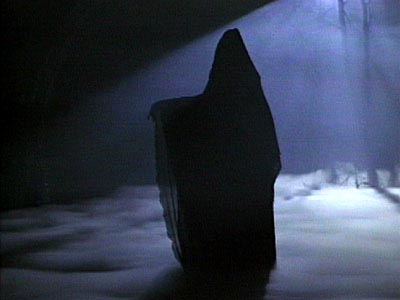 And great, he's already here. Well, let's get this over with. Follows ghost

It was kind of a long time coming. In the end, every step forward seemed to be accompanied by two steps back. Fans can handle moderate success as long as it is exciting, this was the exact opposite. Slow, plodding and unimaginative, in a word: boring.

I think the last straw, was the fake punt against Minnesota this year. Fool me once, shame on you. Fool me 23 times, shame on us. I'm glad the mistake is finally going to be corrected. Bring on somebody new.

I have just the Photoshop to describe how I feel. Sad.

Do you know who these people are talking about?

Wait a minute, is this the physical manifestation of the Internet?

Oh God, get me out of here. Bring me to something happier, livelier.

The duo leaves the Internet and move instead to a crowded stadium in Southern California.

Now this is more like it. Pasadena. The Rose Bowl. And even better, I'm seeing a lot of black and gold. Wait, what's with the blue and orange?

Hello, everyone I'm Brent Musburger. And now the game we've waited all year to see, they've been number one and two in the polls all season. Florida, led by Gus Malzahn and his high octane offense, versus the Hawkeyes from Iowa, led by the home state hero... Paul Rhoads!

I know I'm going to regret this. In fact, this is the scariest moment of my life, but who did Rhoads replace? Who were those heathens on the Internet so happy to see get fired. Who?

Before Ferentz can get an answer, the duo move through time again and return to a bedroom .

Kirk, what are you doing here in my home?

Kirk sits up in bed with a jolt; he's back at home with the alarm beeping and sun shining through the windows.

Dad, did you stay up past 10 last night? Now hurry up, we have a team meeting in a half an hour.

I'm still the coach. Yes! James, I promise you things will be different from now on.

Well, the season is going to come to a sour end for the Hawkeyes. In a weird turn of events, Iowa has thrown the ball 70 times tonight with James Vandenberg setting new Hawkeye records for attempts, completions, touchdowns and interceptions. The Sooners have taken advantage of Iowa's aggressive play, though, turning seven Iowa turnovers into 35 points and Landry Jones will take a take knee with Oklahoma up 63-42.

This was not a good idea.

Now who wants to give their coach a ride back to Ames?