Share All sharing options for: The League predicts a lopsided Insight Bowl

Do you guys watch The League on FX? You probably should. It's about five friends who live in Chicago and play in a fantasy football league. It's chalked full of witty banter and dick jokes, which is what I look for in a TV show. Scrotum.

However, I was watching a recent episode where they're discussing how it's weird watching football without having a vested interest and the cut-in shot was of the Insight Bowl featuring Iowa and Oklahoma.

And look at the fucking score: 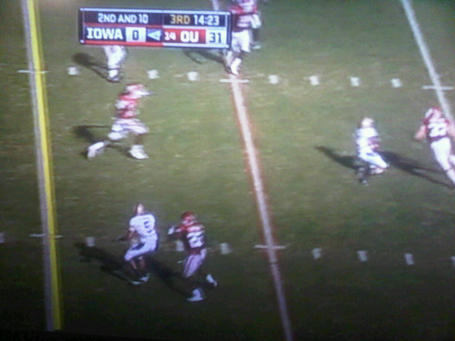 31-0 just after halftime? Not sure whether to be pissed off or to be frightened that it will come to fruition. I found it intriguing that they went through the trouble of choosing a real 2011 bowl matchup and even got Oklahoma's ranking correct, but the team that was supposed to be Iowa looks like Georgia Tech or Navy. Then, whomever on the staff of the show who's in charge of making this fictitious shot had to decide on a score and they decided to make it a goddamn slaughter. Ass.

So what do you think? Is this a glimpse into the future? Let's do a prediction thread. In fact, let's predict the score at the time in the screen shot. With 14:23 left in the 3rd quarter, I'll say it will be 21-20, Iowa. So, suck it. Then Iowa goes on to score 8 unanswered touchdowns and wins 77-20. Mark it, dude.

As a side note, StoopsMyAss knows Paul Scheer (Andre in The League). Maybe we'll get lucky and he'll stop by and tell you about it. If you didn't know this already, StoopsMyAss has some fascinating stories.