Share All sharing options for: Ferentz denies rumors that he just chopped off his own left index finger 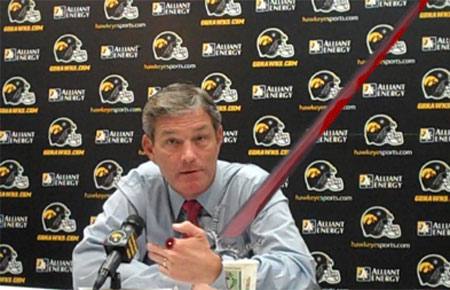 In a press conference yesterday held in preparation for today's Insight Bowl, Kirk Ferentz refused to comment on rumors that he recently -- like, just now -- chopped off his own left finger with a decorative sword.

When asked where he got the elaborately decorated replica medieval sword, Ferentz suddenly regained coherence and roared at the assembled press: "Ken O'Keefe is NOT a nerd! You take that back! He just really likes Game of Thrones... was my ... secret ... Santa... and who said anything about a sword?" Ferentz then looked intently at the 44-inch red sword in his hand and said: "Huh, that's odd... I can't seem to remember the names of whatchamacallit ... objects ... anymore."

Reporters then asked if he needed a towel, or an ambulance, but Ferentz responded: "Oh, I remember what you are called. You media. Coach Ferentz not ... like ... you." He then looked at the sword and said, "Huh, where'd this sword come from?"

A pool reporter then recovered Ferentz's severed digit from under a nearby vending machine, but when asked if he wanted someone to put it on ice, Ferentz snapped out of his reverie and strongly denied any connection with the alleged hand-part: "There is no confirmation that what you've got there is, you know, my finger. To introduce a little levity here, there are probably dozens of fingers underneath that vending machine. In any event, that's a medical issue and we would be remiss if we commented on that."

Reporters then tried to convince the veteran head coach of the urgency of his situation by showing him video taken seconds prior of Ferentz elaborately twirling the sword in an attempt to impress Oklahoma coach Bob Stoops, then losing control of the blade and slicing off his left pointer phalange, but the coach refused to confirm his own identity in the video.

Ferentz then lunged out of his chair and began to shout to no one in particular: "2004 Outback Bowl... 2005 Capitol One Bowl ... 2010 Orange Bowl... All these moments will be lost in time ... like tears ... in rain..." Ferentz then collapsed, whispering the words "Tell DJK ‘I'm sorry'" and "execution forever!" before losing consciousness.

Ferentz and his finger were rushed to a nearby hospital where university officials confirmed that he is being treated for an "unspecified ailment."