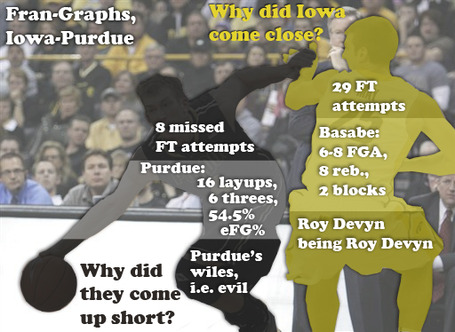 So close. So close. Iowa was down just two points with 4:13 left in the second half, but the next four field goals for Purdue represented the game in microcosm: D.J. Byrd layup, Lewis Jackson layup, Lewis Jackson layup, Kelsey Barlow layup. Iowa had 18 more free throw attempts than Purdue, shot well from the field (their eFG% was a decent 50%), and held Boilermaker star/figurine model Robbie Hummel to just 5-14 shooting, it was their inability to keep the opposition out of the paint that proved their undoing.

I note it up above, but 16 of Purdue's 33 made field goals were layups. Sixteen! And another six were three pointers. There are two areas on the court that, statistically, have the highest value in basketball: at the rim and the three-point line, and Iowa continues to allow opponents to live in these high value areas. The Hawks actually improved their three-point defense slightly in this game, limiting Purdue to "only" 6-20 on threes, but that improvement came at a cost, as Purdue used Iowa's aggressiveness on the perimeter against them to get into the lane and make short shot after short shot.

You can see the dilemma Fran McCaffery is facing: without a strong interior defender and with, let's face it, not the quickest one-on-one defenders, Iowa is mostly screwed if they play tight one-on-one perimeter defense. But they're also screwed if they sag off and allow opponents to bomb from three. And they're especially screwed if they switch to zone in the hopes of covering up some of the weaker one-on-one defenders, because Iowa's zone is truly execrable right now. The coaches made the strategic choice to not get beat from three in this game, and it was probably a wise choice, but they did pay a price.

Which is too bad, because on offense, this Hawkeye team looked very strong last night. Purdue fans will point to Iowa's 29 free throws (to Purdue's 11) as a sign of obvious home cooking, but I didn't see it that way. Iowa was accommodating enough to allow Purdue to get shots off at the rim cleanly and without interference; Purdue, on the other hand, chose to foul. Which is their way. Matt Painter must watch a lot of Celtics games, because the Boilermakers have learned the Garnett/Perkins/Pierce trick of never passing up an opportunity to give their opponents an extraneous shove, grab or push. When Purdue plays at home and those calls are ignored, it's a devastating strategy, but on the road, well, sometimes you give up 18 more free throw attempts.*

* Interesting note on the refereeing. The game seemed to be called one way -- fairly close, lots of fouls, lots of free throws for Iowa -- up until the 12 minute mark in the second half. Iowa had put Purdue in the bonus with 12 minutes left, and you might have expected Iowa to live at the charity stripe for the rest of the game. The next Purdue foul, though? It was called with 4:50 left in the game.

And the leader of the Hawkeye foul accrual brigade? Devyn Marble. Purdue decided to harass Marble with smaller guards as he brought the ball up court, but this resulted in severe mismatches once Marble got into the half-court. Marble used his speed, size and herky-jerky interior game to draw numerous fouls on Purdue, going to the line eight times. He looked a little nervous at the start, clanking two free throws (right after blowing a wide-open dunk that would have brought the house down), but he settled down and made five of his next six. Missed free throws were a bit of a problem for the Hawks (they went 21-29), but it amounted to a percentage (72%) pretty much in line with their season-long average. And when you look at who missed free throws (Brommer missed two, Aaron White missed one, Basabe missed one, Marble missed three), only Marble's shooting was all that surprising.

The Hawks seem to have figured out an offensive strategy that sort of works: they can't really shoot threes all that well, so they rely on getting the ball in the lane, drawing contact, and making foul shots. Marble is key to this strategy, but Purdue seemed to catch on as the game went along. Whereas in the first half they challenged Marble as he went up, allowing him to create contact and thus draw fouls, in the second half, they seemed to bait him into charging at them, only to withdraw at the last second. Marble seems to need that contact to slow him down and steady him as he goes up for the shot, so when it isn't there, he tends to rush uncontrollably at the rim and miss his shots. Marble's good enough that he'll develop a rep as a foul-drawing player, and teams will adjust, so he needs to come up with a counter for the old "pull-the-chair" defense. A simple jump-stop in those situations would allow him to control himself and leave him with deep position in the paint against an off-balance defender. Whatever he does, he needs to learn the lessons that famous foul-drawers like Manu Ginobili and Dwyane Wade learned before him: defenders will adapt to lane-crashing ways by backing off from contact, and players need to have counters ready to take advantage of that.

In the big picture, though, despite all the defensive troubles, the Hawks seem to be figuring out some ways to compete and, just as importantly, have learned which players they can trust on defense. The Hawks functioned best on that end when they had Basabe, Gatens, Marble and Eric May all on the court at the same time. May had probably his best game of the season, although his stat line was not amazing (nine points on 2-7 shooting, six rebounds). To see his impact, you need to look at the shooting of the man he guarded for much of the game: Robbie Hummel. May was a bit too aggressive at times, but he is pretty much the only Hawkeye with the strength and speed to match up with big, quick scorers like Hummel. As the season goes on and Iowa faces more of this type of player -- William Buford and Deshaun Thomas on Ohio State, Christian Watford and Victor Oladipo on Indiana, Tim Hardaway Jr. on Michigan, etc. -- it will be essential for May to stay on the court. The only problem is that his offense still looks very uncertain -- he had a particularly bad moment last night where he had an open three and an open layup available to him, couldn't decide between the two, and traveled -- but if he could become a plus on that end of the court, too, Iowa could at least throw out one strong two-way line-up. The problem last night, unfortunately, was that Fran McCaffery had to use that best line-up a lot, and the fatigue started to show down the stretch. Gatens played 36 minutes, Marble played 35, and Basabe played 33. It would be especially nice if Brommer could provide Basabe with some effective rest, but Iowa's defense seemed to fall to pieces whenever Brommer went in, and he wound up only playing six minutes. Aaron White and Zach McCabe make up a pretty good small forward platoon, and Bryce Cartwright and Josh Oglesby give relief at the non-Gatens guard spot, but center is still a weak spot that Iowa is covering up with baling wire and paper mache.

But the best thing about the game, despite the loss, was the atmosphere at the game. And I mean in the literal, barometric sense. I was at the game, and there must have been at least 10,000 people there (official attendance was 12,526). There's an interesting phenomenon that happens at Carver when 12,000 living, breathing human beings fill it up: it seems to get warmer, and -- I could be imagining things -- a kind of haze seems to form over the court from all the water vapor in the air. In past years, the atmosphere at Carver was cool and bone-dry, but last night, it had the physical atmosphere of a place where competitive basketball was played.