University of Iowa officials revealed today that running back Marcus Coker, who was suspended yesterday from the team's bowl game, had violated a school policy barring athletes from trading tattoos for memorabilia. This is the second tattoo-for-memorabilia scandal to strike the Big 10 in the past year. Similar revelations emerged at Ohio State University last fall, although Iowa officials were quick to point out that Coker's violation differed in important respects from those that took place at Ohio State.

In response to the befuddled looks on the faces of many reporters at the press conference, Sewell elaborated:

"You heard me: he gave tattoos in exchange for memorabilia. Also, it wasn't even football memorabilia. It was mainly merchandise related to the original run of Carl Sagan’s show Cosmos." Sewell then proceeded to produce a ten-page list of items Coker is alleged to have acquired. "Let's see, we have... a signed copy of the Cosmos book, a red turtleneck game-worn by Mr. Sagan himself, the complete soundtrack by Vangelis, the rare Sagan action figure... it goes on like this."

When asked to identify the recipients of Coker’s tattoos, Sewell pleaded ignorance.

"The fact is we just don’t know. Marcus is active on the alt.tv.cosmos group, which is apparently still a thing, and we discovered dozens of messages where he set up tattoo-for-merch exchanges."

Sewell produced one such message, which read in part: "Yo, you know my deal: ink for Cos s**t, any and all."

Sewell was asked whether university officials discovered the infraction through the message board, and responded: "Are you kidding? Who goes on those message boards any more? Honestly. Have you? If so, are you a time traveler from the year 1995? No, we put it together based on a Facebook post."

Officials reportedly became suspicious when the following image showed up on the Facebook wall of renowned astrophysicist (and future Cosmos re-boot host) Neil Degrasse Tyson, accompanied by the message "Check out the new ink the Grasse-man got from a big -- and I mean BIG -- astrophysics fan. And all it cost me was a foam model of Jupiter!" 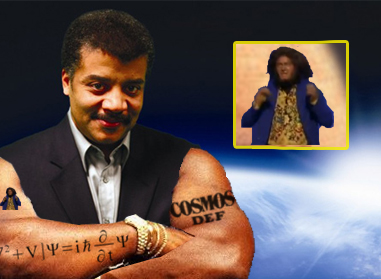 Sewell quickly deduced that something was amiss: "Everyone knows NDT loves ink, but I noticed something unusual in this photo: a small tattoo on his right bicep that, at first, I thought was Jesus. But the paisley shirt and the known godlessness of most scientists tipped me off: it was the Coked-up Werewolf. That’s Marcus’s logo and sort of his alter-ego. He’s got it drawn all over his school notebooks, got a picture of it in his locker, he even has business cards." 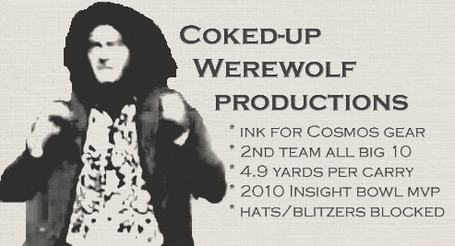 When asked what he was doing browsing through pictures of Neil Degrasse Tyson tattoos, Sewell responded, "no comment."

"But to get back to the cards: in retrospect they should been a clear tip, but I assumed Marcus was just a big soccer fan."

When asked whether Coker had, in fact, violated school rules or whether he had merely performed a service unrelated to football in his spare time, Sewell acknowledged that Coker’s actions fall into a gray area.

"Legally, there’s nothing wrong, per se, about a student working as a private tattoo artist and taking his pay in the form of memorabilia from a 1978 television series. But we figured that any story featuring the words "tattoos for memorabilia", "Iowa hawkeyes" and "coked-up" was sure to go right to the top of Google News. Did you hear me? RIGHT TO THE TOP OF GOOGLE NEWS. It would be like some unholy combination of a story about Kim Jong-Il's death, Nicki Minaj, and the new Hobbit trailer. There would be billions and billions of hits. We couldn't allow that to happen. So we took a precautionary approach and just suspended him."

Sewell explained that, officially, Iowa had suspended Coker for failing to report outside income, but cautioned that Coker might have a case for appeal. "Most of this Cosmos stuff is literally worthless. Like, you would have to pay people to take it off your hands. So I'm not sure we've got him there. But in any event, he won't be playing in the Insight Bowl."

Sewell would not comment on rumors that the entire Iowa offensive line has been mowing lawns in exchange for complete DVD sets of Upstairs, Downstairs.