How The Stoops Stole The Insight Bowl

Share All sharing options for: How The Stoops Stole The Insight Bowl 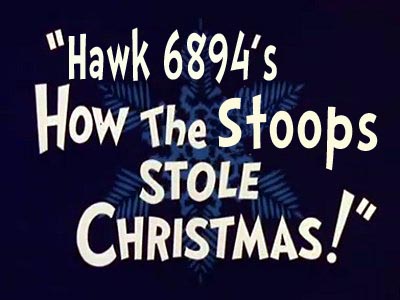 Welcome in the Tempe night

Welcome bowl game, while we stand

Brat to brat and beer in hand

Every Hawk fan down in Iowa liked bowl games a lot

But the Stoops who lived just South of Iowa did not! 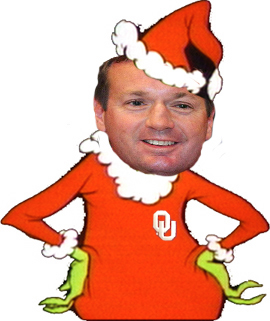 Now, please don't ask why. No one quite knows the reason.

It could be, perhaps, that this season was again underachieving.

It could be his stable of running backs were all pretty much leaving.

But I think that the most likely reason of all

May have been that this bowl game was two sizes too small.

But, whatever the reason, the losses or the long talks,

He stood there on Christmas Eve hating the Hawks,

Staring down from his mansion with a sour, Stoopsy frown

At the warm lighted windows below in their college town,

For he knew every Iowan down in Iowa City

Was busy now hanging at a bar getting shitty.

"And they're not even worried about the Insight," he snarled with a sneer.

"Tomorrow is Christmas! The bowl is practically here!"

Then he growled, with his thin fingers nervously drumming,

"I must find some way to keep this bowl game from coming!

For, December 30th, I know all of those Hawk fans

Will wake bright and early. They'll rush for their beer cans!

And they'll shriek squeaks and squeals, standing on their corn fed heels.

The Hawks will run stretch plays, looking to get *name redacted* in space.

There is no suspense. They'll stay in their stations.

They’re as easy to read as a two-inch putt. It’s so easy to demean.

And the fans will eat it up, no matter the view

They’ll chant Go Hawks! And spell the state’s name too.

Don’t they know that Arizona is for retirees looking for tans.

Then the Hawk fans, young and old, will sit down for a drink.

Templeton Rye is a drink I don't have a chance to buy!

And then they'll do something I hate most of all!

Every Hawk fan down in Tempe, the tall and the small,

They'll stand close together, with the marching band ringing.

They'll stand hand-in-hand, and those fans will start singing!"

Our friends will be drinking all the beer.

And the more the Stoops thought of the way drunk Hawk fans sing,

The more the Stoops thought, "I must stop this whole thing!

I must stop this bowl game from coming! But how?"

Then he got an idea! An awful idea!

The Stoops got a wonderful, awful idea!

"I know just what to do!" The Stoops laughed inside.

"I'll make a quick blond wig and bulge my eyes out wide."

And he chuckled, and clucked, "What a great Stoopsy strike!

With this wig and this face, I'll look just like brother Mike!"

"All I need is an interview." The Stoops looked at the phone.

"But their athletic director is pretty sharp." He said with a groan.

Did that stop the Stoops? Hah! The Stoops simply said,

So he took out his phone, and he asked his buddy Kirk for a favor.

And Kirk just couldn’t say no and be a bad neighbor.

"Let’s see the Hawk fans cheer down 60," the Stoops gloats

Then the Stoops said "Giddyap!" and pilot took to the air

Toward the homes and offices where the Hawks lay a-snooze after doing a ninth shot on a dare.

All their windows were dark. No one knew he was there.

All the Hawks were all dreaming sweet dreams without care

When he came to the first little office building of the square.

"This is stop number one," the new Mike Stoops hissed,

As he came to the door, the camera in his fist.

The door was not even locked, so the Stoops walked right in

An empty trophy case was the only thing to see his ugly grin.

He found the office he wanted, that sneaky alum.

On the whiteboard, Iowa’s four running plays hung all in a row.

"These stretch plays," he grinched, "are the first things to go!"

Then he slithered and slunk, with a smile on display,

Around the whole room, and he took every play! 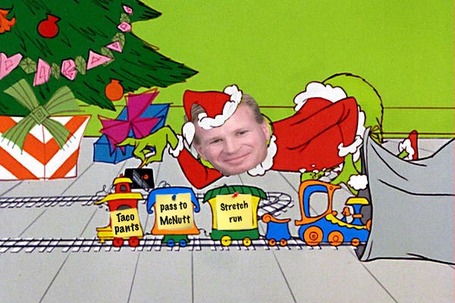 And he stuffed them in bags. Then the Stoops, very nimbly,

Stuffed all the bags, one by one, in his Bentley.

When he returned to the office, he stated with glee.

As the Stoops took Norm’s binder, and put it in a bag to store,

He heard a small sound just outside the door.

He turned around fast, and he saw the small cleats!

Little Dominic Alvis, who was no more than five feet.

Alvis stared at the Stoops and asked, "Why Mike, why,

Why are you taking Norm’s defense? Why?"

But, you know, that old Stoops was so smart and so slick,

He thought up a lie, and he thought it up quick!

"Why, my sweet little tackle," the fake Mike Stoops lied,

"I want to know more about the defense for when I’m on your side.

So I'm taking it home to office, my friend.

I'll make some changes, and make you starting defensive end." 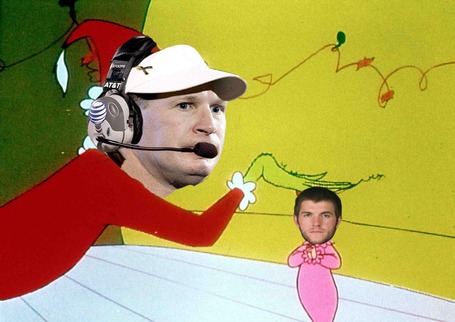 And his fib fooled the sophomore. Then he patted his chest,

And he got him some Gatorade, and he sent him back to Hillcrest.

And when Dominic Alvis was in bed with his cup,

The Stoops took the defense anyway, and locked the place up!

And the one thing the Stoops left was a crimson bucket

With a note inside, telling the Hawkeyes to "Suck It".

Then he did the same thing to the other Hawk places,

He couldn’t wait to see their fat, tear-filled faces!

It was quarter of dawn. All the Hawks still a-snorin,

The next morning, the Stoops opened his newspaper and loved what he saw

"Pooh-pooh to the Hawks!" he was grinchily humming.

"They're finding out now that no bowl victory is coming!

They're just waking up! I know just what they'll do!

Their mouths will hang open a minute or two

Then the Hawk fans down in Iowa City will all cry boo-hoo!

That's a noise," grinned the Stoops, "that I simply must hear!

The Sooners will be ready for the Insight Bowl. And then 2012 will be our year."

And a week later the Stoops did indeed hear a sound rising from the stands that were filled.

It started in low, then it started to build.

Are friends will be drinking all the beer

But this sound wasn't sad!

Why, this sound sounded glad!

Every Hawk down in Tempe, the tall and the small,

Was singing without any regrets at all!

He hadn't stopped the bowl victory from coming! It came!

Somehow or other, it came just the same!

And the Stoops, with eyes as wide as a buck,

Stood puzzling and puzzling. "What the f**k?

It came without fullbacks, safeties, or tight ends!"

He puzzled and puzzed till his brain was sore.

Then the Stoops thought of something he hadn't before.

And what happened then? Well, in Iowa City they say

That the Stoops turned over a new leaf that day!

And then when the true meaning of bowl preparation came through,

The Stoops knew exactly what he needed to do.

The Sooners became more conservative, using recruits with stars one or two.

Oklahoma fans, though, are not as understanding as those clad in black and gold

The Hawkeyes, though, turned out to be the Stoops’ shelter in the storm

And that following season, Iowa found its new Norm.

Now none of this will ever happen, and this Who is personally ready for a flop

But because it’s my story — hell, let’s do it once more from the top!

Our friends will be drinking all the beer.