We Must Break You: Finally, Real Competition

Share All sharing options for: We Must Break You: Finally, Real Competition

We Must Break You is the weekly rundown of Iowa wrestling news, rankings, and previews.

This can also serve as your open thread to discuss the Iowa-Illinois dual later this evening; see below for detais.

This is what Tom Brands thinks of your stalling calls...

Stalling is not winning. There were a lot of stalling calls made during last week's Iowa City Duals and Tom Brands was not particularly happy about it:

But while some may be concerned that the abundance of stalling calls could be the result of a recent NCAA rule change, Iowa head coach Tom Brands said he believes they were the result of Exline's interpretation of the rule.

The definition of stalling was slightly vague in 2010, but a clear definition was included in the rule book when it was amended prior to this season. Stalling is defined in the 2011 rule book as "one or both wrestlers attempting to avoid wrestling action as an offensive or defensive strategy."

Brands said he believes Exline took too many liberties to call stalling at Iowa City Duals.

"I'm not sure that the rules — as they were interpreted by that particular referee — are how they were supposed to be interpreted," he said. "That referee is notorious for calling stalling, and these new rules probably gave him justification in his own mind."

Criticizing referees? Honey Badger Tom Brands don't give a fuck. I would pay good money to hear Fran McCaffery's honest opinion of Ed Hightower or Kirk Ferentz's honest opinion of Dave Witovet. Alas. In any event, the rule changes this year regarding stalling should be quite positive, especially for a team like Iowa that thrives on attacks and is often stymied by opponents' stalling (called and uncalled).

Wrestling great Dan Gable opened his speech at this year’s Iowa City/Coralville Area Convention & Visitors Bureau annual luncheon by telling the audience about the time he pooped his pants as a college freshman before the first round of a wrestling championship — and still won.
"I don’t think I should have told that," Gable said after the story.

Are you going to give Dan Gable grief about pooping his pants? I didn't think so.

That's Dr. Kick Your Ass, thankyouverymuch. Vinnie Wagner made a slightly unexpected comeback this season, nominally to challenge for the vacant 197 spot, but he's ended up tag teaming with Jeremy Fahler to occupy the 184 spot while once and future starter Grant Gambrall rehabs from an off-season concussion. Juggling regular undergraduate coursework with a spot in a sport as demanding as wrestling is impressive enough; doing so with medical school coursework is downright stunning.

Iowa Coach Tom Brands shared a story last week about Wagner having a conflict with a test and asked what time it was scheduled. He didn’t realize it was a six-hour long exam that consisted of a written test and lab practical.

"He’s an eternal optimist," Brands said before a practice. "If anyone can do it, he can."

I doff my proverbial cap to Wagner; even if he never wrestles much for Iowa this season, he's accomplishing a great deal all the same. 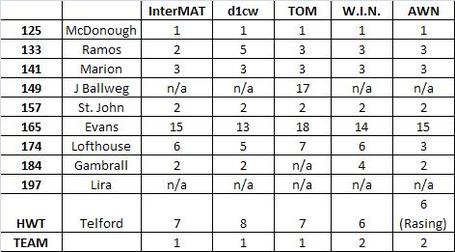 Not a great deal of changes here. Gambrall moved up a spot in a few rankings with former #1 Quentin Wright's loss, despite wrestling just one match himself. Evans and Rasing have established themselves in most of the rankings (except for AWN, who still thinks Rasing might get the spot at HWT, I guess) and should start moving up with more wins (and a few losses from the guys in front of them).

133: #2 Tony Ramos SO (8-0) vs. #3 B.J. Futrell JR (9-0)
Ah, here we go: match of the dual and, frankly, match of the weekend -- possibly anywhere in the country. This is an NCAA final-worthy matchup (although it likely won't be, what with Oklahoma State's Jordan Oliver also lurking out there) and a very possible Big Ten Tournament final preview. With Andrew Long's departure these two look like the class of the Big Ten at 133 and two very evenly matched wrestlers. As Ramos notes, they've wrestled each other since they were kids, with Futrell usually coming out on top (indeed, he beat Ramos at Midlands, 9-6, last year). Ramos finally got one-up on Futrell at Big Tens a year ago (a 6-2 win in the 3rd place match). Can Ramos keep turn that one win into a winning streak? I think this is a coin-flip result, but I'm going to lean with Tony the Tiger winning a close, high-scoring match.
RAMOS DEC FUTRELL (Iowa 7-0)

157: #2 Derek St. John SO (8-0) vs. UR Jackson Morse SO (4-1)
Morse is a solid wrestler with some quality early results (four bonus point wins, including a major decision win over #18 Brian Tannen (Lehigh)) so he should be the stiffest challenge DSJ has faced yet this season. DSJ still looks too smooth and too dominant to be upset here, though.
ST. JOHN MAJ DEC MORSE (Iowa 15-3)

165: #15 Mike Evans RS FR (8-0) vs. UR Dan Stelter JR (4-1)
Evans has so far lived up to the hype and while a real challenge awaits him against Iowa State, the Illinois dual looks like another opportunity for him to strut his dominant stuff.
EVANS MAJ DEC STELTER (Iowa 19-3)

174: #6 Ethen Lofthouse SO (7-1) vs. #3 Jordan Blanton JR (10-0)
And here's the other match of the dual, if not the weekend. Balanton was an All-American two years ago, but injuries kept him out of action for virtually the entire 2010-2011 season. He's back and off to a flying start this year, slicing through the competition (10 wins, all but one with bonus points). That said, he and Lofthouse will represent easily the stiffest challenge either wrestler has faced so far, so this will be a good indication of how good each guy is at this point in the season. Lofthouse looked better last week, but the stumble at Lindenwood concerns me just enough to lean Blanton here. It should be a very close match, though.
BLANTON DEC LOFTHOUSE (Iowa 19-6)

184: UR Jeremy Fahler RS FR (5-1) OR UR Vinnie Wagner (1-0) vs. UR Tony Dallago SO (7-3)
Fahler and Wagner are filling in while Gambrall works back to fitness; Dallago has had a decent start to the season so far with a handful of solid wins and a respectable loss (9-5) to current #1 Robert Hamlin (Lehigh). He seems a bit stronger than either Fahler or Wagner right now.
DALLAGO DEC FAHLER/WAGNER (Iowa 19-9)

HWT: #7 Bobby Telford RS FR (8-0) vs. UR Pat Walker JR (9-4)
Outside of Evans, Telford's had the most exciting start to the season for an Iowa wrestler, racking up bonus point wins with a fierce, attack-heavy style that's winning over fans rapidly. Walker will be an intriguing test for Telford, though -- he's very big and has performed respectably against ranked opponents this year (a 5-2 loss to #14 Brendan Barlow (Kent State) and a 2-0 loss to #1 Zach Rey (Lehigh)). If Telford is able to pull off a bonus point win, that will be mighty impressive. I'll settle for a run-of-the-mill win, though.
TELFORD DEC WALKER (Iowa 22-12)

Make no mistake, though, this is an intriguing meet. Illinois should be favored in three matches (149, 184, 197) and there are two toss-up matches (133 and 174) that could easily go their way. On the other hand, Iowa has the better shot at earning bonus points (particularly at 125, 141, 157, and 165), which should push the match in their favor even if Illinois wins five of the meet's ten matches.

#1 Iowa (3-0) vs. #23 Iowa State (0-5)
125: #1 Matt McDonough JR (8-0) vs. #10 Ryak Finch RS FR (8-1)
The second of two quality opponents McD will square off with this weekend; neither Finch nor Delgado are elite wrestlers (yet), but they're certainly better than the guys McD has wrestled to this point. They should provide a nice little test for seeing how sharp McD is this early in the season -- here's guessing he's pretty sharp.
McD MAJ DEC FINCH (Iowa 4-0)

133: #2 Tony Ramos SO (8-0) vs. UR Shayden Terukina FR (4-3)
Poor, poor Mr. Terukina. A true freshman being thrown to the lion that is Tony Ramos? Better eat your Wheaties, Shayden, because it's gonna be a long day.
RAMOS TECH FALL TERUKINA (Iowa 9-0)

157: #2 Derek St. John SO (8-0) vs. UR Michael Moreno RS FR (0-3)
Now this is the St. John everyone expected to see from the beginning of the year last year: smooth, tenacious, and dominating. Injuries, illness, and/or problems with the weight cut contributed to DSJ's sluggish start a year ago, but he's looked very strong so far this year. I think he keeps it up here.
ST. JOHN MAJ DEC MORENO (Iowa 17-3)

165: #15 Mike Evans RS FR (8-0) vs. #5 Andrew Sorenson SR (9-0)
And now we come to one of two headline matches for the dual. This match will be Evans' first genuine test of the season; he's looked awesome so far, but he's also been laying waste to decidedly lesser competition. Sorenson is a top-5 wrestler with loads of experience; he should be a very stiff test for Evans. As high as I am on Evans, I can't pick him to win this match just yet -- maybe in a few months, but not now.
SORENSON DEC EVANS (Iowa 17-6)

174: #6 Ethen Lofthouse SO (7-1) vs. #10 Chris Spangler JR (2-1)
And this would be the other headline match of the dual. Lofthouse has looked good this year aside from his stumble in the finals at Lindenwood; it was nice to see him bounce back after that and just dominate the competition at the Iowa City Duals this weekend. This is a big weekend for Lofthouse, since he wrestles a pair of top-10 opponents. A good showing will stamp him as a serious contender for All-America honors. I think he wins a close one over Spangler.
LOFTHOUSE DEC SPANGLER (Iowa 20-6)

184: UR Jeremy Fahler RS FR (5-1) OR UR Vinnie Wagner SR (1-0) vs. #15 Boaz Beard SO (4-1)
Again, with Gambrall still working his way back into shape, either Fahler or Wagner will man this spot in this meet. Fahler has been one of the more pleasant surprises of the season, as a less-heralded guy who's racked up some lopsided wins. Admittedly, the level of competition hasn't been great, but he's looked explosive and dangerous, which is encouraging. Still, after reading about Wagner's insane time management skills, it's tough to root against him. Beard is a quality wrestler, with a win over #17 Erich Schmidtke (Oklahoma) and a loss (9-2) to #8 Chris Perry. Either Fahler or Wagner will give it a game effort, but that probably won't be enough here.
BEARD DEC FAHLER/WAGNER (Iowa 20-9)

HWT: #7 Bobby Telford RS FR (8-0) vs. #19 Matt Gibson JR (8-1)
These two tangled at Midlands last year; Telford came away with a 2-1 win. Gibson is an unusually tall heavyweight (6-6) and has undoubtedly gotten better since their last match -- but so has Telford. In fact, based on early results, he's gotten quite a bit better. He looks like a beast so far.
TELFORD DEC GIBSON (Iowa 26-9)

This, on the other hand, should be a more comfortable Iowa win. Iowa State has high-end options at roughly three weights (125, 165, and 174), as well as decent options at 184 and HWT. And they may be able to exploit Iowa's weakness at 149 and 197. But Iowa should have excellent opportunities for bonus points in several matches.