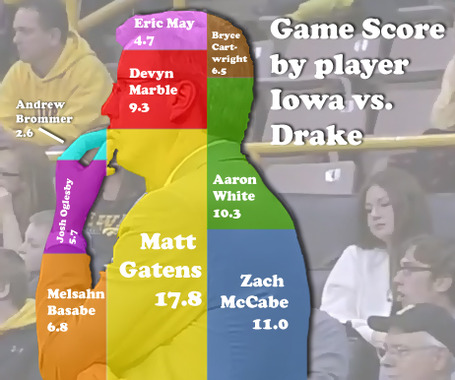 This graph requires a little explanation. First, what is a "game score"? It's a statistic developed by ESPN stat guru John Hollinger to represent in a rough way a player's individual contribution in a game. The equation can be found here, but basically it crunches all the box score stats (points, field goals made and missed, rebounds, assists, etc.) into one big number (it's designed to work like points, so 10 is average, 40 is exceptional). It's not perfect: for one, it's designed for the 48-minute NBA game, so each number should be bumped up a bit for college, and it's liable to ignore any defense that doesn't show up as a block or steal -- but it does give you a general idea of who did well. And against Drake, Matt Gatens was the clear star. Twenty points on efficient 7-14 shooting, six rebounds (three offensive), two assists, three steals, one turnover? That'll do. And that doesn't really represent the contribution Gatens made shadowing Drake star Ben Simon all game.

After Gatens, there were solid efforts all around, especially by Zach McCabe and Aaron White, who took advantage of Drake's meager size to get multiple offensive rebounds and easy points inside. Devyn Marble led the team in assists and kicked in 10 points, Melsahn Basabe had a decent game (although a few too many turnovers) with 10 points, five rebounds and two blocks, and Bryce Cartwright made up for 2-9 shooting from the field with 8-8 shooting from the line. The numbers kind of tell the story of the game: apart from Gatens, there weren't any spectacular individual performances, just a well-rounded team effort. Two numbers sum up this game pretty well: 47.2% and 41.9%. Those are Drake's effective field goal percentage and Iowa's offensive rebounding percentage.* After several games where Iowa struggled to keep their opponents from going above 60% on the former and to push themselves above 20% on the latter, the Hawks made huge strides. And they needed to. As the last "real" game before the Big 10 schedule starts up, Iowa fans had not been given much to be hopeful about. Now? Well, let's not go nuts, but there were several positive signs here.

1) The defense, back from the dead

Major kudos to Matt Gatens for playing 40 minutes and holding Simon to just five points. Drake coach Mark Phelps said "I thought (Gatens) used his physicality well with Ben," which, according to my coachspeak-to-English dictionary translates to "I thought (Gatens) was fouling the hell out of Ben." From my perspective, it looked like someone had told Gatens to never, ever switch off of Simons for any reason, and to deny him the ball on the perimeter. He stuck to him like glue throughout the game, and Simons just didn't get the ball that often. As far as the rest of the team went, everything looked much sharper on the defensive end. Players switched and recovered more quickly than they had the past few games, and the team used its pressure to effect, netting 12 steals and 6 blocks. Basabe even made his presence felt on defense, getting two blocks and looking much more active than usual. It wasn't all success, though. Drake had plenty of wide-open looks from three. Luckily for Iowa, they weren't going in this time.

2) Offensive rebounding, also back from the dead.

Iowa shot a decent percentage (their eFG% was 52.6%), but they gave themselves a major boost by actually generating a few offensive rebounds (13 in 31 opportunities). I wouldn't read too much into this, because Drake is one team that makes Iowa look big: their only "center" was 6'8", 250 lb. Jordan Clarke, and he managed to get 10 rebounds (6 offensive) in just 12 minutes of play. So... yeah, you have to grade Iowa on the curve here, and in light of the challenge posed by Drake, their performance here isn't anything to get that excited about. But at least they used the advantages they did have.

3) The Pick and Roll

This was more of a first half thing, but Iowa actually went to the pick and roll a few times and managed to get a handful of dunks out of it. Drake must have realized at some point that it's better to force Iowa to shoot jumpers than take layups, because the easy P-R looks dried up after a while. Still, for a team as offensively challenged as the current Iowa squad, it's worth noting when something works, even for a little while. Iowa actually has some pretty athletic finishers (Basabe, May, White, Marble) as well as some decent passers (Cartwright, Gatens, Oglesby, Marble), so a simple pick and roll might be just the trick to combine those two skill-sets in a productive way.

4) Settling on a rotation

It's interesting to watch as the line-ups get jiggled around and see as certain combinations of players start to work well together. During the crucial run in the first half that pushed Iowa's lead to 14, the line-ups used were Gatens-Marble-White-Oglesby-Basabe, Gatens-Cartwright-McCabe-White-Oglesby, and Gatens-Cartwright-McCabe-Brommer-Oglesby. I don't want to read too much into this short span, because it was just five minutes and the opponent was a size-impaired Drake team, but still... these are kind of fun line-ups, no? The most intriguing aspect of these line-ups was the Gatens-White-Oglesby triad. The thing that makes scoring so difficult for Iowa, generally, is that teams know exactly who can shoot from three (usually just Gatens) and who can't, and they mark the one shooter closely and sag in on everyone else. This makes getting any kind of movement on offense slow torture. But with Oglesby, White and Gatens in at the same time, there's at least a little doubt about who the defense should be afraid of. Add in another versatile offensive player like Marble, McCabe or Cartwright, then somebody to play the five, and you sort of have an offense.

With all that said, it wasn't the prettiest game overall. Iowa had that one big run, then more or less played Drake even the rest of the game, relying pretty heavily on drawing fouls to generate points in the second half. And the Hawks still allowed an opposing player to go off for 20+ points. And it was just Drake, who were played most of the game without even a true power forward, let alone center. But Iowa won in convincing fashion and made definite progress on all the fronts that had been causing them trouble, so kudos, and kudos again.